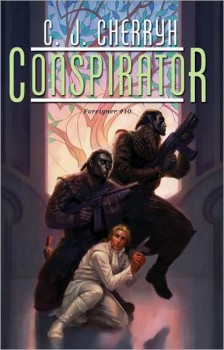 Here is the set-up: a lost human spaceship called Phoenix found itself in a Sun-like solar system with an Earthlike world. Low on resources, Phoenix established a small colony on the new world, grabbed what it needed, and then left to try to get its bearings. Meanwhile, the colonists discovered their new home already had intelligent life: the atevi, eight feet tall humanoids, with black skin and exotic golden eyes. The medieval atevi were eager to trade for better tech. And the humans were certain that Phoenix would come back soon. She didn’t.

Gradually the colonists acquired enough atevi language to feel confident, unwisely, that they understood their neighbors. When the inevitable gross misunderstanding happened, the humans were nearly wiped out. The survivors forged a fragile peace and accepted resettlement on Mosphiera, an island off the coast of the atevi Western Association. Only one human is allowed on atevi soil now: the paidhi, part diplomat and translator, ambassador, technical analyst, and (so everyone assumes) spy.

Translation is never a perfect art. The paidhi must be a skillful mix of linguist, psychologist, and politician. And always at the back of his or her mind is the memory of a misunderstanding between species that nearly became total genocide.

Bren Cameron is the current paidhi – despite recent events that had conservative human politicians calling for his removal, and even his own family’s concerns that he may have “gone native”. Bren still has not worked out exactly what the atevi concept of man’chi means either, but he understands enough to know it is the strongest tie possible between atevi. It is something like ‘like’, but the atevi have no words for “friend,” “love”, or “like.” Alliance, association, partnership, romantic affair, marriage – everything rests on the depth of one’s man’chi. It is a survival mechanism bred deep into atevi brains and hearts, along with a healthy sense of paranoia.

Man’chi in the Western Association has been in flux just as human society has been shaken up by recent events. Bren’s atevi boss, the ruling aiji Tabini, has only barely managed to hang onto his seat of power during the recent “Troubles,” and man’chi has shifted drastically in some quarters, so much so that every alliance now seems suspect. In the midst of this powder keg, the last thing Tabini needs is to have his precocious nine-year-old son and heir Cajeiri disappear.

Imperious as his father and grandmother combined, and full of an adolescent ateva’s self-assurance, Cajeiri has run away to have the adventure denied him when a trip to Bren’s estate on the coast was canceled – but no one else knows that. And in the meantime, he is a prime target for anyone hoping to pressure Tabini.

Once again Bren’s got a mountain of a mess dumped in his lap. To make things even more complicated, he has been hosting his ex-girlfriend Barb and his newly divorced brother, who have somehow managed to find their way into each other’s arms. Jago, Bren’s ateva bodyguard, and lover, would like nothing better than to remove Barb – and Barb’s threat to Bren’s man’chi – permanently. But finding Cajeiri is the first priority. Humans are hardwired to protect their young, but Tabini’s government is balanced on a rocky political peace that could crumble at any moment. And no one wants to see which way man’chi would lie of Tabini were forced to chose between his son and his seat as aiji.

Cherryh never makes things easy on her protagonists, and Conspirator doesn’t change that paradigm in the least. This book – the entire series, in fact – has something for just about everyone, from well-drawn, multi-dimensional and truly interesting characters and alien psychology, to brain-twisting intrigue and blood-pumping adventure and action. Set aside some quality time to read this one, get comfortable, and don’t plan on getting any sleep until you are done.

I had no idea this series was still going. Must see if I can get back into it at some point. Like Cherryh a lot.