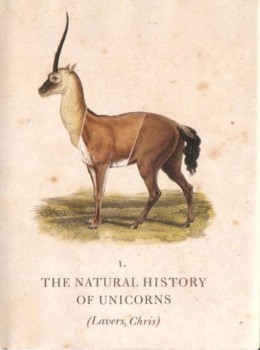 The Natural History of Unicorns (2009)
By Chris Lavers

Some book titles can grab you across a room and demand your money. Such was the case with The Natural History of Unicorns, which I discovered not in a bookstore, but in a curio shop in San Francisco specializing in . . . actually, I have no idea what the store was really selling, except that it was next to the Pirate Supply Store (no joke, this exists, although principally to fund a writing workshop in the back) and the excellent science-fiction and fantasy bookstore Borderlands. A bit of both stores rubbed off onto this one, and so in the midst of taxidermy snakes was this book promising to tell me the Natural History of a fantasy animal. Immediate sell.

Well, almost immediate. I did check to see that the book was not crazy pseudo-science making the claim that the fantasy version of the unicorn was real and scientists were refusing to admit the truth. But the book appeared to be exactly what I wanted: a multi-discipline exploration of the development and evolution of the unicorn legend.

On the surface, the unicorn is the simplest of fantastic creatures: a horse with a single horn jutting from its forehead. Of course something like that might exist! There are plenty of horned hoofed animals, a unicorn isn’t much of a stretch.

But the unicorn carries a trainload of baggage behind it: a symbol of spirituality and Christianity, emblem of British royalty, symbol of virgin purity, a creature in roleplaying games, icon of New Age thinking, and decoration on a third-grade girl’s wall. The unicorn is indeed, as legend has often claimed, tough to hunt and harder catch.

Chris Lavers, a lecturer in natural history at the University of Nottingham, writes in a friendly, humorous style that feels like an Oxford professor during the off-hours entertaining guests around the fire with brandy in ample supply. In places, Lavers seems to channel Avram Davidson and his Adventures in Unhistory, although not quite as obtusely or wittily. (Davidson’s book has a chapter on unicorns, by the by.) The book makes for fast nonfiction reading, although Lavers does go off on a dull detour from his topic in the center of the book, occasionally relies too heavily on long quotations, and fails to explore an important avenue of unicorn history that I hoped to learn more about.

Chapter I, “A One-Horned Ass,” begins at the beginning: the first physical description of a “unicorn” in a work of nonfiction. The one-horned beast appears in the writings of a fourth century BCE physician, Ctesias of Cnidus. Ctesias served the Persian Emperor (probably as a privileged captive of war) and wrote extensively about his new home as a recorded stories from India, which was a fantasy world to him. In the surviving portions of his work Indica, Ctesias collects travelers’ tales and mixed them with some of his own medical knowledge to create a bizarre picture of the subcontinent. Lavers uses this chapter to tackle both Ctesias’s description of a “one-horned wild ass” and Odell Shepherd’s 1930 analysis of it, which is the twentieth-century’s most detailed book on unicorn possibilities. Shepherd concluded that Ctesias mixed the India rhino, the Tibetan antelope (also called the chiru), and a Persian ass (also called an onager). Lavers comes to a different chimerical mix for Ctesias’s beast: the Tibetan yak, the chiru, and a small and speedy equine called the kiang. Lavers makes a strong case that Ctesias knew much more what he was talking about than other historians have credited him; the Greek was not strictly a “fabulist,” and therefore the origin of the unicorn tale comes from a biological reality, but one limited because of the lack of first-hand observation. The question Lavers poses going into the rest of the book is how much of the subsequent writing about unicorns comes from pure fantastical imagining and how much from returning to actual biology?

The text flashes forward to the Romans in Chapter II, “Where Unicorns Roam.” Both Aristotle and Pliny kept Ctesias’s one-horned ass alive, and a second century BCE author, Aelian, added more details that Lavers asserts lockdowns the chiru and a number of other animals of the Himalayan plateau as the progenitor of the unicorn. Since only a few changes appear in Aelian’s “cartazon” from Ctesias’s unicorn, Lavers believes this shows nature, not fabulism, still dominated the unicorn: “The one-horned ass might have ended up 10 m tall with a polka-dot hide and a horn made of gold; it might have come to share its landscape with dragons and satyrs. But in 600 years nothing outrageous was added to the myth.” 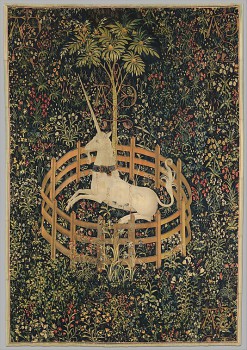 Chapter III, “The Judeo-Christian Unicorn,” address the question: “So what’s the business with the different ‘unicorn’ references in the Bible?” Before I read through Lavers’s chapter, I made the assumption of “translation error” for the unicorn showing up in the Old Testament. And that appears to be the case. The Greek translators of the Hebrew original did not know what to make of the animal called a re’em. Based on context, they made a guess, and reached for Aristotle and therefore grabbed onto Ctesias’s one-horned ass. The Greek word for “one-horn”: monoceros. The Latin word: unicornus. So we arrive at the name of the beast.

(So, what was a re’em, in truth? An answer came in the nineteenth century after the deciphering of cuneiform: an extinct ox, known in Europe as an auroch. Lavers points out that the Biblical texts make much more sense with a powerful two-horned ox instead of the fanciful unicorn.)

The unicorn is now loose in European culture via the Bible, and Chapter IV, “The Iconic Unicorn,” delves into how the scholars of the Middle Ages explored this creature with a prominent role in their sacred texts. This is where we see the familiar unicorn emerging. The Physiologus, a collection an animal allegories, created the recognizable portrait of the fantastic beast and introduced its interaction with the virgin maid. This chapter may turn off the more casual reader because it deals with the tangle of medieval theology and symbolism, and here Lavers ventures into more interpretative territory, particularly when examining the centerpiece of unicorn art, the Vertueil Tapestries. He does make an interesting apology for this:

The deconstruction of such a work, isolating and explaining its contexts and elements one by one, is a very modern way of trying to understand, but one suspects that the tapestries’ designer would be horrified to witness the systematic unraveling of his work in such a way. So let us halt the interpretation game and appreciate the Vertueil Tapestries for their mastery, their quite exquisite beauty, and for their remaining symbolic mysteries.

On to the emergence of the secular unicorn in Chapter 5, “Beneficent Unicorns.” Say hello to the narwhal; the cetacean did not create the unicorn myth (something I was told was a fact when I was a child) but it provides the “alicorn,” the much-sought horn of the beast containing alexipharmical properties. But where did the concept of the healing powers of the alicorn arise? The chapter presents something of web of connections, but eventually a single strand emerges in the Muslim medical world, attached to a create called the “khutu.”

And what is a khutu? The longest chapter in the book, “Hunting the Khutu,” tries to answer this, and takes a long, dull detour. This is the only place where Lavers gets too off-track from the creature of the book, and even he acknowledges this at the beginning of the next chapter: “Having got thoroughly lost in Asia, let us return to the West and pick up the unicorn’s story where we left it.” Yes, let’s.

Chapters 7 and 8, “A Great Way Off!” and “Darkest Africa,” present modern Europe going on the unicorn hunt. Rationalism at first dismisses the creature, but then Romanticism revives it. But the unicorn always remains elusively removed in “distant lands” (at least from the view of European searchers). The story of Harry Hamilton Johnston, a British diplomat who thought that Sir Henry Morton Stanley’s mention of a creature called the “atti” in the Congo might be a unicorn, is one of the book’s best sections. It also brings the unicorn quest to its end. Johnston led the last unicorn hunt in 1901, although he believed the atti could also be an unknown species of jungle horse. Johnston’s expedition did lead to the European discovery of the okapi, a short-necked giraffe — not far from what Johnston thought he might find, but not a unicorn, alas. 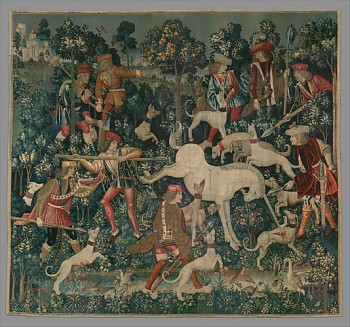 Lavers teases in the introduction that “unicorns did exist. There are photos.” Chapter 9, “The Scientist’s Unicorn,” unveils what this book-opening lure is: a genetically altered bull. After researching African tribes’ manipulation of herd animals’ horns, biologist W. Franklin Dove experiment on a bull calf in 1936. He manages to achieve a “unicorn bull,” but if PETA existed then, they would have nailed him to a wall. Lavers suggests the possibility that early tribes may have managed the same feat with their herd animals as Dove did, and thus contributed to unicorn lore.

The book closes with a chapter that leaps backwards, well past Ctesias. Although the Greek physician introduced to the western world the concept of a one-horned horse as a real animal, single-horned creatures appeared in the art and legends of more ancient civilizations. This chapter travels through Mesopotamia, early Iran, and the Indus River Valley hunting down the titular “Ancestral Unicorns,” as well as myths that might have contributed to the legend of the unicorn laying its head in a virgin’s lap. One suggestion comes from The Epic of Gilgamesh. Possibly, the melting pot of Alexandria provided all these ideas to early Christian writers, and they leaped in the Physiologus and translations of the Bible, where they mixed with Muslim medicine and the narwhal, and — presto! The utterly confused beast we now have. Of course, there is no simple solution to the unicorn, and I’m glad Lavers avoids forcing one.

Aside from the dull and mostly unnecessary trip with the khutu, Lavers one other mistake in the book is his failure to at least make a short walk down an important road of inquiry. At the beginning of the last chapter, he remarks: “We have reached 1936. Up ahead is the unicorn of New Age mystics and advertising executives. We must turn back.” What? Why? Isn’t the unicorn of the next seventy years worth examining? Those years made some of the most important contributions to unicorn legendry: not only New Age thinking, but also role-playing games, fantasy novels, and She-Ra. The unicorn as a modern phenomenon deserves much more than a two-sentence brush-off. Perhaps Lavers thought it would take up too much time and space. If so, I’d suggest chopping down the Khutu chapter, or maybe using fewer quotes.

Lavers concludes that the multitudinous sources for the unicorn account for the multifaceted modern views of it:

To which I would add: If your unicorn looks like the most beautiful white horse in the world and runs along rainbows and among smiling stars, then you have a daughter under age eleven.

By the way, my unicorn was created by Peter S. Beagle and sounds like Mia Farrow.