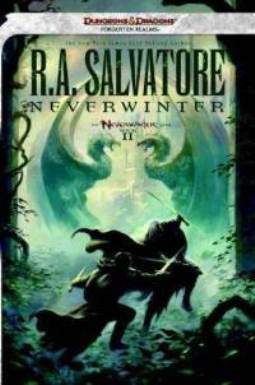 Long ago, in a time known a college I read my first R.A. Salvatore novel, The Crystal Shard. At that point a great portion of my life was wrapped up in The Forgotten Realms where the novel took place.

Little did I know as I flipped through the very fun, and incredibly D&D-like novel, that a periphery character named Drizzt D’Urdin would go on to be perhaps the most famous D&D character of all time.

So powerful were these books that they actually changed the map of the Forgotten Realms campaign world. My copy, a 1st print, has a map in which Drizzt’s exiled home, Icewind Dale, doesn’t even appear, Salvatore choosing a place beyond the current mythos of the realm.

I finished the Icewind Dale Trilogy and was greatly pleased with all things inside those pages. It was a true D&D adventure and had the makings of something so much larger. I was also taken with the fact that the trilogy was the only one I’ve ever seen in print to feature Larry Elmore, Clyde Caldwell, and Jeff Easley as cover artists in a series.

Still, as my college days waned, so did my love affair with The Forgotten Realms and I drifted back to more mundane fantasy. Years passed and Salvatore continued to write about Drizzt, the Drow’s legend growing until it was something so far beyond what I knew him to be I couldn’t imagine going back.

Eventually all his volumes were recovered by the extraordinary talents of artist Todd Lockwood and I thought on more than one occasion of once again giving the series a try because the unification of the style gave solidity to the series.

In a bit of serendipity, I got to see a beautiful copy of Lockwood’s Neverwinter cover art while at the San Diego Comic Convention and when the book actually appeared I knew it was time to delve back into the legend of Drizzt.

So came my time with Neverwinter, the 2nd novel in the, yes you guessed it, Neverwinter Saga [The 1st being Gauntlgrym]. I have to say I was pleasantly surprised with the read. Salvatore’s skill as a story-telling has grown with great leaps and bounds in the past twenty years [gads, can it really be that long?].

I’m also happy to report to any of those that may find themselves intimidated by diving into a series so late in its creation, the book actually stands well in its own right as a fine adventure fantasy.

Although certainly missing some insider information, I didn’t ever feel lost or overwhelmed, the ride creating a simple pleasure with each turned page. As a gamer, it was fun to return to my roots, the various aspects of the game I so dearly love are also played out here which brought about a true bit of nostalgia. In some ways it’s nice to know that not everything has to be rethought and that the common elements of adventure fantasy can still retain orcs, elves, magic-users, and the like.

To all those looking for a fun and fast read, I highly recommend Neverwinter. May your days with the most famous of the dark elves be as thrilling as ever!

I’ll just say that i’m a Salvatore fanboy..no other way to put it. I love everything the man touches.

I’ve read most of his work. And while i didn’t start with the drizzt series it is very good. I’ve read all the books in the series and with Gauntlgrym and especially Neverwinter you see Salvatore really revitalizing the series with new and exciting characters that have more grey area than any of his prior heroes.

Although i’m surprised to hear you started reading it with book two and that you actually liked it! There was losts of nostalgia in this book for long time fans of the series. I can’t wait for the next book.

I’m also a huge fan of Salvatore. The first fantasy novel I ever read was Homeland, the first book in the Dark Elf Trilogy. I’ve read everything since. I too have the Lockwood covers. I also have the Encyclopedia which features art from throughout the various printings.

I stopped reading Forgotten Realms when Salvatore went on hiatus and so many of the original writers, like Elaine Cunningham, left. They’re getting some new writers now, like Richard Lee Byers and Paul S. Kemp, that have been drawing me back in recent years.

I didnt start reading the Drizzt books 20+ years ago, I started a few months back…for some reason by the time the Forgotten Realms novels started to come out I had more or less stopped reading TSR published novels (probably one too many bad dragonlance novels – dont get me wrong I love the first handful of the dragonlance books, but they fall off very quickly once other writers step into the world). It could also be that around that time I stopped playing DnD and had drifted into ICE’s Rolemaster since that is what the gaming group I hooked up in college was using.

But anyway, I started the Drizzt books fairly recently, after a friend gave me the first omnibus.

“The Crystal Shard” was pretty good and I thought I was going to be on a the Salvatore kick for the long haul. I even bought the second omnibus while I was in the middle of reading it.

After six “books” (two omnibuses), they really seem to be hit or miss. There seems to be a bit much of the dues ex machina and a very heavy reliance on the mechanics of DnD in them (to put it in a way I read/heard somewhere along the way, “It is like I can almost hear the dice rolling in the background”).

But even with those problems, they are quick and decently fun reads.

[…] in 18 best selling Forgotten Realms novels by R.A. Salvatore — including the latest, Neverwinter, released just last month – The Legend of Drizzt is the third installment in the D&D […]