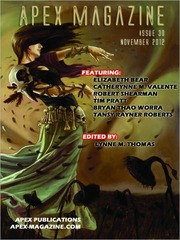 The latest Apex Magazine is now available; the thirtieth issue is the first by new editor Lynne M. Thomas.  The issue features former editor Catherinne M. Valente’s “The Bread We Eat in Dreams” (who also contributes a farewell essay and a poem) and “The Leavings of the Wolf” by Elizabeth Bear.  This month’s revisited classic story is “The Creeping Thing” by Robert Shearman.  There’s also poetry by Tim Pratt and Bryan Thao Worra and non-fiction by Tansy Rayner Roberts, as well as several interviews.  For those who might fear change, rest assured that the new editor intends to carry on the Apex tradition:

Apex will continue to shove at the edges of the genre until they bleed. I will be publishing transgressive, visceral stories and poems that show us the best and worst of who we are, rendered with style and precision. Expect work outside of your comfort zone: thoughtful, experimental, emotional, and brave. Here you will find stories and poems that show us a heart, sliced out carefully, still beating in the writer’s hands, for all the world to see.

Also, in the one door closes, another opens category, outgoing Werid Tales editor Ann VanderMeer and spouse Jeff (who you may also have heard of) have launched on-line Weird Fiction Review. There’s a combination of fiction, non-fiction, comics, interviews and other, well, weird stuff.  As the editors describe it: 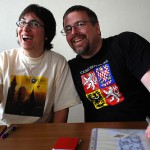 This site is meant to be an ongo­ing explo­ration into all facets of the weird, in all of its many forms — a kind of non-denominational approach that appre­ci­ates Love­craftbut also Kafka, Angela Carter and Clark Ash­ton Smith, Shirley Jack­son and Fritz Leiber — along with the next gen­er­a­tion of weird writ­ers and inter­national weird. The emphasis will be on non­fic­tion on writ­ers and par­tic­u­lar books, but we will also run fea­tures on weird art, music, and film, as well as occasional fiction.