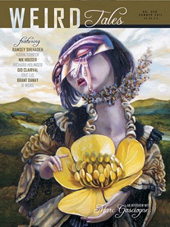 As usual, I’m behind the curve. I was delighted when I first heard that Ann VanderMeer was taking over Weird Tales but never got around to reading an issue under her direction because, well, I just never got around to it.  Alas, now she’s been relegated to the slush pile as a new owner wants to return the magazine back to its pulp Lovecraftan roots (although, the latest news is that the transition is being handled with a little more class than originally reported and it seems a final VanderMeer edited adieu issue is forthcoming).

I’m undoubtedly in the minority here amongst the crew of the good ship Black Gate in not being overly fond of Lovecraft, Howard and all the other pulp writers and am much more inclined to the “New Weird” sort of fiction that VanderMeer has championed.  Just take a look at the cover of the latest issue.  Nothing pulpish here. To my sensibilities, that’s a good thing.

Or, I guess I now have to say, was a good thing.

In any event, since nothing makes you more eager to catch up on your to-do-list than finding out some of the items are about to disappear, herewith my review of the fiction in the next-to-last VanderMeer edited Weird Tales.

All of these stories have Lovecraftian elements, assuming by that we mean an incomprehensible and malevolent universe that occassionally manifests itself to disturb the illusion of “normal” civilized reality. However, they also tend to skew towards contemporary literary themes such as feminism and the psychology of nursery rhymes. Can’t fault Lovecraft for not being alive for that, though why the new owners would want to herald a return to a more purely Lovecraftian milieu, some highly tainted by racist assumptions  rooted in the 1930s zeitgeist escapes me.

Some of these stories are also funny; Lovecraft never struck me as a guy I’d like to hang out with for a few laughs.

Case in point is “The Diner on the Edge of Hell” by Ramsey Shehadeh. Two rogue angels are at a diner, evidently located in a netherworld not quite in Hell but below the boundaries of Heaven, discussing how they are going to return a woman named Helen, who maybe is Helen of Troy, to purgatory,  who herself is  guilty of taking children out of purgatory.  The opening conversation concerns whether Helen is “hot”; like I said, it’s funny. In fact, I wasn’t able to discern any point beyond having fun with the whole idea of battling angels in some bizarre afterlife, though that is fine by me.

Another hellish take is “A Contract Without Loopholes” by Erik Lis. As you’ve already figured out from the title, yes this is another Faustian bargain riff, but with a modern twist you probably won’t anticipate.  It’s a funny reminder on how we all sell our souls on a regular basis without thinking twice about it.  And if Lovecraft had a sense of humor, he’d have written something like “Look at the Jam I’m In” by Richard Holinger.

In contrast, “Jagannath” by Karin Tidbeck isn’t funny; rather it seems to be trying to make some kind of feminist statement.  Children born in the innards of some kind of cyborg creature are exploited to keep the inner workings functioning.  Girls are inherently stronger and get assigned to work in the “engine rooms,” while the males do the intellectual work of driving the machine and fertilizing eggs to keep the internal slave workforce going.  There’s a malfunction that leads to a complete system breakdown, though, and Rak, the female protagonist, is thrust into assuming the male roles and eventually escapes her host altogether.  Okay, I get it, but it all seemed a little heavy handed for my tastes.

What is a little more to my taste is Nik Houser’s “A Beginner’s Guide to Sandcastle Alchemy.” While not funny in the laugh out loud sense, there’s some sly commentary on young adolescent male relationships, a subversion of the beautiful mermaid myth with hints of Melville and Bradbury thrown in, and a coming of age story all wrapped into one.

Die-hard Lovecraftians will rejoice with “The Hand,” a truly creepy tale by Gio Clairvil that touches on sexual predation and dysfunctional yearning for love that is highly disturbing.  Only two pages long, the last line packs a wallop that is sure to stay with you.  Literally creepy is “Belllzebub’s Messiah,” which combines crucifixion mythology with entomology to give new and somewhat disgusting meaning to Lord of the Flies.

I don’t know if this has been typical for the VanderMeer edited Weird Tales, but this all struck me as something that any Lovecraft fan could appreciate, so why the need for change?  Stay tuned for further developments.

This issue was a real disappointment for me. “A Contract Without Loopholes” seemed more like a narrative gimmick than an actual story, and “Jagannath” was like a gross, feminist propaganda story. “Sandcastle Alchemy” was a bit disturbing.
Hope the next issue is more entertaining.

But you gotta admit it was a pretty cool gimmick.

And here I am, sitting on the fence.

I’m not terribly hungry for Lovecraft pastiche, unless it’s the caliber of T.E.D. Klein’s Black Man With a Horn or Michael Shea’s Fat Face. But what I’ve read of the New Weird doesn’t fill me with a craving for more, either.

What I’m missing in much modern macabre fiction is not the musty tomes, creeping tentacles and Elder Things of the most overt Lovecraft pastiche, but the sense of encountering something strange and disturbing because it is not of the world we know, something that chills and fascinates because it actually feels supernatural. This distinctive breed of Spectral Horror has never been common, but it’s gotten harder to find than ever. Backward looking Lovecraft pastiche can be fun, but it rarely offers this kind of thrill, indeed it’s often predictable enough to be perversely comforting.

And, in my experience, much of the New Weird offers fewer macabre thrills than shaggy dog story twists on familiar themes, mash-ups, revisionism for its own sake, and parables that seem to have been written primarily to allow the author an opportunity to drive home a moral point.

So for this Halloween I’ve been delving deeper than ever into classic English ghost stories. Beyond the work of the familiar titans of the genre there are a great many lesser known tales, often written to a remarkably high standard, and the best deliver an electrically powerful eerie thrill. So I guess I am backward looking, but it’s good to know that there are still some fine supernatural stories left out there to encounter for the first time.

[…] in the one door closes, another opens category, outgoing Werid Tales editor Ann VanderMeer and spouse Jeff (who you may also have heard of) have launched on-line Weird Fiction Review. […]