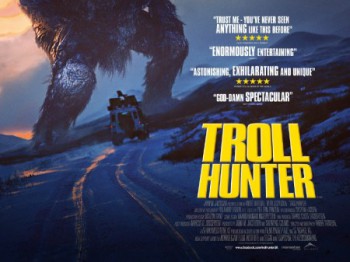 I love any review that gives me an excuse to use “ø.” Next I will have to find an Icelandic movie so I can write a review using “þ” and “ð.”

In the recent glut of “found footage” films that followed the successes of Cloverfield and Paranormal Activity, the Norwegian film TrollHunter (Trolljegeren) is a true gleaming piece of uncovered dwarf’s gold. It ditches the gloom that hangs over the other movies in this subgenre and lets the audience have a good time along with its light scares. And while most found footage films are horror movies, this one is a fantasy. A fantasy with dark thrills, but nonetheless a fantasy.

TrollHunter first screened in the U.S. at Fantastic Fest 2010, where Magnet Distribution picked it up for release in Summer 2011. (Magnet has picked up some terrific small films and done simultaneous VOD and limited theatrical release patterns for them, including Hobo with a Shotgun and Centurion. Anything that Magnet picks up catches my interest now.) The film is currently available on DVD, Blu-ray, and Netflix streaming, and anyone who gets a high from fairy-tale fantasy or Norse myth should give this film a look despite the overused faux-documentary trappings.

TrollHunter obeys the framing rules of the found footage genre and begins with title cards explaining that what follows is video from a set of tapes that were sent anonymously to a TV station. The station edited the footage into a shorter movie, which experts have determined is authentic and not a hoax.

The footage is the work of three college students (Tosterud, Mørck, and Larsen) who started shooting a documentary about a local series of bear killings. Their documentary takes an unusual turn when the students discover a secretive man named Hans (Jespersen) whom the hunters working for the Wildlife Service suspect is poaching bears. After pursuing Hans for an interview, without success, the filmmakers push after him into a forest at night. Then a twenty-foot tall, three-headed troll crashes through the trees and. . . . 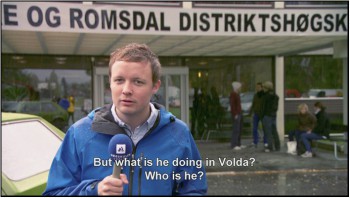 It turns out that Hans is a legally sanctioned hunter for the Norwegian government. But he doesn’t answer to the Wildlife Service. His boss is the Troll Security Service (TSS), a body responsible for controlling rogue troll activity and hiding the monsters’ existence from the general population. Hans decides to let the students come with him on his current assignment because he has finally gotten fed up with the lonely hassles of troll hunting and wants someone to document the work he does so the public will know about it.

But this winter Hans has a tougher job ahead of him than he has ever had to face: an unusual number of trolls have started to push into populated lands, and Hans not only has to stop them, but also find out what has made the monsters so agitated. The answer is unexpected and startling for how mundane and deadly it is.

The performances from the leads are decent-to-good, but the trolls are the real stars, and boy do they deliver. The first time one of the title monsters lumbered out from the forest, towering almost the height of the pines and sporting two extra heads, I thought the film might be headed for trouble. I had expected a realistic take on the monsters as animals, but this first troll looked like something Brain Froud painted or a picture from Wil Huygen’s The Secret Life of Gnomes. Everything about it felt like a fairy-tale creation, which ran against the grain of the naturalistic style the movie had already established.

Minutes later, I realized this was exactly the effect that the filmmakers wanted. The weird fantasy troll made the situation even stranger; folklore and magic suddenly invaded a realistic documentary. After this, TrollHunter moves into the crazy/funny zone. It’s when the monsters appear, the main menace of the film, that everything turns lighthearted. The film never lets their danger disappear, but balances it with a sense of wonder and exploration. 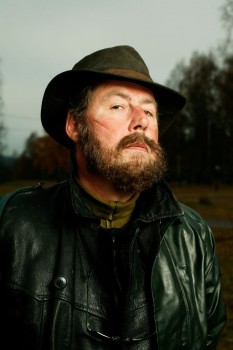 The trolls come in a variety of sizes and forms, all of them beautifully designed. The basics of troll activity that Hans lays out for the students mixes myth with some dashes of science. These trolls turn to stone in the sunlight, but Hans has special UV floods to petrify them during the night. They behave bestially and cannot speak. They can smell the blood of a Christian, so only non-Christians can go on troll hunts. The movie puts this interesting aspect to great dramatic use later. It also leads to the funniest line, which Hans says while setting up a lure on a bridge: “Better stand back. I’m going to spill the blood of a Christian man.” (Where did he get a bucket of that? Do I really want to know?)

Jespersen gives the best performance in the film as Hans. Jespersen is known in his native country as a comedian with a hard satirical edge. There are flashes of humor to his portrayal of the title character, such as the way he has Hans lumber about in absurd anti-troll armor that makes him look like he just missed the auditions for Monty Python and the Holy Grail. For the most part, Jespersen plays Hans as capable but worn down. It’s a joy watching him execute strange troll-hunting tactics and improvise coolly in the middle of nightmare situations, but you also wonder when he might just give up on this business and let the trolls munch on the ungrateful people he’s been protecting.

A few other popular Norwegian comedians appear in the cast. The most notable is Hans Morten Hansen, who plays Finn, the irritable bureaucrat responsible for overseeing this messy troll business. Director André Øvredal must have wanted to cue audiences to take a light approach to this material with this type of cast.

Most found footage movies look ugly by their nature. TrollHunter, however, is visually stunning — and not just because of the tolls. The students’ camera (supervised by photographer Hallvard Bræin) captures great icy mountain vistas of Western Norway. The chase finale across a rocky plain in the trollss territory opens up the movie into something epic that this type of “shaky cam” filmmaking rarely achieves.

TrollHunter obliquely hints at a fascinating mythology lying beyond the borders of modern Norway. If trolls exist and appear similar to their fairy-tale and Viking roots, than what else from the mists of Norwegian lore might also hide in the wilderness? That the trolls have an intense hatred for Christians (or is it simply that they can smell Christian blood and don’t like it?) suggests that the Norse pantheon of gods might be real and possibly exist parallel with the Christian god. That opens some crazy ideas worth exploring. What other weirdness is the Norwegian government covering up? And what other nations might have similar programs keeping in check the fantastic monsters of their ancient cultures? TrollHunter offers a tantalizing point to graft on new stories. I don’t want to see a movie sequel, but tie-in comics or novels would definitely get my money. (I’d pay in Norwegian krone, or maybe trade some oxen and one goat.) 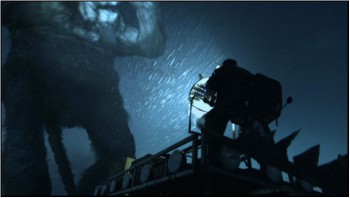 The movie unfortunately trips in the same place that many found footage films do: it doesn’t know how to end satisfactorily while maintaining the documentary conceit. It attempts to go for something dark and nihilistic after the fantasy tone — and it doesn’t fully work. But the end isn’t horrifying enough to skew the enjoyment of the film, and there’s a priceless stinger with the Norwegian Prime Minister before the credits. But I did leave the film wondering if it might have worked even more done in a more traditional narrative style. Alas, the budget probably couldn’t handle it.

TrollHunter may be headed for a U.S.-remake. The day the film opened in the U.S., Chris Columbus’s company 1492 and CJ Entertainment Media purchased the rights for the re-make, and I’m afraid they are going to go ahead and do it. A U.S. remake is preposterous. The trolls are too ingrained in Scandinavian myth and culture to make sense in North America. Another folklore creature would need to be used instead, which negates the purpose of re-making TrollHunter at all. They could set the movie in Norway with an American crew looking for trolls, but . . . oh, screw it, they’re going to do the re-make no matter how many reasons I point out for them not to do it.

This all makes me wonder if the government of Greece has a special Chimera squad, a branch of the Hydra and Nemean Lion Regulation Service.

Animal lovers, take note: the end title crawl assures viewers that “No trolls were harmed during the making of this movie.” Killed a few dwarf stuntmen, however.

Troll Hunter was awesome and Netflix was the perfect fix for what would have been an otherwise dull evening.

Ryan,
I hear you’re thinking about not going to WFC. Shoot me an email if you want a ride down for just a day. I’m driving down and back on Thursday and wouldn’t mind the company.