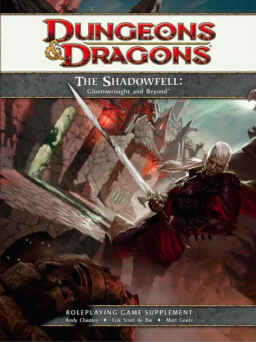 Regardless of where your gaming loyalties lie these days — 3rd Edition, 4th Edition, Original Edition, Pathfinder, or Other — you have to admit that Wizards of the Coast has produced a top-notch line of adventure supplements to support D&D over the past few years.

They’ve put some of the best writers in the business — including Ari Marmell, Bruce R. Cordell, Mike Mearls, Bill Slavicsek, Richard Baker, and many others — to work crafting attractive and superbly produced game books that keep me opening my wallet month after month.

Yet, as an old-school gamer who cut his teeth on the golden age of role-playing adventures, one thing I still miss is those beautiful box sets TSR produced in the 80s and 90s.

You know the ones I’m talking about. The Ruins of Undermountain, Dragon Mountain, Menzoberranzan, City by the Silt Sea, and dozens of others.

When you held one in the game store, you felt the promise of weeks of adventure vibrating in your hands. Or maybe it was just the crushing weight of the box, making your wrists weak. Whatever.  Your hands trembled, and you knew that had to be good.

But the economics of the gaming industry changed a lot in the last two decades, and the boxed adventure has all but vanished. 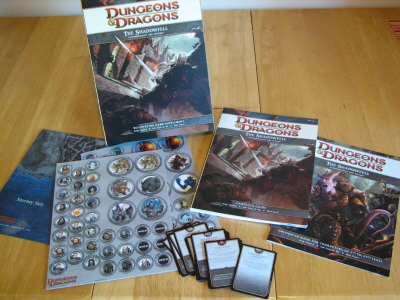 They’re too expensive to produce, industry insiders tell me, and today’s savvy gamer wants to be able to flip through a book with a critical eye before plunking down their money. The era of the boxed adventure is over.

So I was pretty darn excited to receive a copy of The Shadowfell: Gloomwrought and Beyond, a gorgeous new Dungeons & Dragons boxed adventure, in the mail from Wizards of the Coast this summer.

Shadowfell is a sequel (of sorts) to the very first 4E adventure, Keep on the Shadowfell, by Bruce Cordell and Mike Mearls, published way back in May of 2008 — before the 4E books were officially released, which meant it had to include pre-generated characters and a condensed version of the new rules. 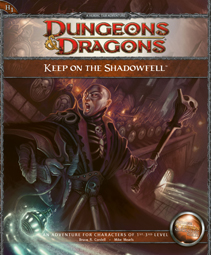 Keep on the Shadowfell is now out of print and about as collectible as a 3-year old module can get (although Wizards of the Coast released an updated PDF version free of charge through their D&D Test Drive program in 2009, bless ’em).

It introduced the Shadowfell, a dark plane filled with sinister surprises watched over by a ruined keep, and The Shadowfell: Gloomwrought and Beyond builds a complete campaign around it.

This is from the box copy:

Prepare to enter the Shadowfell, a disturbing reflection of the natural world and a dark haven for lost souls and deathly spirits. Foul creatures haunt this forsaken place, yet out of the gloom rises a city of twisted splendor where adventure awaits and anything can happen.

This Dungeons & Dragons game product contains all of the information a Dungeon Master needs to run thrilling adventures set in Gloomwrought, a city in the bleak and deathly plane known as the Shadowfell.

I have high hopes that this will usher in the return of the boxed adventure. But even it it doesn’t, I’m very glad to have this one. My advice: grab it before it too becomes a collector’s item.

The Shadowfell: Gloomwrought and Beyond was written by Andy Clautice, Erik Scott De Bie and Matt Goetz. It retails for just $39.99, and was officially released in May, 2011. You can read more at Wizards’ site here.

I loved the old boxed sets. I remember buying the Waterdeep setting (which was huge) with a friend and spending the afternoon looking through the maps and other errata he’d gotten. The only boxes I yet retain are The Ruins of Zentil Keep, and the generic Forgotten Realms box. Ah for the days when Men were Men, and you had to go to the hobby shop for D&D stuff.

Yep, I’m feeling like a true geek module collector! And City by the Silt Sea… a Darksun box thrown in, very crafty!

> The only boxes I yet retain are The Ruins of Zentil Keep, and the generic Forgotten Realms box.

Good ones to hang on to… THE RUINS OF ZHENTIL KEEP in particular is an underrated kit. A nice dungeon crawl, filled with lots of great encounters.

> And City by the Silt Sea… a Darksun box thrown in, very crafty!

It was probably my favorite of the DARK SUN box sets, although I never got to see how it played. Very ambitious in its design – and man! That cover art!

[…] much too believe this could start a new trend? In May of last year Wizards of the Coast released The Shadowfell, the first D&D boxed adventure in more than a decade; since then they’ve followed up with […]