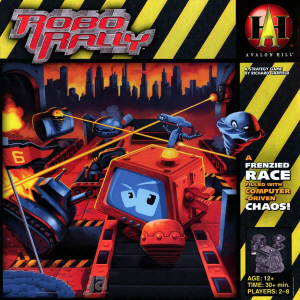 These are good times for board gamers.

After the death of Avalon Hill as an independent game publisher (its remnants were purchased by Hasbro in 1998), it sure seemed like the era of the board game was over.  SPI, FASA, Task Force Games, GDW, Yaquinto, West End Games, Fantasy Games Unlimited, Mayfair Games, TSR, and finally Avalon Hill… the leading lights of board game design in the 20th Century had all perished by the end of the 90s. It looked like those of us who loved to move cardboard counters around abstract hex grids were relegated to paying ridiculous prices for out-of-print copies on eBay.

But that was before Fantasy Flight proved there was still life in board games yet, with a stellar line up of beautifully produced — and profitable — titles. Mayfair Games returned from the dead, phoenix-like, with the English language rights to the blockbuster Settlers of Catan. Wizards of the Coast purchased TSR and built on their rich tradition with D&D-inspired board games like The Conquest of Nerath (read Scott Taylor’s terrific review here). And, surprise of surprises, Hasbro has kept the Avalon Hill name alive, putting out high quality games like Battle Cry and Axis and Allies.

So on a Sunday night when I’ve managed to pull Tim and Drew, my two teenage sons, away from Gears of War 3 and sit them down at the gaming table, I find I actually have a choice of intriguing modern games to offer them. Should we go for complex and fascinating, like Axis and Allies? Colorful and fun, like Descent: Journeys in the Dark? Quick and light, like Cheapass Games’ Kill Doctor Lucky?

Rhetorical question, of course. When one of the choices involves lasers, killer robots, and blowing each other up in a frenetic race for mechanized glory, the answer is pretty much a foregone conclusion. It was RoboRally in a landslide. 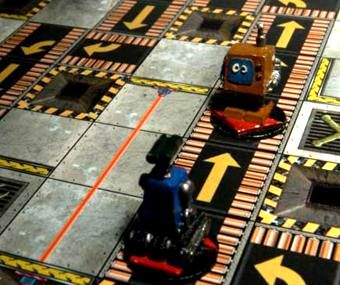 RoboRally was designed by Richard Garfield, creator of the Magic: The Gathering card game.

As far as I’m concerned Magic is all right, as cultural phenomenons go, but RoboRally is the reason future generations will be erecting statues of Garfield on the Magnificent Mile. Believe it.

The concept behind RoboRally is simple. You’re a supercomputer in a futuristic mechanized factory. You’re bored. To alleviate the tedium, you challenge other computers to race durable robots around the factory in a series of increasingly complex courses.

Nothing too difficult about the objective: just tag each of the flags in the right order, and be the first to reach the final one to be proclaimed the winner.

No, all the challenge comes in the nature of your idiotic robots, and the numerous ways they can stumble stoically — nay, joyously — towards their own destruction on the factory floor.

The robots, you see, have to be programmed remotely. And they can only store up to five instructions at a time. Once they’ve received their instructions, they must carry them out in the exact order they’ve been given.

Even if those instructions send them — say, just for illustration purposes — straight into a twin set of industrial lasers, and then immediately into a yawning pit. [This is why it’s so important not to confuse left and right turns, Tim.] 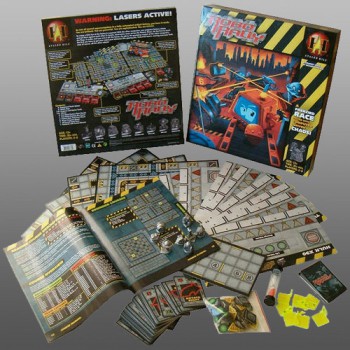 I shouldn’t gloat. In our very first game, on a simplified course meant to illustrate the basics, I managed to quickly take the lead only to misjudge where my opponents would land, and I stepped into a barrage of enemy laser fire.

My brave, loyal, incurably stupid pathfinder robot was swiftly crippled, so badly damaged that it was unable to accept a full set of new commands.

I had to try and control it with only four instruction cards, since the fifth instruction was jammed at “Two steps forward.”  Every sequence I gave it had to end in “Two Steps Forward.”

Through clever play, it’s possible to win the game with a robot whose instruction set is jammed in this manner.

Unfortunately, once my son Tim nudged me onto the wrong conveyor belt, I discovered it’s also possible to ride a conveyor to total annihilation. Much to the hysterical delight of my two adversaries.

I got a second robot into the game immediately — but not quickly enough to stop Drew from seizing the lead, and ultimately winning the game through a mixture of clever maneuvers and beginner’s luck.

The second game went much the same, as each of us watched carefully, beautifully plotted plans result in madness and robot death.

A typical round of RoboRally goes something like this:

And on and on. Two steps genius, one step oops, two steps of maddening chaos. And five steps of pure adrenaline.

But just to give you alternate viewpoints, I’ve asked my sons to share their thoughts. Here’s Drew’s unique 14-year-old viewpoint:

Awesome. Fun. I won the first game! Definitely want to play it again. Now, back to Gears of War 3.

And Tim, my sixteen year old:

If you want everything to go exactly as planned, and if you’re incredibly neurotic and a perfectionist, don’t play this game. Something, somewhere, will go wrong with your plan. If you’re lucky, “something wrong with your plan” means your opponent gets in your way and you push them into a pit of doom or a triple-laser Gatling gun. If you’re unlucky, it means you get pushed into a pit of doom or a triple-laser Gatling gun… and hope and pray that your robot gets destroyed before he has to repeat everything you told him over and over. And over. After having legions of your robots destroyed, and plan after plan fail because someone shoved you on a conveyor belt, eventually you just give up hope of ever reaching the flag, and just try to take out the other players as fast as you can before biting it.

Yeah, it was fun.

RoboRally is for two to eight players, and takes from twenty minutes to two hours to play, depending on skill level and the course you select.  The box comes with eight plastic robots, four two-sided factory floor boards, eight robot program sheets, 110 cards, and a bunch of cool extra stuff. It is manufactured by Avalon Hill/Hasbro, and retails for $49.99.

Hey, Robo-Rally! Looks like a fun game, but too complicated to corral several friends into playing with you.

Yeah, the board probably looks a little intimidating — there’s a lot going on, what with all the gears and conveyors and lasers and pits and repair stations and stuff.

But the game is ridiculously easy to pick up. I don’t think it’s that much more complicated than RISK, say.

Really, I think you just need to corral ONE friend into playing with you. All the laughter and shouting will quickly draw your other friends into the room.

I agree, Roborally is the better of Garfield’s creations.

As for it being complicated…it aint monopoly.

The rules are fairly simple once you sit down with it. The difficulty is more in the board selection, and flag placement. Some of the boards are easier than others, and you dont have to use the hard ones for beginners.

I disagree a bit with the time frame provided…I’d say it was 20 minutes to near infinity…depending on how sadistic/masochistic you wanted to be. 😉

While I’ve never had a game last more than two hours, I suspect you’ve right — somewhere out there, on a set of four Expert level boards, there’s a game of RoboRally that’s been running since June of 1996.

Best opening move I’ve witnessed: We started in a corner, one player mistook right for left on his first move, and his second moved launched his robot at high speed into the sweet by-and-by. This was closely followed by tears and gasping for breath.

The game can suffer from the runaway-leader problem. I usual counter that by setting up boards with a lot of back-and-forth to maximize chaos.

One of the online gaming sites has RoboRally, which you can (or at least could) play for free if you’re willing to play without other humans.

> one player mistook right for left on his first move, and his second moved launched his robot at high speed into the sweet by-and-by.

What’s great about that story is just how plausible it is. People who don’t understand how modern software can have so many bugs should try playing RoboRally for a few hours.

This game is AMAZING. So amazing that we were given it as a wedding present.

My husband played a 5 hour game of this at his bachelor party. They used the old version, which had radioactive good. Every turn you spent in it, you lost a point of health, but you gained an option card. His never-played-it-before brother ended up winning.

Make sure you know your left vs. right. Those that are extremely spatially challenged should not play this game. Or at least expect to not win it.

Something interesting we’ve tried is putting the flags on conveyor belts so they keep moving. When they run off the board/into a pit, they just start back at the beginning of the conveyor belt.

The best story: Playing at my in-laws; my husband and 2 of his brothers, plus his nephew. One of the brothers has to go out to pick someone up (a short 5 minute trip) and tells my husband to program his robot. The brother returns just in time to see his robot reach a flag and then kill TWO opponent robots all in the same round.

Now I want to play it!

…I meant to say radioactive GOO.

I had the Radioactive (gooey) expansion, a gift from my son. (Since his goal when playing was to collect as many options as possible, there may have been more than generosity at work there.) I eBayed that and another expansion a year ago. As with most expanded board games, I prefer the original all by its lonesome.

And putting flags on conveyor belts — THAT’S a great idea.

I hear the original (non-Avalon Hill) versions of RoboRally are genuine collector’s items these days. I assume that’s what you had?

Yes, which explains why the two expansions I sold went for so much, despite the box inserts for one having collapsed, causing the boards to warp over the years. Not giving up the original game, though.

(Now I remember: Armed & Dangerous was the other expansion I had. It gave you the means to kill and die quicker.)

[…] also playing the occasional round of RoboRally and of course Barbarian Prince, but to round out his education I need to include an assortment of […]

[…] in the last few years, releasing terrific titles that have rejuvenated the entire genre, like RoboRally, Small World, Ikusa and the epic Conquest of […]

[…] of bags left over to sort out the various tokens. I then still had plenty of baggies to sort out my RoboRally pieces and a few other games that needed […]