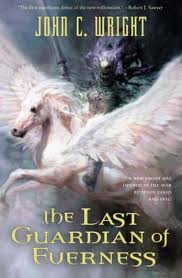 The Everness of the title is simply a house, a sprawling mansion built on the northern Maine coast.  Everness is a memory palace made real, a house whose features and layout are identical in both the waking and dream worlds, and one of the few gateways where dreams can cross over into manifest reality.  It is a conduit for all the normal dreams that come to humans in their sleep, but it is also a border to be defended.  The run-down seawall of the manifest world is a towering battlement in the Dreaming.

John C. Wright’s Chronicles of  Everness is an epic in two moderately sized volumes dealing with an assault upon our world (the waking world) and a horde of unspeakable evils from our nightmares.  Literally.  The world of the fantastic exists, but only in a vast dream-world composed of a vast population of gods, demons, monsters, fairies, selkies, angels, and supernatural princes.

It’s a difficult pair of books to encapsulate in any reasonable number of words, simply because of the sheer number of ideas, fantastic settings, plot threads, and scenarios Wright manages to stuff between his covers.  On the most basic level, they’re a tale of good versus evil, but that battle is fought in locations ranging from a suburban living room to the towers of an undersea Hell.  The books bite off a lot, and manage to chew through most of it with style.

The guardians of Everness are the Waylock family, who for fifteen hundred years have stood watch on the dream-washed battlements, training themselves to use elaborate memory structures to recall dreams while they wake, training in archaic weapons to fight nightmarish monsters with silver lance and sword, and memorizing the names and conjurations that give them mastery over the magic ofsleep. 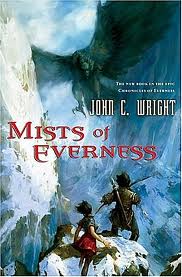 The characters are numerous and colorful.  There are the modern-day guardians-Lemeul Waylock and his grandson Galen, who mastered mnemonics, wizardry, and spear-fighting instead of computer science or English literature-along with Raven Ravenson, who is half-Titan and half expatriate Russian behemoth, and his wife, Wendy, who met Raven while capering nude in a national park, who may or may not be half-fairy and whose parents may or may not exist outside dreams.  There’s Peter Waylock, a veteran who lost the use of his legs in Vietnam, who has forgotten his family’s ancient mission in the twilight lands of the Dreaming.

Ranged against them are villains ranging from corrupt politicians and a Satanic cult to selkies, plague knights astride rotting steeds, the obese, blind torturers who live on the dark side of the Dreaming moon, dragons, kraken, fallen seraphim, necromancers, frost giants, the three princes of storms, and Lucifer himself.

Wright’s Selkie, in particular, are enormous fun to read about.  They talk like pirates and are habitually incapable of telling the truth, and given that they can swap bodies as easily as humans change clothes, identity is a deceptive concept among them.  Everything aboard their black ships is in terrible dis-repair. . .except the flaying racks, which are kept spotless when not in use.  Flay a senator and throw his skin into the sea, and you’ll have a selkie in congress the next day (with no one the wiser, amirite?).

Wright’s approach to magic is more mystical than mechanistic (dig that alliteration).   Much of it revolves around knowing the names of powers that rule over some particular area, and calling on those names to achieve some effect.  The Waylocks tend to conjure by, for example, the four deities of sleep, or the four rivers that flow from Paradise, or the three names of death.  Magical battles are less about fireballs flying and more about trying to achieve some kind of compulsive force over your opponent through the invocation of mystical authorities, bonds, and obligations.  It has much more in common with the feel of ancient sagas than the “magic systems” of contemporary fantasy, and Wright succeeds in making these kinds of mystical duels engrossing, even if the substance of them is more like a hard-fought court case than a shoot-out.

Where Wright really shines is the raw poetry of his writing (I’ve found this to be true of all his books), and the dream-world is a perfect canvas for his talents.  For illustration, here’s a paragraph taken from Raven’s voyage to the dark side of the moon:

The Moon began to come over the brink of the world, enormous; mountains, valleys, and oceans, gray-black in the sunlight.  Only half the lunar globe came over the rim; and the whole pock-marked, silent, blasted lunar landscape filled a third of the sky.  The lunar ocean directly ahead seemed to be mingling its waters with the waves on the horizon.   Streams of pale water and black water began to mingle in the waves below, amid the gloating corpses of schools of poisoned fish.

Blue sky faded into black, and a harsh and terrible hot Sun glared down amidst the nocturnal sky, and bright, unwinking stars gleamed down onto a lifeless, sunlit sea.

I should also add that Wright manages to make his novel uniquely focused on America (as a nation ultimately founded on dreams-the dreams of justice, liberty, and freedom from tyranny), which I appreciate in a genre that tends more towards Anglophilia.  There’s even a couple sequences in which humble American money becomes a key element in some of the Waylock’s most potent conjurations.  And, yes, Wright has an awesome explanation for that eye-capped pyramid on the one dollar bill.

If I have one complaint about Everness, it’s that the logic of the plot is occasionally obscured by the sheer flood of imagery, action, and exotic entities.  These books edge decisively on the side of attempting too much rather than too little, and some sections can be confusing, especially if you don’t read both books straight through.

That said, I recommend both books highly.  If nothing else, you’ll have the pleasure of having finally read a novel in which the towers of hellish Acheron wage a pitched battle with an American carrier fleet on the Pacific Ocean, while Prometheus advises mortals on how to build a better bomb even as Lucifer mounts his war-chariot.

If nothing else, you’ll have the pleasure of having finally read a novel in which the towers of hellish Acheron wage a pitched battle with an American carrier fleet on the Pacific Ocean…

How did you know that was exactly the book I’ve been waiting for?

Because I know everything. Want some winning Lotto numbers?