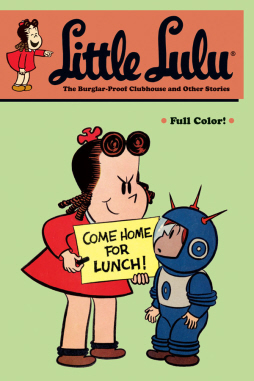 During my heyday as a young comic collector — from maybe 1973-1977 — I primarily chased Marvel titles, with the occasional DC offering like Legion of Super-Heroes, and a smattering of Charlton comics such as Blue Beetle. Like most ten-year-old collectors I scorned kid’s comics, of course.

At least in public. Behind closed doors, I loved virtually all comics, and read whatever I could get my hands on: Archie, Uncle Scrooge, Casper the Friendly Ghost, and even Little Lulu, which featured the comparatively tame adventures of Lulu Moppet and her neighborhood friends as they hunt for wild turkeys in the local woods, solve the mystery of a missing tea cup, and go to school.

I only recently discovered that Dark Horse Comics has reprinted over a decade’s worth of Little Lulu in 29 volumes (!!), many of them in full color. A pretty staggering feat of cultural scholarship, sure, but I have to admit my initial reaction was “Who the hell wants to read that much Little Lulu?”

Me, as it turns out.

Just as I did roughly 40 years ago, I slipped a copy of Little Lulu into a stack of larger comics when I thought no one was looking.  Back then it would go between Amazing Spider-man and Grimm’s Ghost Stories, just before I marched up to the drug store counter with my stack of quarters.  Last week, I quietly added it to my Amazon cart between Hellboy, Volume 1 and Marvel’s collected Son of Hulk, when my kids were in the other room. Listen — no matter how old you are, the scorn of children is a terrible thing.

As soon as that package arrived, it wasn’t Hellboy or Son of Hulk I opened first. It wasn’t even Star Wars: Knights Of The Old Republic, Volume 7, and that baby had storm troopers on the cover. No. It was Little Lulu.

Sure, there’s an degree of nostalgia at work. (Of course, thanks to the rapid onset of old age and what’s likely dementia, I find I’m somehow equally nostalgic towards Hellboy, which I discovered in the dimly-remembered 90s). 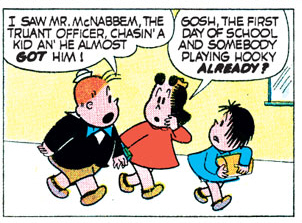 But there’s more to it than that, and chalking the charming appeal of this comic up to a generic tendency “to love all comics” does an enormous disservice to the wonderful humor and compact story-telling of Little Lulu.

Lulu was created by Marge Buell for a cartoon in The Saturday Evening Post in 1935, and appeared weekly in that magazine until 1944. She appeared in ten issues of Dell Comics’ Four Color comic book until graduating to her own title in 1948: Marge’s Little Lulu, which continued until issue #268 in 1984 — a spectacular run of nearly four decades, making Little Lulu one of the most successful comic characters of the 20th Century. She also appeared in 28 cartoons from Famous Studios, and two animated TV series, including Cartoon Network’s The Little Lulu Show (1995 – 1999).

Little Lulu Volume 25: The Burglar-Proof Clubhouse and Other Stories collects six issues of Marge’s Little Lulu, #124 to #129, originally published by Dell Comics from October 1958 – March 1959. They were written and drawn by John Stanley and Irving Tripp, and their version of Little Lulu has all the warmth and humor I remember. 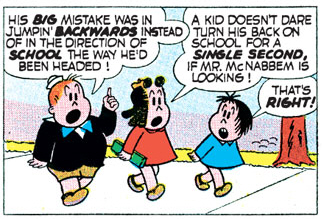 The stories in Volume 25 portray the world as seen through the peculiar and wonder-filled eyes of children better than any other work of fiction I can recall. Rarely straying outside a two-block radius from Lulu’s front yard, the setting nonetheless encompasses a dazzling range of strange and danger-filled landscapes: shadowy caves in the middle of a club initiation, a treacherously steep toboggan run, a dark and magic-filled living room on Christmas eve, the mysterious kitchen of that new girl from France.

A hunting trip for wild turkeys across the street suddenly becomes a dangerous safari into a primeval forest filled with unknown horrors the moment Lulu and her friends lose sight of the street. The morning walk on the first day of school becomes a gauntlet run requiring exceptional courage and invention when the gang discovers the new truant officer is arresting anyone taking an accidental step in the wrong direction.

Magic appears in these tales in its truest and most believable form: in the stories the children tell each other. Just as I believed the tales of local ghosts and horrors whispered to me by older neighborhood kids with all my heart, so too do Lulu and her friends share tales of witches and Indian princesses, and solve mysteries with the help of a potent crystal ball that used to be a door knob.

You can enjoy a preview of the book in the form of a complete 5-page tale, the above-mentioned “Back to School” featuring the evil truant office Mr. McNabbem, here.

Little Lulu is a potent blend of childhood nostalgia and humor, with genuine laugh-out loud moments. Dark Horse is doing the world a favor by bringing it back in print in handsome and inexpensive volumes. Don’t pass it up.

Great post. There are a ton of people in comics who swear by the John Stanley Little Lulu; I never grasped why that was until now.

(Also, this harmonises in an interesting way with a recent experience of my own, which now must be the subject of my post tomorrow.)

Working with books, as I have for nigh on 30 years, I was perhaps inordinately concerned about getting my young son books that he would, you know, actually want to read.
So I brought him everything. The little guy dutifully poured over all of it and did indeed find a number of things he liked to read.

But the undisputed Champion, the most enduring Success in capturing and holding his interest was Little Lulu.

I got him the first Dark Horse volume in 2005, when he was seven. Since then I’ve got him every volume and now, at thirteen, they continue to be books that draw, hold and amuse him, cutting through the haze of TV and computers and video games and social networking and school and football and fireworks and all the nine billion distractions and vital life experiences that surround the youth of today.

I can see Little Lulu as the direct linear predecessor to Peanuts and Calvin and Hobbes. I can see it possessing the timeless charm of a good funny story well told. But most of all I can clearly see this series as being fundamental in making my son want to read.
Marge, I owe you.

Thanks Matthew — glad you enjoyed it.

> Also, this harmonises in an interesting way with a recent experience of my own,
> which now must be the subject of my post tomorrow.

Excellent — looking forward to it!

A great story, John. I wish I’d had your foresight in buying LITTLE LULU for my kids… they cut their teeth on FOXTROT.

Mind you, I handed it to my 14-year old son this morning, and I caught him half-way through it about an hour ago. He usually disdains older comics… I don’t think I’ll tell him the strips he’s reading are over 50 years old!

> I can see Little Lulu as the direct linear predecessor to Peanuts and Calvin and Hobbes.

You know, if I’d had half a brain when I put this article together yesterday, I would have articulated the same thing. The connection to PEANUTS was on my mind yesterday as I was re-reading the comics, and of course CALVIN AND HOBBES hits exactly the same themes. Well said, and thanks for pointing it out.

Seems as though older comics, no matter what the genre, were much more clever in their writing than today’s.

> Seems as though older comics, no matter what the genre, were much more clever in their writing than today’s.

Appreciate the sentiment, but um… what?

If you compare the dialog in 1940s era superhero comics (“So ya wanna play rough, huh?”) to the work being done today by Brian Bendis, Mark Millar, and Warren Ellis, I think you’ll find today’s comics are head and shoulders over their ancestors.

Same for horror comics, romance comics, and most genres, in fact.

I read the older Dark Horse Little Lulu’s in Black and White back in the days when I had more money to buy them.

Perhaps the writing today is better for most comics. Perhaps. But maybe that is because today’s comics are written for Adults.

Go back to the golden age. To the early Harvey’s of Richie Rich and Casper the Friendly Ghost. Those comics were written for KIDS!

In an early issue of Sensation Comics starring Wildcat, the framed boxer Ted Knight comes across a little kid crying because someone stole his comics and he gives the character the idea of becoming a costumed mystery man.

Comics were for kids then. They were innocent and care free and fun! Little Lulu’s writing is real because they were about kids as they were then. So please just enjoy them and accept them for what they were and still are.

[…] in the last few days that I’d like to write about; particularly since it seems to resonate with a recent experience of John O’Neill’s. Earlier this week, my friend Claude Lalumiére sold off much of his library of sf, fantasy, and […]

I’m not too sure if comics are that similar nowadays. The reprints of older comics had more creative plots than those of today. Even the Archies from the 1990s were more on ‘story’ than the pop-culture references that are in a lot of the modern day ones. But, you guys have read more comics than I have. 🙂

That’s probably the most succinct difference between modern and classic comics: the latter were unapologetically written for kids.

And if Mister_Alex wants to argue that kids comics then were better than kids comics today, I won’t contradict him.

(With the exception of Bongo comics, which rock. And Power Pack, of course.)

> Even the Archies from the 1990s were more on ’story’ than the pop-culture references that are in a lot of the modern day ones.

Did you read Archie comics in the 90s? I didn’t — I pretty much stopped reading Archie comics when it dawned on me the character was younger than I was. I regret that now… they were always inventive and funny.

Yes, in the 1990’s was when I started reading Archies. They were very creative and were more about entertaining the reader. In the 2000s most of the stories became politically correct or featured spoofs on current trends. They just aren’t the same anymore. 🙁

[…] a Little Lulu fan, Dark Horse Comics has collected the series in 29 volumes, which I discussed here back in […]