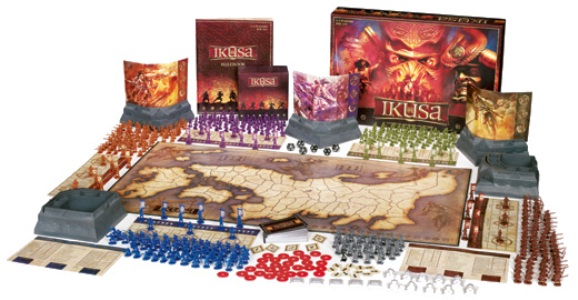 Long ago, in the days of parachute pants and phones with cords, I became addicted to Milton Bradley’s Gamemaster Series of board games. Games such as Axis and Allies, Conquest Empire, Broadsides & Boarding Parties, and Fortress America taking up large blocks of time on Saturday’s all through junior high and high school.

Little did I know the intrigue of big business hijinks going on behind the scenes where my absolute favorite board games were concerned. In 1984 the venerable and one-hundred and twenty year-old Milton Bradley Company was bought out by the gaming giant Hasbro. This moved the GMS [Gamemaster Series] games under a new banner, and when Hasbro acquired the publishing name of Avalon Hill in 1998, the GMS began being published there.

Funny side note: My first ever official interview with a game company came in 1997 with Avalon Hill when it was still independent and located in the industrial district of Baltimore. It was a surreal experience, going on an interview at Applebees and having to answer questions like ‘who was your most powerful role-playing character?’ and ‘tell me about your best gaming moment?’ Yeah, I didn’t get the job, but it was still pretty cool.

Ok, so there you have some history, but history isn’t the purpose of this particular review piece, which of course is to discuss another classic GMS game, Ikusa. Now you might be thinking, ‘Ikusa… never heard of it’ which is true in name only. You see, Ikusa is the reboot of Samurai Swords, which in turn is the repackaging of the 1986 GMS game Shogun.

I’ve now had the pleasure of experiencing all these boxes, as a player of Shogun, a player/owner of Samurai Swords, and a player/owner/reviewer of Ikusa.

There is little doubt that this is one of my favorites in the GMS, and back in 86, I was loving it and heady with the complementary release of TSR’s Oriental Adventures [another side note, Hasbro acquired Wizards of the Coast in 1999, after Wizards acquired TSR in 1997… so basically all my memories of youth are now owned by Hasbro]

In those years it seemed the various intrigues of the Orient had opened to the West, and I sat strategizing and moving samurai, ninja, and ronin at my friend Mark’s picnic table like a shogun of old. This game makes great use of feudal Japan as a setting for epic combat, each player controlling one of five powers that via of dominance.

The powers share the same five units, those being Daimyo, Samurai Bowman, Ashigaru Gunners, Samurai Swordsman, and Ashigaru Spearman. These forces can take on provincial combat alone or inside an army, which is always represented by a banner and a daimyo. Three such armies per power roam the battle board, and to lose one in combat is devastating to a player’s hope for victory.

Koku money chips are used to purchase new units as well as hiring Ronin swordsman as well as Ninja assassins in a blind bidding system at the beginning of each turn. I enjoy this aspect, and although the Ninja’s ability to temporarily incapacitate an army for a round by murdering the daimyo is cool, my favorite part are the ronin who can sway a battle as a fantastic first line of defense or offense just as they did in reality. Castle and fortress production also allow players to heavily defend provinces and protect set shipping lanes where troops can move about from island to island.

Still, I’ve always found that the most entertaining aspect of Ikusa is the dealing of player to player alliance. In the game you can afford to trust no one, and yet you must do so as you are forced to leave back-doors undefended, and alliances struck to allow your armies to move against other powers while your home provinces are scantily defended. This makes for a constant level of stress among players, each watching the other while a careful tally of player provinces controlled sways the game; each participant trying to keep everyone else from getting the required numbers to win. It becomes a game of checks and balances, and yet at some point the scale is tipped and all must bow to the new shogun and his dominance.

Truly, it’s a fantastic game, and that’s the reason it’s been around so long and still maintains viability. As for the newest version, I’d say it carries much the same properties as its predecessors, with beautifully updated art by Steve Argyle and Gonzalo Flores. A single knock on this version is the change from hard plastic play pieces to soft plastic, some of the bases becoming warped in packaging. Still, I’d give Ikusa four stars out of five and highly recommend picking it up for anyone who loves strategic warfare games.

As always, best to you and good gaming!

[…] took notice and tossed their hat in the arena with several very well received games, including Ikusa and the epic Conquest of Nerath. With just a few titles, WotC has become a heavyweight in fantasy […]

[…] slightly more than you’d expect to pay for a comparatively-sized fantasy game today, like Ikusa and the epic Conquest of Nerath. Truly, life is […]

[…] releasing terrific titles that have rejuvenated the entire genre, like RoboRally, Small World, Ikusa, and the epic Conquest of […]