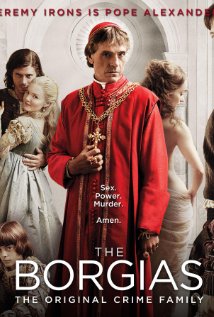 I have to admit, I am a little disappointed with the mini-series about the Borgias.

I mean, if ever one was looking for a great excuse to really unleash sex and violence in a charnel house manner that would make True Blood look like The Sound of Music, it should have been The Borgias.

The strange thing is that the actors, for the most part, are pretty good. Cesare looks every bit as handsome and charming as he is supposed to be. Jeremy Irons is Jeremy Irons. Joanne Whalley is perfect for the part of an aging, but still attractive courtesan. Only Giovanni and Lucrezia are a bit thin; Giovanni is a ham who always looks as if he is an eyelash away from shouting “aha!” and drawing his sword for no apparent reason, while Lucrezia is just ever so bright and happy and innocent, she seems more like Little Orphan Annie singing “The Sun Will Come Out Tomorrow” than the most infamous slut in history. One of my housemates once had a cockatiel named Lucrezia; he always enjoyed having to repeat the name to visitors and explaining that she had been named thusly because she was a very bad girl.

Michelotto Corella isn’t bad, but even he, the prince of Renaissance assassins, tends to come across as a lost puppy. Granted, a lost puppy that will rip your throat out if Cesare blinks at you the wrong way, but a sad, lost puppy nonetheless. Even when he is seducing a girl prior to leaving her severely carved up body in a cardinal’s bed – which raises some disturbing if belated questions about the famous horse head scene in The Godfather – you tend to feel a little sorry for him. He doesn’t seem to be enjoying himself, I mean, one tends to want to see a little more enthusiasm, a little more joie de mort in one’s lethally efficient psychopaths.

The problem, I think, is that at some point the producers decided that the Borgia family didn’t get a fair shake from history and decided to try to portray them sympathetically. But this is rather like producing a movie about Hitler that focuses on his love for animals and commitment to vegetarianism. Still, it’s not a dreadful cartoon like Rome or Spartacus and it’s always possible that things are going to pick up significantly, but thus far, four episodes in, The Borgias simply isn’t a patch on A Game of Thrones.

Surely the writers for The Borgias have read Mario Puzzo’s posthumously published The Family that makes the case they are the original Mafioso crime family, even though they’re Spanish.