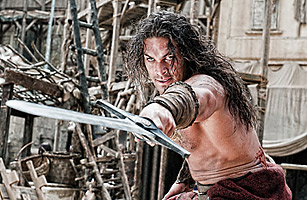 The intrepid Leo Grin isn’t what one would call delighted with the new Conan movie:

I daresay we can soon expect to hear from the admirers of the New Nihilism informing us that Leo has once again managed to miss the point, that the new Conan the Barbarian film is, in fact, a brilliant reinvention of a genre that had grown tired and stale, that it is admirably adult in its moral ambiguity and creative depravity, and may be the greatest film since Citizen Kane. Which leads me to contemplate two things. First, since when did “adult” come to imply torture, incest, and rape? I mean, I enjoy spending a quiet Saturday night creeping about the bushes at the local university armed with chloroform and a knife in search of a new friend to bring back to my soundproofed playroom as much as anyone, but sometimes one would like a little escapism in one’s fantasy entertainment. You know, just a simple quest to find the Macguffin, defeat the Foozle, and save the world or something would be nice. Second, someone desperately needs to make a movie entitled Citizen Solomon Kane about an elderly Puritan who owns a media empire and dies with the mysterious word Rosebud* on his lips after a long life spent reporting on politicians and industrial magnates by day and slaughtering the bad ones with a sword by night.

Even that would be less absurd than the New Nihilism’s oft-staked claim to “realism” in both its literary and cinematic guises. The idea that incessant wallowing in increasingly improbable sex and violence makes a book or a film more realistic or mature should be taken about as seriously as the notion that Hostel is a travel documentary about lodging in Eastern Europe and Saw is an instructional film on industrial safety.

*Rosebud was his soul.

Unfortunately, just as the legacy of REH has overcome the slanders and lies of Sprague De Camp, we get this. Hopefully, few people will waste their money on this awful film and those that do won’t associate it with Mr. Howard’s writing.

Delight in rape, torture and gore is not adult. That is the signature of pathology and socio-pathology. Or at best, the signature of over-indulged, over-protected children who don’t know anything of the real world, despite this claim that they are full of reality.

There are almost as many reasons to be disappointed in the new Conan movie as there are fans to see it.
Someone like Leo will see further evidence of the lurid sensationalism he so despises, but Arnold Schwartzenegger’s fans have noted that Jason Momoa’s muscles aren’t sufficiently laced with prominent veins, some Conan fans are angry that the Cimmerian’s eyes aren’t blue, while others curse the fact that virtually any of the power that Conan-creator Robert E. Howard invested his mythic stories with is distantly peripheral at best.

The primary reason I love Robert E. Howard’s work isn’t because it’s sword and sorcery fiction, or because it’s vivid and intense, or because it’s violent and cathartic, or because it’s about a big dude who kicks a lot of ass.
The first thing I love about Howard’s work, from his polished masterpieces to his unfinished fragments, is that the man could tell a story. His stories have bones– strong plots that uncoil seemingly effortlessly, drawing a reader in so tightly that the mechanics of the tale are invisible and events just seem to happen with a fierce forward momentum that is utterly spellbinding.

The new Conan movie has no real story. The plot is a vague collection of tatters, story elements from dozens of other films, clumped together with a curious disregard for cause and effect, time and place, character and action. The hero is motivated through the film by a desire for revenge, but even this bare-bones simple story is buried beneath patchwork layers of unexplained events, developments and deeds. Even by the standards of B-movie genre films this is a sloppy, incoherent story.
And that, to me, seems a greater disservice to Conan’s creator than anything else about the film.

A number of Howard fans have gotten behind the movie. The rather sad idea seems to be that if people back this one up and shell out a few dollars in support, that the next Conan film will be something closer to Howard’s work and actually be worth spending a couple hours of your life watching. If the box office returns of the first weekend are any indication, a sequel is pretty unlikely.
It took thirty years to finally put Conan back up on the silver screen. I don’t think they’ll be able to do it again in my lifetime.
And I’m okay with that.

Oh, Howard was as capable as any of a somewhat random plot. Take “Shadows in the Moonlight” — once they get away from the original problem, they draw a ferocious ape-man that is lusting after Olivia, pirates with whom Conan has some bad blood, and uncanny statues from when a god turned men to stone for murdering his son, but inexplicably let them come back to life when moonlight shone on them.

He generally managed to pull it off.

There is nothing more childish than an earnest desire to appear very grown-up.

“First, since when did “adult” come to imply torture, incest, and rape?”

Seems like you’re late to this org-, I mean, party. Hardcore gamers had that crap figured out years ago. They call it “Art”.

Okay, I’m going to throw it out here:

I review a lot of movies here at Black Gate. It’s sort of become my recurring topic.

Do people want me to review this movie, or would they rather somebody else take a chop at it? We do need to have an “official” BG review of the movie, but since I’ve certainly had my say on summer films, would people rather another BG contributor do it? (Or, BG contributors, would you rather do it?)

Never mind. John Fultz reviewed it. I’m off the hook.

I already have a post on a different topic ready to go for Tuesday, but I thought . . . “Maybe I’m expected to review it.”

Huh. So we’re not going to get your review just because we have two already?

Because I’m about to publish a magazine and am a REH fan I feel obliged to see this movie. The working title of my review is “Hairy Ballz of the Gawdz this Sucks A—!!!” based on the trailers, stuff I’ve read about it. But I owe them a fair watching, my stuff will be rabidly non-pc and I’m sure I’ll get scathing reviews from those who never really viewed my stuff.

But I want this movie to flop and disentigrate so be it next year or 30 years from now, the next filmmaker spends $ on at least a good, deep story too.

And I’m no “elitist”.. I LOVE “Thudd and Blunder” also. I’d have had no problem with this movie if it was “Sword and the Sorcerer 2”, “Ator Re-Loaded”, etc.

The mashup I most want to see is Moby Dick Reloaded, since Ahab basically believed his consciousness was trapped in an artificial virtual reality. Not that I want to see it enough to write it, but somebody ought to.