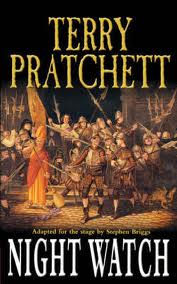 After much discussion of NPR’s 100 greatest science fiction and fantasy works, I was moved to construct my own list of what I consider to be the top 50. As with all such lists, this is somewhat arbitrary, nevertheless it should be taken as complete, definitive, and the final word on the matter. I see no purpose in honoring innovation for innovation’s sake when others have subsequently done it better, for example, John Polidori’s The Vampyre and Mary Shelley’s Frankenstein have both been long surpassed as examples of their type, whereas the same is not true for Tolkein’s oft-imitated The Lord of the Rings or Orwell’s Animal Farm. In some cases, I have chosen to highlight a single book, Dune, for example, whereas in others I have chosen to view a series as a whole. Night Watch is easily the best of Terry Pratchett’s books, but it cannot be judged fairly in isolation as one has to have a fuller understanding of Ankh-Morpork to fully appreciate the novel. I have paid zero attention to book sales or authorial reputation, I have read all of the books on the list, and I have tended to rate genuinely amusing books more highly than others might due to the additional degree of difficulty involved.

I further note that if you happen to disagree with the reverence shown to Mr. Ray Bradbury, you are clearly inhuman, possess no soul, and should consider returning to your home planet. If you have not read or heard of Tanith Lee, people should throw rocks at you on the street until you rectify the error. On the other hand, if you have not read Hesse, that is understandable since he’s not traditionally considered a genre author. But do yourself a favor and read the book anyhow. And yes, Edgar Allen Poe should by rights be on here somewhere near the top, but the metric is books and/or series, not authors and/or short stories.

I voted in that poll, but as I noted on my Facebook page, I’m wary of voting on any list that doesn’t include Philip Pullman’s His Dark Materials, easily one of the best fantasy series I’ve ever read, but at least they’re list did include Sheri S. Tepper’s “Grass”, easily one of the best sci-fi novels.
But she didn’t make the winning list, nor your list, so I don’t trust either of them. 😉 (And actually, her Marianne fantasy trilogy SHOULD be on there, but almost no one but extreme Tepper fans has even heard of it).

Note to self (once again), proofread BEFORE hitting “Submit Comment.”

Interesting that you put Dandelion Wine as your top Bradbury choice. Maybe I’m remembering wrongly, but I recall that being the least fantastical of his fantasies (and surely we’re clear that Bradbury writes fantasy not SF).

It is the least fantastical and yet the most magical. And yes, we’re quite clear on that. The range of life it explores, from youth to old age, is simply unmatched in the genre.

Interesting list. How do you feel Frankenstein’s been surpassed?

No Fritz Leiber, Karl Edward Wagner, or Clark Ashton Smith? I’d expect that from the waste of tax dollars that is NPR but not from you Theo.

No children’s books. Hence, no Pullman.

Great to see love for the Pliocene Exiles and Lloyd Alexander but sad to see any for Dragonlance. I can’t deny the impact they had but I can’y say it was a good one.

“No children’s books. Hence, no Pullman.”

The Dying Earth books (Dying Earth, Eyes of the Overworld, Cugel’s Saga) should be at least at number two on the list. Those are three of my five “desert island” books right there. And there are still his other brilliant series — Lyonesse and The Demon Princes — that far exceed the majority of what I see on this list of 50.

Re: the lack of Pullman. I think you could make a better case for including the Dark Materials in a non-YA list than you could for Narnia which I think is clearly aimed at children, while the Pullman skews a bit older. But, whatever. I know I’m harping on Theo’s favorite, and, of course, it’s his list, not ours.

More egregiously, I’d take issue with the notion that Frankenstein has been done better. Even if it has, come on, this is the birthing novel in more ways than the intended pun. It’s like leaving Moby Dick off a list of great American novels.

I think we have less room to whine about Theos’ list than NPRs.

Let him fucking have it.

This is probably the only list that will have Hesse, Tolkien, Lovecraft, Lee + Bradbury, in a top ten.

The inclusion for Dick is VALIS. Seriously. Full of win.

Probably also the only list that doesn’t include King.

Just to be clear this really doesn’t look like ‘my list’ would, but that’s kind of the point…Let it be…

Glad to see Douglas Adams on your list. While most fans seemed to dislike his Dirk Gently series, since it wasn’t H2G2, I quite enjoyed them along with the rest of his other writings.

As for the “greats,” we need to move on, just as writing has. The great books of the past are classics. If every list had to be filled up with the “greats,” there would be little point in bothering with lists or even reading anything new. Just as each generation has it’s actors portray the same stories over and over, each generation needs to have it’s great writers as well.

True, it’s purely subjective, but “let him have his list” takes all the fun out of commenting. My gripes are as follows — no David Brin, two-time Hugo award winner? No Saberhagen? No “Riverworld?” No Heechee Saga? And why is Anne Rice on this list, or even within shouting distance? Pullman should be on there — miles ahead of Narnia, as is Garth Nix’s Sabriel series. Gotta love Tolkien, but Martin’s the best there ever was, and Amber must be higher.

I further note that if you happen to disagree with the reverence shown to Mr. Ray Bradbury, you are clearly inhuman, possess no soul, and should consider returning to your home planet. If you have not read or heard of Tanith Lee, people should throw rocks at you on the street until you rectify the error.

Your introduction to the list is even more fun than the list itself. You are now officially a person I’d want to have coffee with at a convention.

I share the curiosity of several commenters above: Whose take on Frankenstein beats Shelley’s, in your view? The question may be which “it” is the one you’re thinking of in “done it better,” because Shelley’s doing a lot of things in that book.

Awards are just as subjective as Theos’ or any persons or entities list(s).

Plenty of admirable writers come from the ‘awards epoch’, and have won few if any such idols of dark glass.

Some admirable writers rarely even get a nomination.

I hope you have read the stuff on Theos list, before you complain however…

If you are entirely serious and ‘Martin is the best ever’ and you are taken aback that Rice is ‘even within an ear shot.’

There is subtext in your comment that SF presence is underwhelming. I’m not sure if you intended this or not, but it is pretty close to the ‘surface’ of your comment, and it’s a interesting shade of grey to add.

I’m not one for subjectivity wars. So I’ll probably leave it here.

Radiant Abyss – I concede the point about awards, but I would still include the Uplift Wars.

I have not read every book on Theo’s list, but there are several that I have read that I would place well behind my nominees, including Ms. Rice, and yes, I was serious. If vampires must be included, I thought Saberhagen’s Dracula Tape and its progeny were far more entertaining (and I would include Empire of the East/Books of Swords as well).

Though your comment should be left alone, since it makes me sound deeper than I am, I did not intend to suggest the lack of quality SF books on the list. SF dominated my youth, and fantasy swooped ahead in my teens and has remained firmly in first. I simply tried to recall which fantasy or science fiction works still resonate in my memory. I should have included John Varley, by the way, and maybe David Feintuch (both SF, I know). There should probably be separate lists in order to: (1) reduce skewing; and (2) give us twice as much to argue about.

Watch any Movie or Read any Book Legally for Free! - Horton's Club