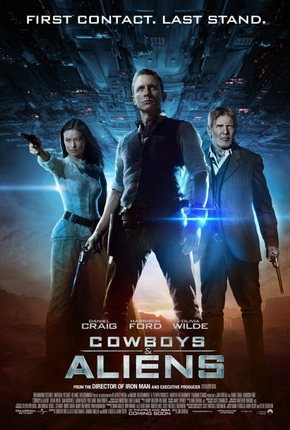 Thunderation, aliens. We was havin’ ourselves a fine little Western show here in this town of Absolution. Then you come riding in, a-blastin’ and burnin’ everything like it was a Saturday night after the cowpokes got paid and the whiskey gone dry. You turned our durned movie into about as interesting a place as a salt flat. Hell, we had almost made this Ford fella entertaining again, and it ain’t been since the War of the Southern Rebellion that folks enjoyed anything that city slicker’s done.

So thanks fer nuttin’, alien varmints. Ain’t you got plenty a’ other moving pictures this year that you’re blowing your cannons in? Now stay on yer side of the barb-wire fence, and if we catch you branding one of our cattle again with those laser doohickies, we’re pulling leather on you and leavin’ you for the buzzards and worms who ain’t particular about what their chow is.

The “Weird Western” genre has found its niche along with other subsets of steampunk in literature and comics — but it has never caught fire on the big screen. Wild Wild West and Jonah Hex were failures, and deservedly so. There are also far earlier examples, like 1971’s Zachariah, a rock musical Western based on Siddhartha with music by Country Joe and the Fish and Elvin Jones, and starring Don Johnson. That sounds fun, right? Sorry, it isn’t. Cowboys & Aliens, from Iron Man director John Favreau and based on the Platinum Studios graphic novel, fares better in the quality department, but it is still an inert bore that fails to merge its two genres into anything entertaining. Mostly, it’s a slog.

And that is a shame, because for the first twenty minutes, when it stays strictly a Western, Cowboys & Aliens is a fairly good Western. Aliens are much more common on screens today than gunslingers and dry good store owners, and that makes the Western part of the film most interesting and fresh part. It seems that Favreau was having a good time with this as well. Just watching the steely and silent Daniel Craig push through swinging saloon double doors is a small joy.

During these scenes, a tight group of conflicts build up, with tempers ready to flare and copious blood about to spill onto the desert sands. An amnesiac stranger with a bizarre metal bracelet on his wrist (Daniel Craig) wanders into the town of Absolution, which is under the control of vicious rancher Dolarhyde (Harrison Ford). The stranger riles up trouble with the rancher’s bully of a son (Paul Dano) and the sheriff risks raising Dolarhyde’s anger when he tosses the boy in jail. Then it turns out the stranger might be a notorious outlaw, and the match is ready to light the powder keg. 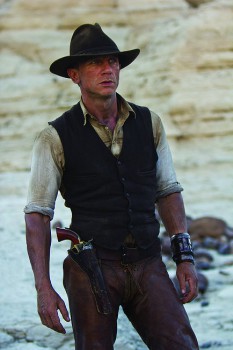 Honestly, there is no need for aliens to show up in order to make this interesting. It is doing fine. But Cowboys & Aliens only got greenlit because of the title concept, so insectoid-shaped glowing ships start blowing up the town and lassoing people, including relatives of a few of the main characters. The film then stops, finds it has a bullet in its gut, and slowly slides off its horse to die in the dust.

All previous conflicts in Cowboys & Aliens vanish once the aliens attack, and the film turns dour and not the least bit fun as the townspeople go chasing the aliens to save their relatives. Craig’s character has flashbacks about his wife and his abduction — a mystery that everyone in the audience will figure out half an hour before a Peyote trip lets the characters in on it — and an enigmatic woman named Ella (Olivia Wilde) keeps claiming she can help out. To fill in time, the other characters occasionally yell about how “we gotta get our people back.” And that’s about all that happens for the rest of the running time until the finale, when the aliens prove to be utter incompetents when facing the awesome power of arrows.

The aliens aren’t in the film that much, but they manage to weaken everything even when off screen. When they are on screen, they manage to be among the dullest E.T.s I’ve seen in a year already packed with bland space critters. These invaders have zero personality and don’t even work on the level of brute monsters.

I can toss some praise Harrison Ford’s way, and that’s a small relief in this boring 118 minutes. Ford does really seem to be trying in the part of gravely Dolarhyde, and since the man has operated on auto-pilot for the last ten years in every role he’s taken, I appreciate him soldiering up here.

As for Daniel Craig, the man seems born to be a Western actor. He is much more believable among the desert buttes slinging a six-shooter than he is playing the British espionage game in a European casino. A meaty role in a tough Western could have been glorious for the actor. Here, Craig just wanders through the story, occasionally frying things with his laser blaster cufflinks, and engaging in a tepid relationship with the blank fashion magazine cover-girl Ella. I loved Olivia Wilde in Tron Legacy, but she does nothing at all in what is supposed to be the crucial mystery role in this movie. And why is Sam Rockwell, of all people, so unforgivably dull as a saloon owner? Why is Keith Carradine such a non-presence as the sheriff? This is a great cast, and once the aliens walk on stage I can enjoy almost none of them. And I am getting pretty tired of having to place everything in italics, but I want to shout a bit at this movie. 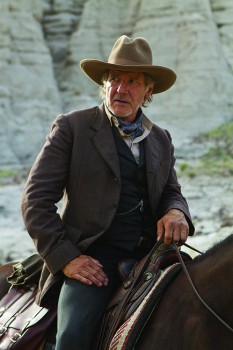 Among the humdrum is a huge missed opportunity, which is “Religion.” The 1880s had no way of understanding super-tech alien science with the knowledge they had available, especially poor folks living on the frontier who might have never seen a large city in their lives. When giant flying objects come screaming from the sky and yank humans into the clouds while causing explosions using bright lights, people would immediately assume it was demons or the Devil’s spawn or maybe God’s wrath. Yet only one character suggests this in a single line, and the town preacher (Clancy Brown), yes, the preacher, shoots down the idea. (Italics!)

To me, this is lazy, lazy writing. The religious implications of the aliens on the minds of frontiersmen would be immense. The aliens aren’t supernatural, but no other explanation would make sense to these people. It should have turned into an important conflict among the survivors and given an aura of real terror among them. Instead, the cowboys of the title treat the aliens of the other half of the title the same way anyone in a modern science-fiction action movie would.

This may sound like I’m nitpicking, but I have already stated how much of the film doesn’t work on a standard drama level. This lack of attention to the psychology of the setting is unforgivable, and it passes up a clash between the two genres that the film wants to mix. What do cowboys think of aliens? Apparently, nothing.

ILM receives credit for the special effects, but I think they farmed out most of the work to a children’s computer summer camp. It’s good for kids’ programs to get funding, but . . . these are among the shoddiest effects I have ever witnessed from ILM. The designs for the aliens and their craft are uninteresting, and coupled with drab effects work, it results in action scenes that only create excitement because each one means the movie is that much closer to ending.

Man, I am feeling low. I love Westerns. I have no problem with doing genre-mashing. If slamming together science fiction and horse opera will get people into the theaters, I will more than accept it. But . . . filmmakers, you have to try beyond having a catchy B-movie title. If the Western part interests you more, then just make the damn Western! You know that True Grit thing last year? That was one of the biggest hits of 2010, and it was “just” a Western. So, if the aliens aren’t working, chuck ‘em on the fire; we’ll roast s’mores over them. We have thirty more alien invasions left this year — I saw the trailers for two before this one — we can go see those if we need an alien fix.

I hate to say it indications are that Jon Favreau is really not a very good filmmaker. Even Iron Man takes a fair amount of criticism for a poor climax and unimaginative action scenes.

Wow Andy, you sound like a wife… ‘poor climax and unimaginative action scenes’ 😉

Thanks for the review, Ryan, I’ll be sure to miss this one!

The only part of your review that I agree with is that this is Harrison Ford’s best performance in years. The Western parts of the movie were taken from old John Wayne films.

The Dolarhyde character is just the Dunson character from Red River. Then it segues into The Searchers only with aliens instead of Apaches. My point being this was far from a good western.

The only reason Cowboys and Aliens works is because it’s to genres complimenting each other. Neither of the genres are employed in interesting or innovative ways. But it’s fun to watch them interact with each other.

I agree there should be more westerns, but I’d like there to be some innovative story telling involved. I had the same problem with Tue Grit and 3:10 to Yuma. If you’re going to spend so much on a western, I’d like to be one I haven’t seen before. There’s a lot of Max Brand and Zane Grey novels that could stand the Hollywood treatment. Or better yet, someone could write something original for a change.

It looks like I’ll be seeing this one this weekend, so I’ll have to hope my reaction is far from Mr. Harvey’s:)