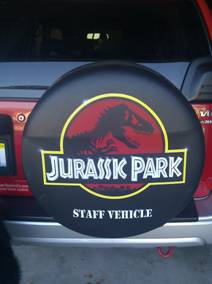 Let’s start with the picture on the left.

This is the back of my SUV. I would like to draw your attention to the customized wheel cover one of my artist friends presented me with a couple Christmases ago. If you were sitting in the driver’s seat you’d be perfectly positioned to see my Jurassic Park Test Vehicle Identification Tag hanging alongside a tiny Velociraptor.

This of course proves I am a geek. We established that quite some time ago so let’s move on. What this really proves is that I’m a huge movie geek with a major Jurassic Park fixation, which coincidentally positions me perfectly to deliver the following news in the most expert of fashion.

JP4 is coming and I can prove it. Whether this is a good thing or a bad thing is up to you to decide, but I think you’ll agree it’s at least worth imagining at this point.

The original 1993 Jurassic Park movie, which earned over $914 million, and the sequel The Lost World: Jurassic Park, which earned $618 million, were based upon novels by Michael Crichton, who died unexpectedly in November 2008. Jurassic Park 3 departed from Crichton’s story line and was largely considered “the end” of the franchise due to its very poor box office performance.

What you probably have already heard is that Steven Spielberg raised the hopes of geeks everywhere by telling fans at San Diego’s Comic Con that a new JP sequel might be coming out “in two or three years.” Spielberg also mentioned he might oversee the new project as a producer.

But I’ve got some additional scoop you may not have heard. 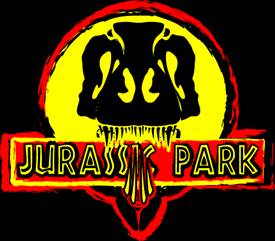 Back in January 2010, Joe Johnston, who had worked on all three previous JPs declared himself set to kick-off Jurassic Park 4 as the beginning of a new trilogy that “breaks away from the first three.” He drops a few hints:

Well, there is a great story for the fourth one that I would be interested in getting involved with and it’s nothing like the first three. It sort of takes the franchise off in a completely different direction, which is the only way I would want to get involved.

And about a possible setting for the plot:

Why would anybody go back to that island? It was hard enough to figure out the second and third reason for them to go.

In June of this year, Spielberg was in talks with screenwriter Mark Protosevich, who wrote the screenplays for Thor and I Am Legend, and kicking around ideas for a Jurassic Park update.

Several years ago, Speilberg worked with Protosevich on a potential remake of Chan-wook Park’s 2003 film Oldboy that was to star Will Smith. That film ran into rights problems and didn’t come to fruition, but Spielberg, who directed the first two Jurassic Park films and was an executive producer on the third, decided that Protosevich had the chops to fashion a story for a potential fourth film in the franchise. 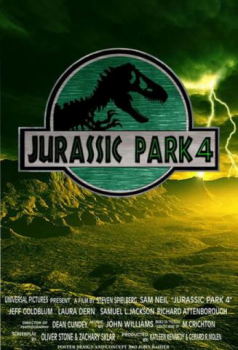 So flash forward to San Diego where Spielberg drops one more tantalizing tidbit, “We have a writer (presumably Protosevich) who is writing a treatment and hopefully we will make Jurassic Park 4 in the next two to three years.”

He didn’t give any plot details away and refused to say another word. However, Joe Johnston apparently couldn’t contain his enthusiasm and once again confirmed JP4 was in the works.

“We are in discussions about Jurassic Park 4,” he told my friends over at ScreenRant . “The most important thing I can tell you is that it starts a new trilogy that will go off in a different direction — a completely different direction that is very exciting.”

It’s pretty clear Steven Spielberg has dinosaurs back on the brain lately with the impending launch of the television series Terra Nova on Fox in the fall. And then there are all those union special effects guys who haven’t had their CGI dinosaurs out for a walk since 2008.

With the recent rebirth of 3D and soaring improvements in digital design marshaled by everyone from James Cameron to Pixar, Jurassic Park is ripe for evolution into the 21st century.

However for now at least, it’s all on the down-low with both Universal, which released the trilogy, and Spielberg’s camp stressing that no one has been engaged to write a script and that the discussions have been purely exploratory. But the idea is kind of a no-brainer. 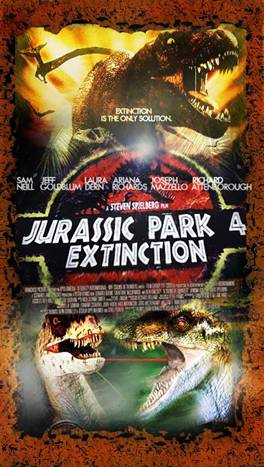 There is pretty solid evidence surrounding the theory that the theme of JP4 will be “extinction” and that the title of the move may even be Jurassic Park: Extinction.

Some fairly fancy “unofficial” artwork has started popping up along with this (fake?) movie trailer. But when that many trails lead to the same end, there’s usually something to it.

Keira Knightly has been rumored to be trading in her pirate boots for safari gear since 2003, playing either Dr. Alan Grant’s daughter or the adult “Lex” from the original movie. However, the latest rumors are that none of the original characters will appear in the reboot.

And though the web is rife with rumors of at least five different story lines, my sources tell me that nothing has passed muster with Spielberg at this point so we’ll just have to be patient.

With Avatar, James Cameron showed us just how far an ambitious filmmaker can push an integrated, immersive 3D world and a new Spielberg-produced Jurassic Park that takes full advantage of those tools could be (pre)historic.

I’m continuing to cyber-stalk my Hollywood connections for more juicy bits on this topic, but needless to say stampeding dinosaurs endangering humans, fighting each other and smashing things never gets old.

So what do you think? Are you looking forward to a JP re-boot? Have you heard any rumors about the fourth installment? Post a comment or drop me a line at sue@blackgate.com.