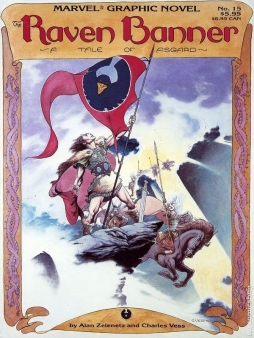 Marvel Comics has published some great works over the nearly fifty years since the company took its modern form with Fantastic Four #1. One thinks of the suberb superhero comics of Jack Kirby and Steve Ditko, but there’s a lot more than that in Marvel’s vaults. William Patrick Maynard’s done some strong work on this web site looking back at some excellent series, and I encourage everyone to take a look at his current posts on Tomb of Dracula, perhaps my own favourite Marvel book of the last forty years.

You can find Tomb of Dracula, like most Marvel books, in several reprint collections. But at least one of the best things ever published by Marvel isn’t currently available in any form. First printed in 1985, as part of Marvel’s early “Graphic Novel” line — actually a series of softcover graphic albums, about sixty pages each — The Raven Banner, written by Alan Zelenetz, with art, colouring, and design by Charles Vess, is a brilliant work of fantasy. The book unites a strong sense of myth, a deft touch in plotting, and highly impressive visuals to tell “A Tale of Asgard” (as its subtitle proclaims); and a powerful tale it is, filled with wonder and sorrow.

The Raven Banner is the story of Greyval Grimson, heir to a family entrusted with one of the greatest magical items possessed by the gods of Asgard, the Raven Banner of the title. When unfurled during a battle, the banner will grant victory to the army which holds it — at the cost of the life of the banner’s holder. The book opens with one such battle, in which Greyval’s father dies; but Greyval, we find, has been enticed under the earth by trolls, mischievous masters of illusion allied to the giants. Greyval feasts and drinks among the trolls while the battle plays out above, at which point the trolls let Greyval go, believing a prophet who says that Greyval will kneel before them till the end of time. Above ground, Greyval marries his love, a valkyrie named Sygnet; but when he finds that the banner’s been lost, he realises it is his duty to retrieve it. Only, as an Asgardian, Greyval need never die. So will he give up his immortality for the sake of the banner? What is the value of duty? What is more important: the joys of life, or a glorious destiny? 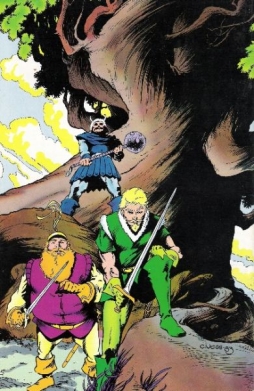 The book’s a clever, serious look at love and duty. It’s nominally set in the Asgard of the Marvel Universe — Thor and his friends the Warriors Three turn up in the background of a couple of panels — but it requires no background in Marvel lore to appreciate. Nor do you need to know that the story’s based on actual folklore, though some of the touches of Norse culture in the book are nice to see. It’s a powerful and affecting story about fate, sacrifice, and the choice of values.

Artist Charles Vess went on to illustrate some of the best issues of Neil Gaiman’s Sandman, as well as Gaiman’s novel Stardust. He also self-published his own comic series The Book of Ballads and Sagas, and provided illustrations for a number of Charles de Lint’s fantasies. His work in The Raven Banner isn’t quite as assured as it later became; his faces are very similar, and the anatomy of some characters seems on occasion subtly off-kilter. But it’s still excellent work, showing his brilliant design sense, inspired by Alphonse Mucha, Arthur Rackham, and Art Nouveau.

The landscapes of Asgard, as Vess depicts them, are grand and wondrous things — mist-shrouded peaks, deep forests, underground thorn-filled caves, sunsets over bloody battlefields. Asgard is both tangible and fantastic, a sublime fairy-tale landscape filled with myth and monsters. Every tree root and high crag is not only drawn in detail, but seems to serve some compositional purpose in the drawing. 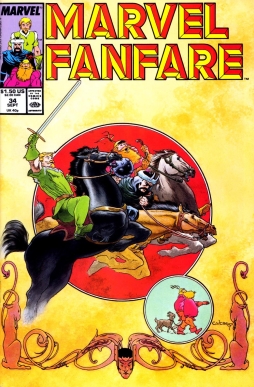 But as excellent as his rendering is, Vess’ storytelling is even more impressive. He moves the reader’s eye through the page with ease, dropping in silent panels to draw out a beat of the story, or using a horizontal panel to break a page rhythm or extend a reflective moment. He lets his camera move about as needed, frequently pulling back to open up the world of the story, to give a sense of scope. But for all his skill at drawing landscape, Vess isn’t afraid to leave the backgrounds out when he wants to conctrate his readers’ eye on the characters.

Writer Alan Zelenetz doesn’t seem to have spent much time in comics, and that’s a shame. His story here is a great fantasy, well-structured, inventive, and with a strong sense of how to use mythic material to extend and broaden his themes. The atmosphere is perfect, notwithstanding some moments (mostly early on) where the dialogue seems over-full of exposition — and those mostly stand out because the dialogue is otherwise so distinctive, with its own diction, a subtly archaic flavour that helps establish character and tone.

The story’s tight but rich, packing a variety of incident and plot strands into 60 pages. The characterisation’s fairly simple, but effective. We watch Greyval grow as he finds his way through his adventures, learning from his friend Balder the Brave, and himself setting an example for a whimsical otter-god named Oddbrand, who becomes his squire and tagalong. The story builds nicely to a dramatic and satisfying climax, and does not shrink from its own tragic logic. 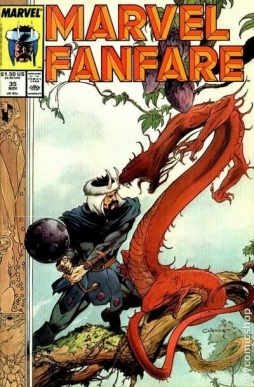 You can see a number of sources in Zelenetz’s writing; Kirby, a bit, but also a bit of Shakespeare, and the Eddas, and fairy tales, and perhaps classic pre-Tolkien fantasy — it feels a bit like the Narnia books, for example, or maybe T. H. White’s mix of humour and sorrow. The fantasy effects are familiar, but brilliantly-deployed; the tale’s filled with talking animals, guardians on bridges, prophecies that come true in unexpected ways, and journeys through harrowing lands. All these things help illustrate character, metaphor, and theme, in unexpected ways.

The Raven Banner isn’t just mythic, it’s mythopoeic. The fantasy is creative and constantly unpredictable, a rich mixture of grimness, whimsy, and beauty. The characters travel through unknown lands, journey through the underworld, grow and change in accordance with the trials they must face. And, at the end, the hero faces his ultimate fate. I don’t know how many times I’ve read the book in the quarter-century I’ve owned a copy; I still find something new in it every time.

The Zelenetz/Vess team produced another work set in Asgard. But if The Raven Banner is a tragic winter’s tale, then The Warriors Three Saga is a sprightly, summery comedy. I think it’s a lesser work, but, unlike The Raven Banner, it is in print. 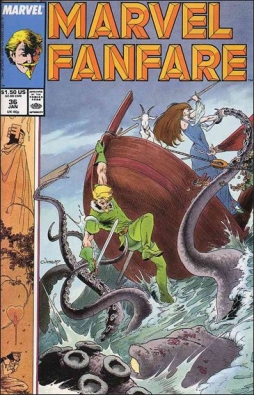 The story was first published in issues 34 through 37 of the anthology title Marvel Fanfare (issue 13 of the same book also saw a Zelenetz/Vess short story, in which the Warriors Three sought for the lost Bragi, god of poetry). The Warriors Three are Fandral the Dashing, Hogun the Grim, and Volstagg the Voluminous, heroes of Asgard and friends of the mighty Thor. Their names, and titles, tell you what to expect; the Three Musketeers as Norse Gods. This story sees those archetypal characterisations pushed to the limit, and lightly turned back on themselves.

The tale has a perfect fairy-tale structure: a young couple in love are set to marry, and it has been prophecied that the wedding must take place at midnight on Midsummer’s Eve, or else Asgard will be lost. But somebody forgot to invite Loki, god of mischief; he turns the groom into a goat, which flees into the wood. The bride, her mother, and her father all go separate ways into the wood, and each of them meets a humble woodsman (Loki in disguise) who happens to have found a wandering goat. Each of them then finds a different one of the Warriors Three, who each sets off on a different quest in the hope of restoring the goat to normal. Each quest is a decoy, for Loki’s kept the true groom himself. The Warriors must reunite, and challenge Loki in his lair — and hope what each of them learned on their own personal quests will help them overcome the sinister god.

Unfortunately, the working-out of the plot isn’t as effective as the overall structure. The individual victories of the Warriors tend to come easily, and the depiction of their growth as characters is somewhat heavy-handed. The concluding test against Loki seems too easy as well, almost predetermined; and at the end, the story comes down to a literal deus ex machina (meaning, in this case, a thunder god out of the machine). It has to be said that the tale’s sense of humour is a bit forced, too; it strains too much after comic effect, mixing in anachronisms too freely. When it relaxes, allowing playfulness to emerge naturally from the plot and characters, it’s much more effective. 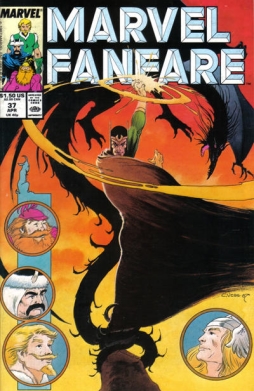 Vess’ art is smoother than in The Raven Banner, though, and covers a wider range, moving easily from comedy to horror. His sense of character and character design is stronger; his sense of page composition and ability to depict kinetic action is surer. The showdown with Loki recalls Walt Disney in the best way.

The Warriors Three Saga keeps a constant fairy-tale feel, and ends on a note of fine poetic justice. There are some nice effects as it shows the same scene from different points of view, and the mythic richness of Asgard is still convincing. Zelenetz apparently described the book as a comic opera; that nicely captures the feel of it.

The Asgardian fantasies of Zelenetz and Vess are good comics and good fantasies. I wish both of them were in print, and more widely known. As it is, Zelenetz is known largely as a footnote in the history of Marvel’s Thor — he was the man who wrote the main Thor title just before Walt Simonson took over the book. He deserves better than that. Hopefully, with Marvel reprinting (it seems) almost everything they own, they’ll get around to The Raven Banner sometime soon.

Thank you for the kind words, Matthew. Excellent article as always.

Matthew — another terrific article. Great to see some love for THE RAVEN BANNER, one of the few really great original graphic novels from that era. And I agree – it’s a shame it’s not still in print.

>The Warriors Three Saga is a sprightly, summery comedy. I think it’s a lesser work,
> but, unlike The Raven Banner, it is in print.

Wow, it took me a while to track down which volume you were talking about. I assume you mean this one?

Thanks for the good words, William and John!

John: Yep, that’s the book I found. Thanks for including the link; I forgot that Marvel had put an unrelated issue of Marvel Spotlight into the book as well, thus making the list of authors even more confusing.