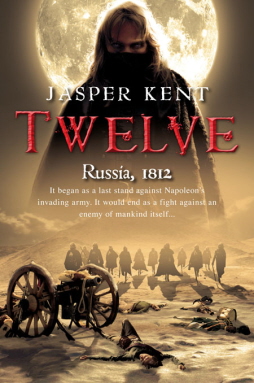 Twelve is set in Russia in the year 1812. While America was fighting a trans-Atlantic war against the British, Napoleon led a Grand Armee of 450,000 soldiers across the Niemen river into Russia. The outnumbered and undertrained Tsarist armies fought a series of retreating actions, and the French successfully occupied Moscow just as winter was setting in.

The novel is narrated by Aleksei Ivanovich Danilov, a soldier already weary from a lifetime of war and marked by the loss of two fingers in a Turkish dungeon. At the time of the French invasion he is assigned to a unit of three other soldiers tasked with undermining the French war effort via espionage and commando raids.

The opening line of chapter 1 introduces their strategy: “Dmitry Fetyukovich said he knew some people.” Dmitry knows, in fact, a group of mercenaries from the Danube river valley who fought with the Russians in an earlier conflict with the Turks. These mercenaries share a common interest with Aleksei and his comrades: They love nothing better than killing Frenchmen, and their efficacy is legendary.

As the mercenaries approach Moscow from the south, Aleksei hears of a series of unusual “plagues” breaking out in small towns along their route, giving him a faint feeling of unease. At last, late at night, twelve men arrive in Moscow under the leadership of a man who introduces himself as Zmyeevich — in Russian, “Son of the Serpent.”

When asked for the names of his twelve men, he momentarily surprised, but introduces them one by one:

These twelve are shabbily dressed, taciturn, and, with the exception of Iuda, all so unremarkable in appearance that Aleksei can barely tell them apart. Iuda is tall, cold-eyed, and has a mane of pale gold hair. These men are given the names of the twelve apostles, but a chill runs down Aleksei’s spine as he realizes that, among them, to be called “Iuda” is an honor. Aleksei dubs them the Oprichniki, after the fanatic monks that served as Ivan the Terrible’s enforcers.

The Oprichniki lay out their principles of operation: They will work in small groups, one Russian to three Oprichniki. They will travel by night and rest by day. Their only mission: to spread terror among the ranks of the Grand Armee.

Aleksei is a man living in moral confusion. He longs to see his wife and young son, but carries on an affair with an enchanting whore named Dominique. He has seen enough war and death to numb his conscience to the horrors of battle. And yet, when he sees the aftermath of the Oprichniki’s nocturnal raids, his stomach is turned. They fight without rifles, leaving men torn apart as if with talons. 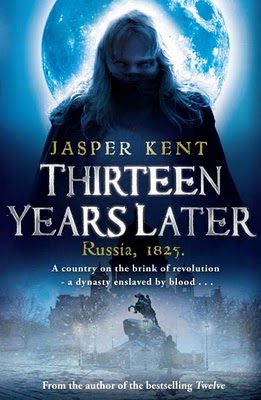 Are there any good stories left to be told about vampires? After reading Twelve, my answer is an unequivocal yes.

If I could pick one word to summarize Twelve‘s strengths, it would be tone. Jasper Kent writes with a subtlety which evokes his themes more effectively than page after page of breathless description. One scene, in which Aleksei follows the French army in its retreat, seeing the corpses of soldiers killed by frostbite before being looted and even cannibalized, is more effective than similar “horrors of war” passages in a dozen other books.

A profound sense of loneliness infuses the novel. Aleksei’s comrades operate independently, and he sees them only at pre-arranged meetings in far-flung locations. His wife, although looming large in his mind, never appears on the page, and his closest relationship among human beings is a whore (whose services are, naturally, much demanded in wartime). For much of the book, Aleksei is simply alone, one man in an urban and rural landscape torn by war on a massive scale.

The Russian winter itself is a haunting, menacing presence throughout the novel. Endless nights and bone-chilling winds form perfect hunting conditions for the vampiric Oprichniki, and when the environment itself brings death to the unprepared, the horror of things that lurk outside the warmth and light of a hearthfire becomes all the more vivid.

I’ve never visited Russia, and if I’m lucky, I can mispronounce, misuse, and otherwise mangle four or five words of Russian (six, if you include vodka). I do, however, greatly enjoy Russian novels, and to my amateur senses, Jasper Kent does a sterling job of capturing the unique “feel” of Russian prose rendered in English. His portrayal of Russian culture, combining Christian faith with deep superstition, provides an interesting counterpoint to vampire stories set in more rationalistic American and British settings. Even Aleksei, by no means a religious man, clings to a simple icon given to him by his more pious wife.

There is a sense throughout the novel that the Oprichniki are not a great physical threat. They are few in number, and despite their great strength, they are highly vulnerable to the usual methods of beheading, staking, and burning. What makes them frightening, and drives Aleksei’s crusade against them, is the degree to which they are a spiritual terror. The French kill for land, for wealth, for conquest. The Oprichniki kill only for the raw delight of cruelty. They are seductive only in their promise of immortality and the savage appeal of their bloodlust. Whatever appeal they have — and Twelve explores the idea — is demonic rather than romantic.

Iuda, in fact, is the exception, in that he is outwardly attractive and relatively articulate, even charming. When Aleksei still believes the Oprichniki to be allies, Iuda is the one he gravitates towards, and later, it is Iuda becomes the face of all that is both worst and most seductive about the cruelty of the Oprichniki, coldly murderous and utterly unapologetic. Iuda is purely what he is, with no hint of angst or doubt. 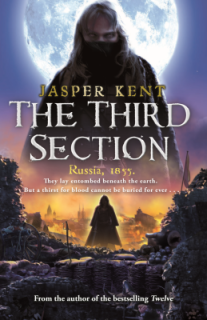 I’d be remiss if I didn’t touch on the book’s action (this is Black Gate, after all!) There is plenty of combat, with vampires and mortals both, but the fights don’t rise above the level of competence until a rousing conclusion set in and around Napoleon’s retreat under bombardment across the half-frozen Niemen River. The action scenes aren’t bad, but they’re not the novel’s strong point, either.

Ultimately, to succeed, a historical novel has to be convincing. And Twelve convinced me to the core. It convinced me that twelve vampires could co-exist with the nightmares of Napoleon’s winter campaign, that the Son of the Serpent could walk among men in an enlightened age of printed books and gunpowder, and that a cold-hearted man could be reawakened to heroism by an invasion of monstrous evil. No mislaid details jarred me out of the action, and Kent’s style fit his story.

I should also mention that final chapters of the novel have a surprising twist on vampirism that I’ve honestly never seen before. Like the best twists, it seems inevitable in hindsight, and adds a fresh layer of richness to everything that came before. I’d like to goad some people into reading Twelve just so I can discuss it with them.

In closing, I should note that, while Twelve is a perfect stand-alone, Kent has already released a sequel (Thirteen Years Later, set during the Decembrist uprising) and plans three more books to complete his Danilov Quintet, starting with The Third Section this October. I look forward to devouring all of them.

could be great a book covering the events of the russian civil war, the cossack warlords of Siberia, the foreign intervention, the czech legion, the fate of the tsar…

[…] Stiennon, just Sean will do nicely.  You might already have noticed my name attached to a review of Jasper Kent’s […]

[…] of my reading lately has been historical fantasy rather than full secondary world fantasy (see my gushing review of Twelve): Because the authors of these novels have usually made at least some effort to truly understand an […]