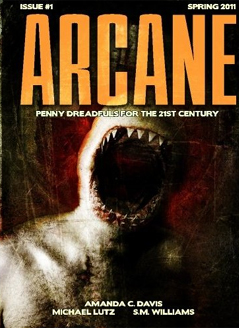 ARCANE is a slick new magazine from Cold Fusion Media and publisher Sandy Petersen. The first issue just dropped and it’s quite a breath of fresh air for horror fans — or should that be a fetid, graveyard breath? Anyway, this new quarterly publication is both an e-mag AND a print mag—it  plays no favorites in the “print vs. digital” debate. According to its manifesto ARCANE will be publishing “weird horror, the supernatural, and the fantastic. ” It aims to leave readers highly entertained and slightly disturbed, like the best weird fiction always does.

Copies are now available on Amazon and the mag’s official site: www.arcanemagazine.com.

Here’s an interview with ARCANE Editor Nathan Shumate, who gives BG the inside track on all the weirdness. Find out where ARCANE came from and where it’s going, as well as what kinds of stories the editor is looking to find.

An Interview With Nathan Shumate

Conducted and Transcribed by John R. Fultz, May 2011

BG: We keep hearing that the “market’s down” — yeah, what else is new? But the market’s also up: E-books are outselling print books on Amazon, millions of dollars spent on books print AND digital. You obviously saw a way to capitalize on both online and print markets when you launched the beast that is ARCANE: PENNY DREADFULS FOR THE 21ST CENTURY. But the question remains: Why start a magazine? What drove you to the mad proposition of launching a fantastic new fiction venue?

ARCANE (Shumate): I originally started the magazine ARKHAM TALES in late 2008; I had always wanted to edit a “weird fiction” magazine, and I realized there was no time like the present.  Actually, any time would have been better, as late 2008 was right when the U.S. economy started circling the bowl.  The business model I had was a free PDF magazine, paid for with ads, but the ad sales never panned out, and five issues in, I had exhausted the funds on hand to keep the magazine afloat.  The magazine was subsequently bought by Leucrota Press, which retained me as editor, but the format stayed the same — even as I realized that a Kindle format, which precluded the inclusion of ads, would have a much larger potential marketshare than a PDF format. Leucrota and I didn’t see eye to eye on that, and I left when the eighth issue was completed, which is right before Leucrota declared bankruptcy.  (I swear I had nothing to do with that.)

I had the opportunity to buy back the ARKHAM TALES intellectual property, but I decided to make a clean break rather than spend months deciding which contractual commitments I’d be taking on, and instead formed ARCANE (the name is intentionally reminiscent of that of the former magazine) with Lovecraftian game guru Sandy Petersen, with whom I’ve been acquainted for a few years.

BG: ARCANE crosses the line between fantasy,  horror, sci-fi, and more horror. Is genre ultimately meaningless when you find a Great Story to publish?

ARCANE (Shumate) : I  think that everything we publish in ARCANE, whether sci-fi, fantasy, or what have you, has cross-pollinated with horror; there is a certain darkness, a certain sense of brooding disquiet, that characterizes our magazine more than out-and-out horror.

BG: There’s obviously a classic Weird Fiction vibe here, but so much more. What authors and publications are your biggest influences? (I’m sensing some classic WEIRD TALES influence?)

ARCANE (Shumate) : You’re right that there’s a WEIRD TALES influence; my general vision is to wonder what Lovecraft, Howard, Smith, etc., would be writing today.  I’m not so much interested in seeing outright pastiches of their classic work; instead, I want to see that “weird fiction” sensibility transplanted into today’s storytelling techniques.

BG: Do you see ARCANE as primarily a horror magazine?

ARCANE (Shumate) : Yes, though our scope is both broader and narrower than horror in general.  I love Lovecraft’s definition of the “weird tale” which uses disquiet and foreboding instead of screams and (these days) gore; it’s quieter and more subtle than the bleeding edge.  I’d much rather see a story which uses foreshadowing and dread than one that hits all the bases in one of the current standard genres.

BG: Your introduction to issue #1 (Spring 2011) does a great job setting the “mission statement” of the magazine. What are your goals in the next few years in terms of building the mag?

ARCANE (Shumate) : More of the same, really — building an audience who know that they can depend on ARCANE to deliver high-quality entertainment that leaves an aftertaste of disquiet.

ARCANE (Shumate) : Once ARCANE has a firm footing in terms of regular customers to keep it afloat, I’d love to move it to bimonthly.

BG: In terms of market, are you reaching more print or e-customers right now? Or is it too early to tell?

ARCANE (Shumate) : Currently it’s about two-third e-reader customers, and I expect that fraction to grow as e-readers become a part of more and more people’s reading experience.

BG: Will you be promoting ARCANE at any of the big cons this season?

ARCANE (Shumate) : I will be at WorldCon in Reno this August, but more as a simple attendee and an exhibitor.  I will be putting on more promotion at World Horror in Salt Lake City next spring, as well as at CONduit, SLC’s regular convention at the end of May.

I like that description of what you want as what the old Weird Tales masters would be doing today.

Do you have plans to add book reviews? An anthology I coedited will be out later this year, and many of the stories lean toward horror of the weird sort.