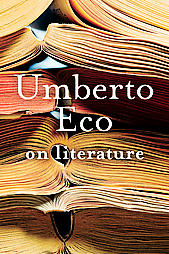 I was reading Umberto Eco’s book On Literature the other day and his essay entitled “Intertextual Irony and Levels of Reading” caught my attention, particularly in light of Matthew’s intriguing series of essays on Tolkien. (I haven’t commented upon them yet because they are sufficiently deep to require a second reading before opining, Matt, so my apologies for the tardiness.)

Hence this post. Being a fan of double-coding, a few years ago I was somewhat at a loss for how to go about writing the third novel in a religious fantasy series. Since I’d already broken most of the rules of religious fiction to such an extent that Pocket Books seriously considered releasing the second book under the category “religious horror”, I started writing a vampire novel that turned out to have absolutely no connection to the previous two books by the fifth chapter and terrified the editor. (I didn’t see what the problem was, I mean, doesn’t it make perfect sense that a wealthy and immortal vampire would want to own a chain of blood banks and abortion clinics?) But since I couldn’t figure out how to connect the vampire story to the previous high school characters in a way that either the editor or the readers would likely accept – and you can probably imagine how I thought would make the most sense – I gave it up as a false start and started over.

While some writers profitably enjoy writing the same book over and over again, I am unfortunately not one of them. I wish I could do it, but I simply get too bored. So, I thought I would attempt to go the literary route, at least in the structural sense, and produce a fantasy novel that was double-coded from start to finish. It turned out to work out rather nicely, with just one problem. I managed to encrypt the double-coding to such an extent that the deeper layer has remained completely unrecognized to this day. But, since I’m planning to release ebook versions of the three novels in June, I thought it wouldn’t be a bad time to explain the deeper layer of the novel.

On the more superficial level, The Wrath of Angels is about a demonic plot by Diavelina, a Princess of Hell, to overthrow the usurper who is ruling over Albion in the absence of the rebel angel Oberon, who rejected both Heaven and Hell in setting up his Kingdom of Faery. The Divine have uncharacteristically decided to interfere in these internecine Fallen politics, as Diavelina has managed to gain control over most of Europe and happens to be at least partially responsible for the Holocaust, among other great evils. This is the level on which readers have read the book, and it would appear that they have generally enjoyed it. However, on the deeper level, the book is actually an economic story, telling the history of of the European monetary union and the attempt of the European elite financial interests to convince the British government to abandon the pound sterling in favor of the Euro. In light of recent events it might have been desirable to wait until the inevitable breakup of the Euro in order to truly complete the story, but then, one could also argue that the present meltdown of the PIGS would make writing a fourth book considerably easier.

What I learned in the process is that while it is entertaining to utilize multiple languages to conceal what might otherwise be reasonably clear to the reader, it is necessary to first clearly frame the context if one is to give the reader any chance to follow the suggestions. One need not stoop to the level of JK Rowling’s crude Latin spells to realize that while “Marrone” translates as “Brown”, the logical leap to Gordon Brown, the former Chancellor of the Exchequer, is probably not going to happen when there is no overt contextual hint concerning the matter at hand. Of course, puzzles are always obvious to the puzzle creator; I thought “Prodius Marrone” bordered on the Rowlingesque given the “obvious” reference to Romano Prodi, the former Italian prime minister who was President of the European Commission and the political face of the Euro at the time of its introduction. In retrospect, I should have known that currency shenanigans and the political battles that underlie them are not at the forefront of most people’s minds, especially not when they are reading about demons tormenting hapless vampires and magical swords hidden under Loch Ness.

However, as I subsequently learned in the review of Summa Elvetica in Black Gate #14, it is probably best to err on the side of clarity rather than cleverness. If I may offer a brief, and belated correction to the review, the Latin at the beginning of each chapter is not, in fact, a quoted argument from the Summa Theologica of Thomas Aquinas, but is instead an argument in the Aquinas format of my own device that contemplates the question that so many have asked themselves in the deep of the night: quod aelvi habeant animae naturaliter sibi unita.

No worries on the commenting delay, Theo; I tend to prefer letting things sit a while to think about them, myself.

On another note, you mentioned not being interested in rewriting the same book; in some ways, you may be lucky. I remember hearing that somebody accused Mordecai Richler of just rewriting the same book over and over; Richler apparently answered “Yes, and I’m going to keep writing it until I get it right.” Which on the one hand is admirable, in that he was trying to get closer to some purity of vision. On the other hand, I always felt it was sad, in that he couldn’t get the one story told and move on; he couldn’t actually realise that vision in some way he could accept.