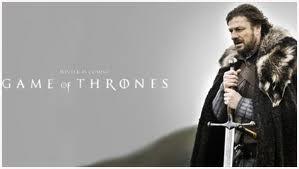 Warning: this is a post that includes various spoilers concerning both the novel and the HBO series of George R.R. Martin’s A Game of Thrones, as well as discussing adult themes and the abuse of animals. Proceed at one’s own risk.

The fifth episode of Game of Thrones, entitled “The Wolf and the Lion” was as revelatory as it was disturbingly violent. The episode was a good one and it conclusively settled a question that was the object of occasional discussion on the Internet over the past few years concerning the nature of the relationship between Loras, the Knight of Flowers, and Lord Renly Baratheon. While a sufficiently attentive reading of the books makes it eminently clear that both Loras and Renly were as definitively queer as the Folsom Street Fair, I’m not sure the intimate portrayal of them as an on-screen couple on the television series is as likely to be as effective as the more subtle portrayal of their relationship in the books. First, however, it’s worth pointing out that despite the obliviousness of Sansa Stark and many readers, there can be absolutely no question that the characters were not conventionally sexually oriented from the start; HBO cannot possibly be blamed for attempting to gay up the storyline as some disenchanted readers have suggested. Consider the following:

““In your bed she’s like to die that way.” Stannis to his brother Renly on the virginity of his wife Margaery.

“And it relieved him (Loras’s father) of the difficult task of trying to find lands and a bride for a third son, never easy, and doubly difficult in Ser Loras’s case.” Lord Baelish to Sansa Stark.

“Loras is valiant and handsome and we all love him dearly…but your Imp will make a better husband.” Loras’s brother Galen to Sansa.

“Now sheathe your bloody sword, or I’ll take it from you and shove it up some place even Renly never found.” Jaime Lannister to Ser Loras.

And this is all setting aside the rather obvious suggestions presented by terms such as “the Knight of Pansies” and “the Rainbow Guard”. While HBO’s decision to make the quasi-royal couple’s relationship overt to the viewer is perfectly in keeping with its straightforward portrayals of everything from Dothraki marriage ceremonies to Ser Gregor’s brutal slaying of his horse at the tournament, it is strange that they should remain so delicate in the portrayal of both the nature of the relationship as well as its enjoyment. With regards to the latter, it would appear that it is the homosexuals of Westeros who are the only ones who do not utilize, shall we say, the Dothraki-style position, while the sweet, dewy-eyed portrayal of the saintly relationship between Loras and Renly appears downright insipid in contrast with the illicit intensity of Jamie and Cersei Lannister, the exhausted hatred of Cersei and King Robert, the affectionate stoicism of Lord and Lady Stark, or even the easy familiarity seen between Littlefinger and his small army of whores.

Show, don’t tell, is the well-justified aphorism of the writer, but if what is going to be shown is more reminiscent of Twilight-style teen romance than a deeply passionate, secretive relationship between a martial virtuoso and one of the powers of the realm, it might have been preferable to have kept it in the fantasy medieval equivalent of the closet. Either way, Renly and Loras appear to be the first casting missteps of the series; Renly hasn’t a modicum of Baelish’s charm, and while Loras is sufficiently beautiful for the part, he doesn’t look as if he could even lift a broadsword with those scrawny little arms, let alone wield one with any skill. Of course, the most shocking aspect of the episode had nothing to do with either Loras or Renly, as it was a toss-up between The Mountain That Rides sending a thousand PETA members to the phones in protest of his robust exhibition of anti-equinitarianism and the Lysa Arryn’s rather quixotic approach to children’s nutrition.

If the most shocking events of the episode was not Loras and Renly’s sex scene, then why did you focus on it before giving a single sentence to Gregor and Lysa’s antics?

Because the post is not primarily concerned about what was shocking in the episode, but rather with the way in which a long-standing question about the books was settled. There is nothing shocking about a homosexual relationship on an HBO show, (indeed, a failure to portray one would be more shocking), but the blatancy of the portrayal was unexpected because it appeared to be somewhat of a departure from the text. Especially the way in which Ser Loras was portrayed as the more dominant party.