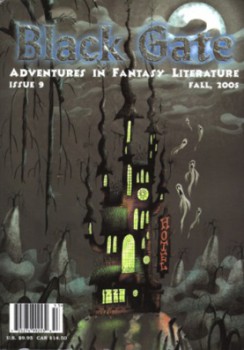 Black Gate lost one of its own last month with the passing of noted short story writer Larry Tritten.

Larry began his lengthy career in 1968 with the story “West is West,” in Worlds of If magazine. He appeared in dozens of magazines such as The New Yorker, Fantasy and Science Fiction, Asimov’s, Twilight Zone, and many others. In 2005 his story “It’s a Wonderful Con,” featuring a man who cons Santa Claus out of $200, appeared in Black Gate 9.

As much as I enjoyed his fiction, I was even more charmed with Larry’s letters, which related fascinating details of a writing life. I got his permission to include a few of those anecdotes in a sidebar that accompanied the story, and got more mail about that than about his fiction. The sidebar read, in part:

I was in the Mammoth Book of Future Cops a while back, with a Chandler parody set in future San Francisco, and not long ago I was the lone male (heterosexual) writer in the British anthology Va-Va-Voom – Red Hot Lesbian Erotica.  Just me and 32 Lesbian writers. I try to cover all territories.  Had a piece in Minnesota Parent a while back, though I am not a parent and have never been to Minnesota (except to change planes).  Had one in Range (but am not a cattle grower).  And so on.

The count is about 1500 pieces since the sixties, so I’ve had time to get around.  I’m probably one of the few writers to have published in both Hustler and The New Yorker.  I’m often astonishing younger writers with memories of the those early days.  For example, in December 1978 I made four or five sales (one to The New Yorker for, I think, about $1250), and the money added up to close to $5,000.  I was living in an apartment where the rent was $185 per month.  Rent for two years!  Hard to believe such times ever existed.  Today my rent and bills are about ten times what they were then, and just the next month’s rent always looms like the sword of Damocles.

He was a smart, talented, and funny writer. He was also the sort of professional writer that seems to be disappearing, the kind of professional who never met a market he didn’t like and had the versatility to tailor almost any work to meet the needs of any market.

He contributed a lot of funny stuff to F&SF over the years.

Larry died in April, 2011. A more complete obituary appears in the May issue of Locus.

[…] enough to have to write only two for Black Gate contributors: prolific short story writer Larry Tritten, and Euan Harvey, taken from us too young. So it is with a heavy heart that I report the death of […]