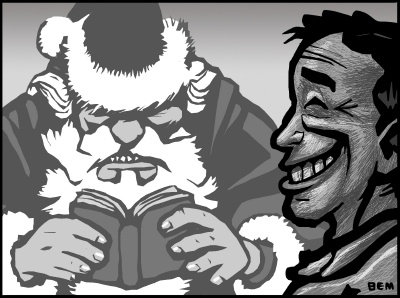 The blue neon cocktail glass caught Eddie’s eye from the far end of the block and as he drew closer he saw that the neon script beside it spelled out the name of the bar: FLORIAN’S. Its facade was narrow and inconspicuous, sandwiched in between a videotape rental store and an art gallery whose window exhibited an oil painting of a wintry metropolitan street scene in Paris. It was just the right place, Eddie was sure, for his game. It was a downtown bar and would have a clientele of people who for the most part didn’t know each other. His little game would not play well in the kind of neighborhood bar where there was a virtually familial atmosphere.

Eddie went into the bar and stood for a moment inside the doorway, checking out the darkened interior. There was a young couple at one of the small tables in the back, with two big Macy’s shopping bags on the floor beside them — Christmas shoppers having braved the crowds and earned their pink drinks in tall paper-parasol-topped glasses; two solitary drinkers were hunched over beers at the near end of the bar; and, down at the far end, Santa Claus was drinking what looked to Eddie like an Irish coffee.

Santa Claus! A department store or Salvation Army Santa Claus taking a break, Eddie assumed. In any case, his immediate impression was that this was the most authentic Santa Claus he’d ever seen this side of a movie. He reminded Eddie, in fact, of Edmund Gwenn in the original Miracle on 34th Street. He also reminded Eddie of the classic Coca Cola Santa Claus — huge, robust-looking, with a full beard, and wearing a costume whose red velvet and snow white fur looked like a designer outfit, expensive and well-tailored.

Eddie went to the bar stool just one away from the Santa Claus, sat down, and asked the bartender for a Stinger. When it came, he lifted the glass, gestured slightly toward the Santa, and said companionably, “Here’s looking at you, Mr. Kringle.”

The man in the Santa Claus costume looked at Eddie, meeting his eyes, and in an equally friendly tone said, “Thank you. Apparently you know my name. But I don’t know yours.”

“Eddie Bascomb,” Eddie said. He extended his hand and was slightly startled when it was encompassed momentarily in a huge hand whose warmth seemed to communicate a sense of vitality, assurance, and well-being. Eddie smiled and said, “Of course everybody knows your name.”

“Oh, not everybody,” the Santa said. “At Valle Esmeralda on the Tambo, one of the Amazon’s main stems, I’m all but unknown. And communism made me persona non grata at any number of atheist households.”

Eddie chuckled. “Well, I believe in you, Kris,” he said. “Because you always brought me everything I asked for. Always.” It was true, too. Eddie’s parents had been prosperous, his childhood privileged. He had always gotten whatever he wanted. And he had inherited enough money to make his life more than comfortable. Which was why his little game was so mean-spirited. He didn’t need the money. Yet he enjoyed taking it, there was a high in suckering people. And he was highly enthusiastic about the prospect of adding the legendary saint to his list of victims.

“Apparently you were one of the good little boys,” the Santa said. “The kind who keep me busy. And that pleases me, although — ” He met Eddie’s gaze and tapped the rim of his glass thoughtfully. “I have been told by an elf or two after a hard day’s work that they wished there were a few more bad boys.” The Santa winked at Eddie and finished his drink.

“Can I buy you another Irish coffee?” Eddie asked.

The Santa looked at his empty glass, then glanced soberly at Eddie. “Oh, this wasn’t an Irish coffee! I rarely touch alcohol, except for an occasional nip of Peppermint Schnapps at home when it’s below zero weather.”

“Whatever it was, have another on me,” Eddie said.

“Black coffee and whipped cream,” the Santa said, then beckoned to the bartender with his glass. “Thank you, Eddie.”

Now, very casually, Eddie brought out the paperback copy of Leonard Maltin’s Movie & Video Guide and put it on the bar, opening it, turning arbitrarily to a page in the middle of the book and pretending to become quickly engrossed in reading.

The Santa said, after a few moments, “Are you a movie fan, Eddie?”

Eddie looked up and shook his head. “I wouldn’t say a fan,” he said. “But my girlfriend is a movie nut and I’m trying to get more in sync with her tastes.”

“What was the last movie you saw?”

“In fact we rented the remake of that Christmas movie the other day — Miracle on 43rd Street.”

“Thirty-fourth Street,” the Santa corrected him.

Eddie thought about it for a moment. “Nah, I think it’s 43rd Street,” he said, enjoying himself enormously.

“The one with Richard Attenborough doing an impression of me?”

“The British actor, yeah. The original had Maureen O’Hara and John Wayne.” Eddie started to return his attention to the book, then said as an afterthought, “I saw Attenborough the other night in Flight of the Phoenix. My second favorite James Stewart movie.”

The Santa nodded slightly as another coffee was set before him, regarding the whipped cream with a pleased expression. “Second favorite?” he asked Eddie.

The complete version of “It’s A Wonderful Con” appears in Black Gate 9.

One thought on “Fiction Excerpt: “It’s a Wonderful Con””