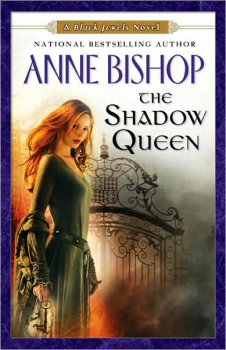 Theran’s war-camp upbringing works against him. He is uneducated in the social conventions that keep the Blood from killing one another, and unsophisticated in his understanding of his own land’s needs. Theran makes a great many mistakes before he begins to learn, not least of which is that he does not know how to value the Queen who agrees to take on the challenge of Dena Nehele. Cassidy is a Queen rejected by her first court, not beautiful, not powerful, interested in growing things and the landen. Theran’s crushing disappointment blinds him to the fact that Cassidy may be exactly what his land needs. But Cassidy has a core of iron she has never really had a chance to test, and if she can’t convince Theran, she’ll go around him and work with the people of Dena Nehele directly. One by one she wins over her subjects, until at the last even Theran can see that Cassidy is exactly the right Queen for Dena Nehele.

Bitter and broken and somehow still going on, waiting for a slow and painful healing. This seems to be the theme of The Shadow Queen, echoed both in the greater landscape of Dena Nehele and in the individual characters dealing with a variety of hurts, with the hurts to the mind and soul being the greatest and most painful. Bishop has a talent for skillful character portrayals – perhaps too much so in this case. I found the evocation of Theran’s callow and small-minded nature to be so effective that I struggled to identify with him. Of Cassidy and Theran’s individual and often conflicting struggles, I found Theran’s to be the more intriguing and compelling of the two; yet I disliked the character enough that when his epiphany occurred in the last few pages I felt little satisfaction. For me, it was too much time in the mind of a character who ultimately was marginalized and dismissed by nearly every other character in the book – even those that were fond of him. At the beginning of the book, I waited to see Theran to grow into the hero, but he just wasn’t capable. At the end, I too wanted to dismiss him, and felt somewhat cheated at having spent as much time reading about him as I had.

The Shadow Queen is well written, with an interesting perspective on the stories of those who are neither superheroes nor supervillains, but somewhere in between. But a fair amount of time is spent on developing a character that is ultimately not particularly likable or respectable, and some readers may find this off-putting. Fans of the Black Jewels series will probably enjoy the book despite Theran, but I wouldn’t recommend it as an introduction to the series. Start with the trilogy that begins it: Daughter of the Blood, Heir to the Shadows, and Queen of the Darkness. By the time you get to The Shadow Queen, you’ll be well and truly hooked.

I really love the cover of this book… I wonder who did it?