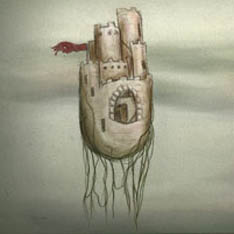 I had a quiet day at work, but blimey! I got a lot done!

While I hauled boxes, processed books, priced, et cetera — so long as customers weren’t in the bookstore — I listened to four stories right off of Podcastle’s website, starting with two by Tim Pratt.

The first one was called “Cup and Table”, which was (and here I quote the man who recommended it to me), “so kick-ass and so much fun and kind of unbelievable how much is crammed into that story.” It was very time-bendy (timey-wimey, as the denizens of Doctor Who might say), its edginess and moroseness always tinged with the tongue-in-cheek. And the end? Surprised a huge grin outta me. I very much recommend it. 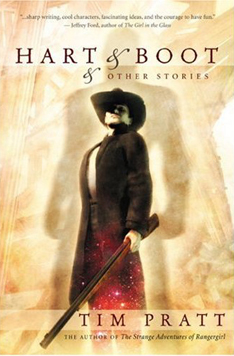 The second, “Hart and Boot”, was less structurally complex but even more to my taste. It was like something my buddy Patty might write after we watched a few too many episodes of Deadwood and we were in a gun-slinging, hip-swinging mood. Its protagonist, Pearl Hart, made me want to put on a pair of cowboy boots and shoot my way across the west. (‘Specially if naked men sort of slurped up from the mud every time I thought on ’em hard enough. Yummy.)

What I liked best was that even with Pearl’s foul mouth, her conniving mind, her selfishness and brazenness and remorseless use of people (especially, perhaps, of the one human she actually loved), she still had moments of rough tenderness that just… got me. Boot was great too, but there’s only so much you can do with a character that tired all the time.

My whole Prattathon started out as an exchange. I’d recommended a bunch of James Enge stuff to writer and editor Dave Thompson (’cause that’s how I roll, yo), which he actually went and read, and then, since sharing obsessions with awesome authors is totally rad, Dave recommended a monkey’s ton of the Prattman to me. With links!!!

And here I am, recommending them to YOU! 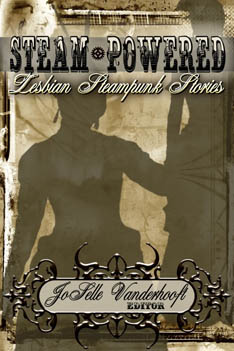 After the Pratt, I took a nice long swig of El-Mohtar.

I’d been meaning to listen to the audio of her lovely story “To Follow The Waves” ever since it came out at Podcastle in, what, January? Marguerite Croft narrates, and whatever it is in a voice that I like, that I want to keep listening to — she had it. My ear got hooked. I’d love to hear her read anything. Say, the phone book. “To Follow the Waves” can be found in a print and e-book anthology called SteamPowered: Lesbian Steampunk Stories, edited by JoSelle Vanderhooft and published by Torquere Press. El-Mohtar is but one of a mighty array of authors gracing those pages.

Then, after all these wonders, I also listened to my story, “Household Spirits,” which went up today on Podcastle.

This is the first story I’ve ever had up there, and I was a trifle nervous about it. Not least because my own thoughts toward the story pretty much amount to: “Well, girl, you did the best you could at the time, but next time, do better!”

Artsy-fartsy soul-searching aside, I really liked what I heard! The story is epistolary in structure, being a series of letters that a father and son striking out for the frontier send back home. The actors, Bob Eccles and Brian Lieberman, playing Hal and Jessamee Fletcher respectively, each have pleasant, distinct voices, speaking with a light twang that flavored the whole text with that Other Time-Other Placeness. I’m the only one I’ve heard read this story out loud, and of all the things I can do with my voice, going all gritty baritone frontiersman is not one of them. (Yet! But I bet voice actor Barbara Rosenblat could do it. Maybe if I try really hard, and after a few decades of gin and cigars…)

All kidding aside, to hear real men voicing my male characters was not something I’d gotten to experience before in FictionLand! Hurray! I mean, I love reading my stuff aloud; it’s often written to be read aloud, but it can get lonesome. When another person reads something you’ve written and does it well? There’s nothing quite like it in the world.

In other words, Podcastle rocks. All the fantasy you could possibly want, once a week, in your ear. Perfect for a morning commute, or a bout of dishwashing, or an endless pile of boxes to sort. Double-dog-dare-you to try it!

Podcastle is near and dear to my heart–especially it’s editor, Dave Thompson. I had made it a habit of listening while making dinner at night, and fell off the podcastle wagon when the kids came home for winter break. I’m going to have to get into the habit again! Thanks for reminding me, love!

What a good idea! It’s just the length of a dinner-making, isn’t it? Perfect! Jump back on the wagon. I’m always the last one on anyway, and it’ll be good to chum up with one of the more seasoned riders. 🙂