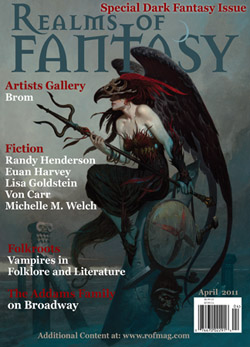 The April issue (issue 99) of Realms of Fantasy is now on sale.

We last reported on Realms of Fantasy with issue their February issue.

Rich Horton reviewed this issue in the May Locus, saying:

The April issue of Realms of Fantasy is a special Dark Fantasy issue… It’s a very strong issue, for whatever reason. Every story is good, and the definition of ‘‘dark’’ is loose enough to include a comic story, ‘‘The Strange Case of Madeline H. Marsh (Aged 14 ¼)’’ by Von Carr, about an 8th grade girl who needs to deal with Lovecraftian Dark Gods in her basement. Euan Harvey’s ‘‘By Shackle and Lash’’ is a strong Persian-flavored story about a couple of soldiers whose cowardice gets them assigned to cleaning duty in a prison… The best story here is ‘‘Little Vampires’’ by Lisa Goldstein, which beautifully dovetails three stories: a Halloween tale about a girl visiting a sinister house, a darker story told by a Hungarian émigré about her escape from the Nazis and its cost, and the framing tale of an elderly mother telling these stories to her daughter.

My story’s sword and sorcery, and the rest I’m sure will be good. Waiting for my copy at the moment.

Thank for the shout-out, John. One small correction if I may: this is actually issue 99. The June issue will be # 100 (woo hoo!)

Thanks for the correction, Doug. The original post said 98, but I updated it to 99.