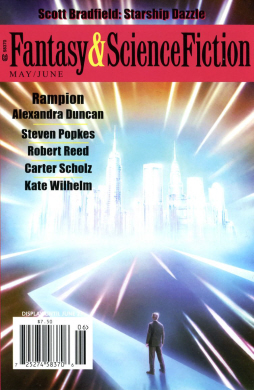 It’s pretty rare for us to have a family reunion in F&SF, but this issue has a piece about reuniting with one of our founding editors. (Our next issue will actually have a story starring another one of our editors.) There’s a lot of music in this issue, several strange forms of life, and a talking dog. Another can’t miss issue, in other words.

The Special Feature this issue is “Jesse Francis McComas: The Traveller Returns” by Maria E. Alonzo. The issue also contains an editorial by Gordon Van Gelder, book columns by Charles de Lint and Chris Moriarty, “Plumage From Pegasus: Building a Readership” by Paul Di Filippo, a film column by Kathi Maio, and a Curiosities column by the late F. Gwynplaine MacIntyre.

F&SF is published six times a year; issues are a generous 258 pages.  It is the longest-running professional fantasy magazine in the country, and has been published continuously since 1949. It is a great way to sample some of the fast-rising new names in fantasy.

The cover price is $7.50; one year-subscriptions are a bargain at $34.97, and include the giant October/November anniversary issue. You can order subscriptions and browse their blog at www.sfsite.com/fsf/.

The cover this issue is by Tomislav Tikulin. We covered the March/April issue here.

[…] F&SF is edited by Gordon van Gelder. The cover this issue is by Maurizio Manzieri. We covered the May/June issue here. […]