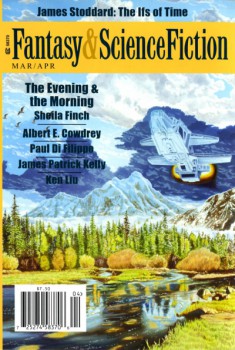 Click on the image at left for a full-sized version of the cool cover art by Kent Bash, illustrating Sheila Finch’s novella “The Evening and the Morning.”

F&SF is published six times a year; issues are a generous 258 pages.  It is the longest-running professional fantasy magazine in the country, and has been published continuously since 1949. It is a great way to sample some of the fast-rising new names in fantasy.

The cover price is $7.50; one year-subscriptions are a bargain at $34.97, and include the giant October/November anniversary issue. You can order subscriptions and browse their blog at www.sfsite.com/fsf/.

We covered the Jan/Feb issue of F&SF here.

[…] The cover this issue is by Tomislav Tikulin. We covered the March/April issue here. […]