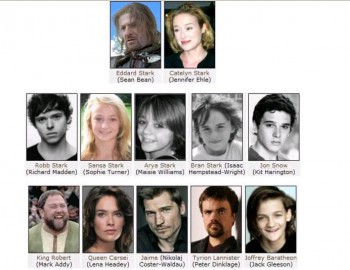 I very seldom approve of book-to-film translations. I still absolutely refuse to watch Disney’s animated devastation of Lloyd Alexander’s The Black Cauldron or the Americanised abomination that attempted to pass itself off as the cinematic version of Susan Cooper’s The Dark is Rising.

Despite my skepticism, however, I thought the first installation of Game of Thrones was very good. Apparently I was not the only one to think so, since HBO has already decided to renew AGOT for a second season thanks to the 4.2 million viewers who watched the premiere. This is good news, as the series promises to be the most successful cinematic adaptation of a fantasy novel since Peter Jackson filmed The Lord of the Rings.

Now, it would have been hard for the producers to go seriously wrong so long as they stayed faithful to the source material – one of these days Hollywood is going to figure out that having their cliche factories “improve” upon a much-loved literary tale is actually counterproductive – but the casting is one crucial component that can ruin even a perfectly faithful adaptation. So, here’s my take on what has so far turned out to be an unusually good cast.

WARNING: MAJOR SPOILERS AHEAD Do not read further if you have not read or seen AGOT. 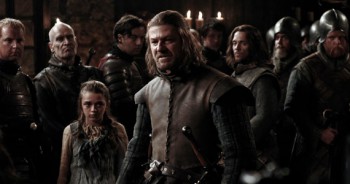 Ned Stark: The Lord of Winterfell is excellent. Sean Bean is actually more convincing as Ned Stark than he was as Boromir, as his grim demeanor is made more compelling by his determined willingness to do the needful.

The only thing I found a little strange was taken right out of the book. Considering that he is constantly warning everyone that “Winter is coming”, why is he so quick to dismiss the news of the White Walkers given by the deserter from the Wall? Shouldn’t he be the first to take the news seriously?

But he comes across as a good man who wants to do the right thing, which is both his strength and his weakness.

King Robert Baratheon: He was older and less crudely attractive than I’d expected him to be, but the man played the role quite well and won me over. Fat and boisterous, it’s not at all hard to see why his friends both love and despair of him, or why his haughty queen finds him so unbearable.

Queen Cersei Lannister: It turns out Lena Headey is much prettier as a blonde than a brunette.

I didn’t think the ex-Sarah Conner and Spartan queen of the 300 would suit the role of the golden lioness of Lannister at all, but she was so good that I found myself thinking that she would have made a much better Galadriel than Cate Blanchett.

I particularly liked the scene where she coldly approves of Sansa Stark and invites her to Kings Landing. Her decision to play Cersei as cold rather than bitchy is interesting, and I’m quite curious to see how Cersei evolves as the strain on her continues to grow.

Jaime Lannister: I was very pleased with the character of Jaime, as he was more manly and convincingly martial than I’d been expecting. The scene where he brings the Imp’s whores to him was an excellent demonstration of his generally positive relationship with his brother.

The only thing lacking is that there is significantly less incestuous smoldering between him and his twin than the book tends to lead one to have expected; while one can see why Cersei might prefer him to her fat husband, one doesn’t detect any real feeling of a damn-all-the-consequences forbidden love of the sort that caused Jaime to shove Brandon Stark out the window.

Tyrion Lannister: He was excellent. Purists may rightly complain that the Imp is supposed to be facially disfigured, but this is televised drama, not history. Considering how often Tyrion is in bed with a whore, it would have probably been too jarring for many viewers to have a downright ugly dwarf sporting about naked.

Frankly, we were probably fortunate that they cast an actual dwarf, however handsome and mellifluous of voice he might be. I can’t imagine that there weren’t HBO executives repeatedly asking if it was really necessary to hire a dwarf when Zac Effron would be more appealing to younger female viewers.

Also, Tyrion is supposed to be unexpectedly charismatic and dry-witted as well as disfigured, and the actor nailed those two more important aspects to a T.

Lady Caitlyn Stark: She was low key, but good. I think the producers were wise to cast an older, less attractive woman than they might have; she is, after all, supposed to be the mother of several young men old enough to fight. There are no hints of the wistful aspect of her past betrothal to Ned’s brother, but then, there isn’t room for everything in an adaptation. Also, the actress has enough gravitas that one has no doubt that she will be able to handle the darker role that she plays later in the books.

Daenerys and Viserys Targaryen: Hard to say. She was a bit soft and squatty and wide-eyed for my liking, but then, she’s supposed to be somewhat of a helpless ingenue in the beginning. She didn’t seem to be afraid of her brother the way she is in the book, but then, he comes off as more of a bitchy little whiner than is readily apparent at first in the book.

Viserys looked more the part than his sister did, but didn’t really manage to pull off any sense of menace. When he warns her about “waking the Dragon”, it comes off more as if he’s been having a Lannister-style relationship and is referring to a certain body part than threatening her with a beating.

It will be interesting to see if the actress can convincingly demonstrate the hardening of her character that occurs as time goes on. I’m also wondering what happened to Tamzin Merchant, the woman who was originally cast as Danaerys but was subsequently replaced by Emilia Clark. It may simply be that Merchant is too old for the part, but I tend to agree with Martin’s initial take that she appeared well-suited for the role. On the other hand, the producers do seem to know what they’re doing.

Khal Drogo: Excellent. Better than I had imagined. I thought the Dothraki themselves were a little lame, in that there were a lot less of them than I expected and they appeared to be of many different races rather than one of their own. The wedding was much less shocking than I believe it was intended to be, it reminded me more of Duran Duran’s Wild Boys video than an orgiastic primitive rite. Still, the way in which Drogo sat there being impassively bored at his wedding until he suddenly perks up when the fighting starts was good, as was the way he calmly, but not cruelly, ignores his new wife’s tears and bends her over on their wedding night.

John Snow: I thought he was the weakest link thus far. He looks fairly nondescript and doesn’t seem to merit the regard that his half-brothers and half-sisters show him in the book. I would have preferred to see less of Arya doing the strong independent girl thing with the bow and more of John’s rejection by Lady Stark.

All in all, the casting was very good and is likely one of the reasons that A Game of Thrones was so well-received. Fans of the novels can be relatively assured that the HBO series is in good and competent hands.

I think you should mention in the first paragraph that there are major spoilers ahead. A lot of people will be waiting for the DVD release and they may not (unfortunately for them!) have read the books yet…

Good point, will do.

Incidentally, after the airing of the premiere, HBO has renewed the series for a second season.

I had trouble picturing Mark Addy as Baratheon. I thought he acted the part well, but I couldn’t picture him as having once been a hulking warrior-king wielding a warhammer.

They casted Joffrey perfectly. You just hate his face. I don’t know how else to describe it.

I agree that the series downplayed John Snow. They cut out many of the small but vital scenes that seemed to endear the reader to him.

Correction – endeared him to the reader.