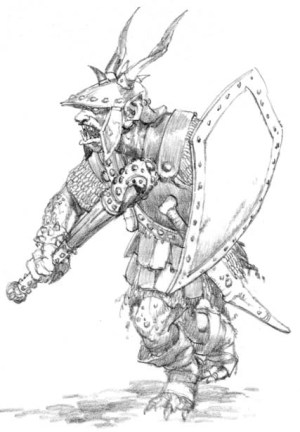 With all the news that The Hobbit has begun filming, my stalwart partner here at Black Gate L.A., Ryan Harvey, has been spending his days reenacting the Battle of Five Armies using mini-figs he’s collected since before the release of the LOTR trilogy. Although endlessly funny hearing him deliver Thorin’s final speech to Bilbo over and over again, I forced myself out on the seaside balcony to watch surfers and come up with this week’s blog.

All the cinematic excitement reminded me of my own days in Tolkien’s realms, the reading of his novels just the cusp of my experience as I delved deeply into Iron Crown Enterprise’s Middle-Earth The Role-Playing Game in 1986. MERP, as it is more affectionately called, became the second leading RPG sold in the 1980s, and although miss-management and rather daunting licensing dealings with the Tolkien estate finally resulted in the games dissolution and the company’s bankruptcy, the body of work put out by I.C.E. in a little over a decade remains the Middle-Earth canon for all role-players who truly take the genre seriously.

It was in these pages I was first introduced to the art of Liz Danforth. She, and fellow femme fatal Gail B McIntosh, were constants involved in the supplements of the game along with perhaps the least remembered but unlimitedly talented color-cover man, Angus McBride [1931-2007] who in my opinion will always be THE visionary of what Middle-Earth should be. 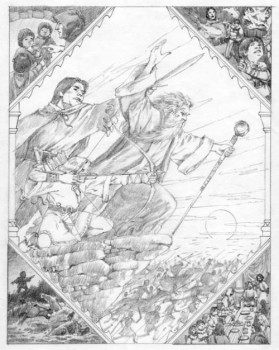 As a historian by trade, the content involved in the supplements [I won’t call them modules because they were more description than adventure] was magnificent. The gaming system, based roughly on I.C.E.’s other RPG Rolemaster, was an intriguing blend of boxes and percentiles, and the critical system was stellar. Magic became something much more than lightning bolts and fireballs, and I always found it appropriate to Tolkien’s vision.

I was also taken in by the game’s in-depth research of Tolkien’s extensive lineages and families. To think, twenty-five years after I stopped playing the game, I could begin reading Tolkien’s Children of Hurin and promptly be able to find the statistics for every major character in that book on my RPG bookshelf. It’s amazing, and in case you wanted to know, Hurin is a 100th Level Warrior and carried a +75 Troll-Cleaver battleaxe and the sword ‘Orcruin’, a +90 black eog sword edged with black laen. Turin, the poor bugger, was only a 99th Level Warrior… 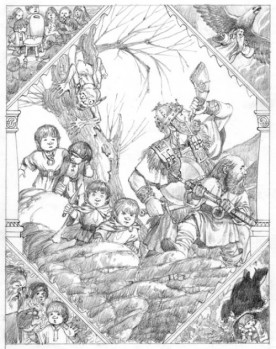 Anyway, both Ryan’s an my own love affair with all things Tolkien started me thinking about my varied industry contacts, and I ended up sending out a feeler email concerning the topic of Tolkien and if anyone had ever considered doing their own versions of the classic characters we’ve grown to love.

To this, I found it immensely interesting that for the most part, all the fantasy artists I know [and there are a boatload] had nothing to do with Tolkien unless they were paid to do so. Now I don’t know about you, but if I could create fantastic art, I’m darn sure I’d at least sketch out some of my favorite things even if no hard currency were involved. In my studio you’d find personal speculative pieces on Marvel’s Rogue, a couple tributes to Fafhrd and Grey Mouser, probably an Obi-Wan somewhere, and then there’d be my collection of Tolkien Iconics. Side Note: I guess such a thought might be narrow in vision, as I am after all a writer and don’t sit around doing fan fiction of the above characters, so perhaps I’ve been a bit far from the mark in the above. 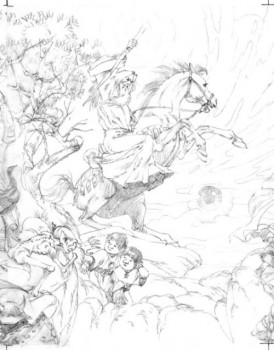 Still, my search didn’t come up empty-handed. To my extreme delight Walter Velez said he’d indeed created several pieces concerning Tolkien. This, however, was tempered by the fact that he’d done them for cash, only to have the project eventually pulled. The result, a rather non-Velez set of sketches concerning Tolkien’s classic Lord of the Rings.

Now Velez, for those of you who don’t know him by name, is the fantasy artist best recognized for his work on two series, Myth, by Robert Asprin, and the short story compellation universe of Thieves World.

I was first introduced to Velez’s rather Baltic inspired middle-age fantasy with Skeeve and Aahz in Asprin’s 4th Myth novel Hit or Myth. His style runs from comical in Myth, to hardcore in Thieves World, but all the while his brush strokes are unmistakable. When you see a Velez, you instantly know it, and again, I think that is the defining nature of what makes an artist last in any industry they appear. 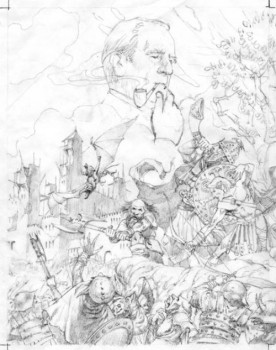 For the purpose of Lord of the Rings, Velez’s distinct style was realigned, the Franklin Mint wanted Velez to replicate the artwork of the 1978 Ralph Bakshi animated classic. Velez, a master artist, did as he was told, his work taking on the animator’s view of the characters that look remarkably similar.

He was also given the task of creating scene plates, these depicting some of the more memorable moments in the trilogy, and a few limited edition sculpture sketches and character designs. Walter sent me dozens of roughs, some first draft editions, some more finalized, and I wish I could share all of them here but the size of the article won’t allow it. 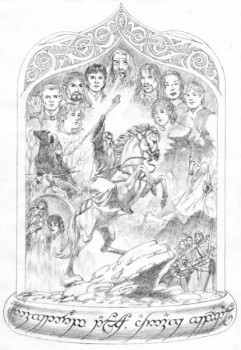 I also want each of you reading this to see a bit of the tough world of the freelance artist as well. Think about this project, the work involved, and then consider having it all scrapped because someone you’ve never met gets cold feet for any one of a dozen reasons. These pieces were commissioned in 2000, and I believe the release of Jackson’s Fellowship of the Ring might have signaled the death-knell of a project because someone at the Franklin Mint insisted on using twenty year-old art to mimic instead of what Hollywood was in the process of marketing.

Anyway, in conclusion, Middle-Earth Images = Awesome, and Ryan Harvey does an incredible vocal rendition a Huston-inspired Gandolf. Ah, and all the works you are seeing in this article have never before been published, so be the first to enjoy them. And thanks again to Walter Velez for allowing us to see these. If I’m lucky, John O’Neill will pony up some cash for me to go to Crete for an interview with this great American artist.