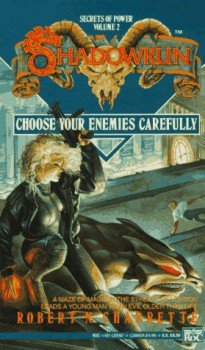 Inspired by a list of classics to be avoided at all costs, I found myself thinking about what books from the SF/F genre should come with warning labels and came up with the following list of six books. In reverse order of importance:

6. Were-seal novel by someone or other. I can’t remember the name of this one, but it was an astonishingly bad novel about a lonely lighthouse keeper and a sexy were-seal. Hawt stuff. I don’t have the book because a friend lost a bet and had to read it… it was so horrific that by the second chapter, he paid $100 to let him off. This would be higher, but there is almost no chance you will read this unless you a) are on a fiction jury or b) lose a bet.

5. Arrows of the Queen by Mercedes Lackey. It’s not enough that it’s written by the most mercilessly mediocre writer in the genre, but it is based on the world that she conceived when she was only thirteen. Which will come as absolutely no surprise to anyone who is so foolish as to subject himself to it.

4. Shadowrun: Choose Your Enemies Carefully by Robert Charette. It was boring, right up until the attempted bathos of an exploding caravan blown apart by bazookas wielded by flying elves transformed it into complete self-parody. Then it wasn’t boring anymore, it was just excruciatingly bad. Noteworthy for being the only book I have ever intentionally thrown away.

3. Firefly by Piers Anthony. Let’s just say that if you happen to see a copy of this on the bookshelf of your priest or public school teacher, it’s probably a good idea to consider an immediate transfer to another diocese or school district. Very shocking, in that Anthony uncharacteristically fails to provide much in the way of puns or to show the lighter side of paedophilia.

1. The Wheel of Time by Robert Jordan. Almost certainly the worst epic fantasy ever written. It is one of the few series that will cause one to actively root for the villains, whose narcissistic, psychopathic, mass-murdering tendencies are significantly less offensive to the reader than the incessant angst-ridden whining of the protagonist. I slogged through a few of the books in the faint hope that Rand al’Thor might die a painful death, or at the very least shut the hell up, but only managed to develop active antipathy for a number of the secondary characters as well.

Lord Foul’s Bane? (tedium lightened by misery)
Plutonium Blonde (threw this one across the room after half a chapter.)
Elantris (Worst. Dialog. Ever.)

So…are these just books you don’t like, or “classics” you don’t like? Because four of the six authors here are (as far as I’m aware) wildly popular yet known to have flaws (in other words, popular successes but not critical successes), but I’ve never heard them referred to as “classics”.

Here’s another vote for Lord Foul’s Bane, a book I threw across the room several times, and yet mysteriously kept picking back up. Vile vile vile.

I did that also with Mercedes Lackey’s The Last Herald-Mage. The movement of her sentences suggested that she did not actually enjoy the writing part of writing, and the fact that she now hardly ever writes without a collaborator would seem to bear that out.

That’s all the fiction I’ve every thrown across the room, though I developed such an antipathy to the Deconstructionists I had to read in grad school that my husband nicknamed my study the Avery Research Center for Bad Book Ballistics. Derrida’s The Gift of Death left a dent in the both the plaster and the rental deposit when we moved out of that apartment.

The remedy for throwing bad books seems to be home ownership. I like my house more than I dislike either Mercedes Lackey or Jacques Lacan.

[…] Hardy on Violence Isn’t Always the Answer: Causing Trouble Without Making Trouble.Theo on SF/F Books You Must Not Read.Richard Dansky on In Which I Provide The Answers To The Greatest Questions Currently Sparking […]

These are simply books I don’t like, and which I think the normal SF/F reader will not like either. It was the Telegraph list that was a list of so-called classics, although the status of some was quite dubious. (Neither Twilight nor Harry Potter can reasonably considered a classic yet.)

I didn’t dislike Lord Foul’s Bane myself, but the Thomas Covenant books are admittedly somewhat of an acquired taste.