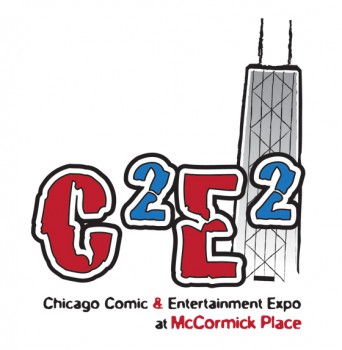 It isn’t very often that I suffer from complete sensory overload, but the Haunted Attractions Show in St. Louis, immediately followed by the Chicago Comic and Entertainment Expo nearly did me in. It was therefore necessary to retire to the underground offices of Goth Chick News, barricade myself in with the espresso machine, the blender and a bottle of good tequila, and take a few quiet days to absorb everything I had seen.

Black Gate editor and big cheese John O’Neill graciously stood in for my post last Thursday, partially out of sympathy for my over-stimulated state; but mostly because he wanted the blender back.

Now rebooted with sufficient caffeine and marguerites, I am ready to begin telling you more of the amazing events of the last two weeks.

C2E2 takes place in Chicago’s largest convention center, McCormick Place and the event consumed all of one of the largest buildings. Focusing on all manner of artwork, collectibles, music, film and entertainment, it was… well, gi-normous.

Though it will take several weeks of posts to delve into detail on all of the fantastic things I saw, I start as always with a Best of Show overview.

And before I insult all of you hard-core comic fans, let me say that I am in no way expert enough to comment on the hundreds of comic / graphic novel artists and companies which were represented at the show. Everyone who was anyone in this field was represented.

Instead, I’ll still to the more pedestrian approach of telling about the items and people who struck a particular chord for one reason or another.

The coveted 5-Bat Award goes to an artists’ collective of designers, illustrators and plush artists who go by the name Oh No! Doom. They are makers of, among other things, Fluffy Friends Chompin’ Plush Toys which are basically faceless monster puppets whose toothy mouths are worked by your hand.

I can’t really explain the attraction; only that when I was driving home, it was hard to get these ridiculous little horrors out of my head.

Oh No! Doom also make a man-eating cuddle-fish t-shirt. Go figure because I sure can’t.

Check out their website for these and other strange and unusual items.

Next up is a favorite from 2010’s ComicCon event, the artist known as Ant Lucia. His specialty is gothic pinup girls that are favorites here in the Goth Chick offices. Think WWII fighter plane nose art with a horror twist.

Ant’s art is available in a variety of sizes and he’s even created the classic pinup calendar with some new classic images for 2011.

Those naughty monster girls never fail to attract attention and are sure to put a smile on your face. Check out Ant’s latest work here.

If you’re a fan of the Muppet Show (and who here isn’t?) you’ve got to get familiar with Transylvania TV, but don’t do it when the youngsters are around.

I nearly killed myself laughing and that’s saying a lot.

Several episodes are available for your personal hilarity, here.

If I’m alone in loving the site of a man in a kilt, then so be it. But somehow I seem to gravitate to the Utilikilt booth like I have internal GPS.

Definitely fitting under the “entertainment” category of this expo, the Utilikilt booth had a huge crowd around it and I’m only able to talk to the kilt-wearing company spokesmen because they recognize me from stalking their booth at the ComicCon.

I am thrilled to report that 2011 brings several new designs including the “Tuxedo” for formal occasions, and the “Camouflage” for when real men want total “freedom” during hunting season.

I couldn’t tell you what a camouflage kilt is doing in a Goth Chick article, but it just is, so deal.

Check out the entire line here. If you buy one and send me a picture of you in it, you’re guaranteed an interview in an upcoming post.

Last but certainly no least is artist David McAdoo, creator of the graphic novel Red Moon.

Though I loved the premise of the story which follows the epic journey of 2 dogs, Mox and Daeden, as they try to discover the meaning behind Mox’s horrific visions of a world in destruction (I’m in for any story with dogs in it), what really caught my attention was David’s amazing artwork.

It puts me in the mind of the horror comics I first fell in love with.

Check out his incredible drawings at www.redmoongraphicnovel.com.

In addition to these memorable items, I’m saving entire posts for a couple of very special topics.

Coming soon I’ll be bringing you in depths look at the new indy thriller film Boy Wonder as well as a chat with Dirk Manning, the genius behind Nightmare World comics.

[…] Last Sunday I told you all about NIGHTMARE WORLD comics which I had the good fortune of discovering last month at the C2E2 show in Chicago. […]