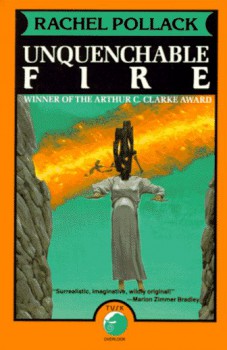 Reading fantasy or science fiction, they say, is not as easy as checking a book out of the library and digging in. You need to know the pattern. From the very beginning of the book, you look for clues about how the world works. When odd words are dropped into the narrative, you already know they won’t show up in any dictionary; if there isn’t a glossary in the back, you work them out through context. People who don’t know the code — people who are used to reading mystery, say, or mainstream literature — find themselves lost and frustrated within pages or even sentences. And there’s a similar phenomenon with every genre. It would be ridiculously difficult to read a mystery story, for instance, if you weren’t prepared for misdirection and red herrings.

When I was reading Rachel Pollack’s Unquenchable Fire, I struggled with the strong sense that I didn’t know the code.

Unquenchable Fire is, on the face of it, a fantasy novel set in a near-future America that has been transformed by a magical religion. Some decades ago, a group of people called the Founders converted the whole country with miracles and storytelling, which in this universe are very close to the same thing, and they’re revered somewhat like saints. Spirits and totems are everywhere and often have real physical effects. If someone’s soul rises during a particularly uplifting concert, it really, literally leaves their body and might possibly get caught in the propellers of a low-flying plane. Government agencies and businesses deal with magic; there’s an organization that will find any dream in their catalogue and tell the dreamer what it means, for instance. And it’s quite possible to be threatened by an evil spirit on the streets of New York, then rescued by a good one and given a mysterious task.

That’s where the story begins, more or less: with an exalted storyteller being sent to Poughkeepsie for a specific festival to tell a particular  — and particularly grim — sacred story. This connects obscurely with the main character, Jennifer Mazdan, who didn’t even make it to the ceremony; instead, she had a dream that isn’t in any catalogue. The narration weaves about in time, especially at the beginning, mentioning miracles that were later performed by Valerie Mazdan, also called Courageous Wisdom. After a number of strange events — strange for this world, as well as ours — Jennifer Mazdan discovers that her dream made her pregnant. It isn’t hard to work out that Valerie Mazdan is going to be Jennifer’s daughter and that there’s going to be something very, very unusual about her. Perhaps, judging by the miracles, something a bit divine. 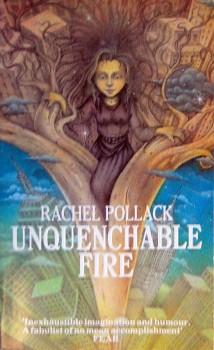 This story felt almost plotless to me. It’s about Jennifer Mazdan’s pregnancy and how she comes to terms with it, about her emotions and her fury at being essentially raped by God; on an emotional level, it can be intense. In another sense, though, very little actually happens. Jennifer has very little choice in anything that she does. She can’t take a stand and push back against the powers that be, because the powers that be include the whole universe. The only thing she can control — as much as any human can — is how she feels.

This is where I start to feel lost, because a lot of the meat of the story is in dreams and visions and symbolism, and I was quite sure I wasn’t catching all of it. I noticed some imagery from the Tarot — at one of her lowest points, for instance, Jennifer seess a child carrying a Hanged Man doll — but I know quite a lot slipped by me. I feel that I would appreciate the story far more if I had studied the Tarot and read up on religions, particularly neopaganism.

I have to admit that I found the book an intensely frustrating read, not because it’s bad, but because I hated the feeling that information was flying past me and I couldn’t catch it. You could compare the experience with listening to Stravinsky if you’d never heard anything more modern than Beethoven: there’s a structure, and it might even be a brilliant structure, but you don’t have enough reference points to wrap your head around it.

I should also mention that this book has, for lack of a better term, an earthy feel. Body functions are not avoided. At least one of the Founders’ miracles seems somewhat scatalogical from our point of view. This makes sense considering that the religion seems to be fairly physical and ecstatic rather than otherworldly, but it may still be a problem for some readers. Also, Jennifer seriously contemplates abortion, so if that’s a sensitive topic, steer clear.

In short, I’m not wholly sure who I should recommend this book to. The worldbuilding is fascinating, the writing is good, the myths weave well into the story, and the story…  loses me. I’m fairly sure it’s a brilliant, powerful novel for someone, but I don’t even have enough information to say, “If you’re interested in such-and-such, read Unquenchable Fire.” I’m viewing a work of art in the wrong language, using the wrong code. I can tell it’s art, but since I don’t have the proper reference points, it inevitably leaves me cold.

Maybe I’m the person it’s brilliant for. I’ll track it down and report back.

This is actually a difficult book to find, at least in my neck of the woods. I’ve kept an eye out for it for years, ever since Pollack took over from Grant Morrison on the DC comic Doom Patrol. I actually didn’t care for Pollack’s work (especially after Morrison’s run, which was phenomenal), but it was the kind of jumbled oddness that suggested that it might be simply a writer crossing from one medium to another and not quite managing the transition. Isabel, this review actually makes me more intrigued to find Pollack’s prose work.

Although to prepare, you may want to read any one of these half-a-dozen books by Rachel Pollack about the Tarot:

Rachel Pollack’s Tarot Wisdom: Spiritual Teachings and Deeper Meanings
Complete Illustrated Guide to Tarot
The Haindl Tarot, Minor Arcana
The Forest of Souls: A Walk Through the Tarot
Best Tarot Practices: Everything You Need to Know to Learn the Tarot
Tarot for Life: Reading the Cards for Everyday Guidance and Growth
Seventy-Eight Degrees of Wisdom: A Book of Tarot

Or her book of stories about Tarot cards:

The Tarot of Perfection: A Book of Tarot Tales

I think Isabel may have pegged it when she said “I would appreciate the story far more if I had studied the Tarot.” 🙂

I hadn’t realized that Rachel Pollack had written Doom Patrol! Now I AM intrigued.

What would it take to talk you into doing a review for us?

Although maybe you should review the Grant Morrison run first. 🙂

I was recalling this novel the other day. It’s been years since I read it — which was when it was published. It is a brilliant composition indeed!

[…] almost immediately; it was hard enough to read in the first place. Because it’s weird. This review describes it almost exactly the way I read it, “When I was reading Rachel Pollack’s […]

[…] almost immediately; it was hard enough to read in the first place. Because it’s weird. This review describes it almost exactly the way I read it, “When I was reading Rachel Pollack’s […]