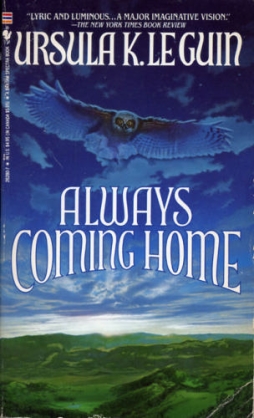 These past two weeks I’ve found myself writing here about science fiction, or speculative fiction, as the literature of ideas. It seems to me that ‘the literature of ideas’ implies something other than what we normally find in sf; I feel that it suggests writing that uses ideas to establish the structure of a work, instead of relying on traditional narrative. I’ve found a couple of early examples in Olaf Stapledon’s Star Maker and Jack London’s The Iron Heel. As a way to wrap up the discussion, I thought this week I’d look at a more recent example of what I mean by the literature of ideas: Ursula Le Guin’s Always Coming Home.

The book’s mostly set in a post-apocalyptic or at least post-industrial future, on the Pacific coast of the United States. It examines the folkways of the people called the Kesh, giving examples of their dramas and poems, examining their way of thinking and symbol-systems, and, since autobiography is one of the arts practiced by the Kesh, incidentally giving the life story of several members of the culture — most notably the extended narrative of a woman called Stone Telling. Stone Telling’s tale can easily be seen as the backbone of the book; divided into three parts, it functions as a recurring structural element that ties the mass of material together. But the book also has the feel of a well-stuffed anthology, a collection of fables and lore and myth that make the people as a whole come alive. And, as well, there are brief sections in which Le Guin herself ruminates on the difficulties and joys of writing this sort of “archaeology of the future” when the future does not yet exist, and must be imagined. 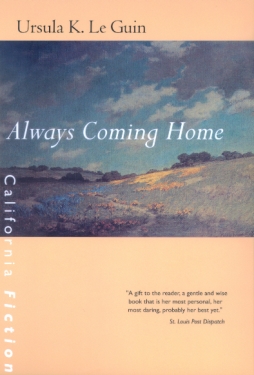 The Kesh and their world are interesting enough to sustain this unusual many-angled examination. There is a distinctly Native American feel to their culture, which is only logical – the geography in which they live has shaped them in similar ways. Le Guin presents them as a stable, practical, functioning society. They live on a smaller scale than modern humanity; the Kesh are a people of villages, who nevertheless exist as part of a broader tapestry of peoples, an element in a wider economy. They have problems, but they have their own solutions to those problems. They have a history, and they have their own perspective on that history.

The book is complex and self-aware. It can be read in a number of different ways. It can be imagined as Stone Telling’s tale, with the rest of the material about the Kesh acting to explain the cultural idiosyncrasies of her story. Or it can be viewed as multiple narratives, interlocking and explicating each other. Or it can be viewed as simply an assortment of texts, a collection of words gathered from the future and which alone must serve to create the world of that future, just as the collection of texts that has survived out of the past must be relied on to help build our sense of the past, with all its lacunae and unknowns.

Le Guin’s an exceptional writer, not only in terms of technique and structural innovation, but in terms of prose artistry. Always Coming Home is a typically skillful work. However one reads it, this is a finely-crafted book. I feel that Le Guin’s style helps shape the imagined culture of the Kesh in ways that are not necessarily obvious; that is, I think the virtues of her writing are reflected in the virtues of the Kesh. The precision, the sense of detail, the awareness of the physical details of the world without being overwhelmed or limited by them — the ability to pick out the telling detail, the thing that is precisely correct in itself and also precisely correct as a symbol of something more — these things I feel are characteristic both of the writer’s prose and of her imagined culture. There is therefore a harmony of ideas and language in the book. 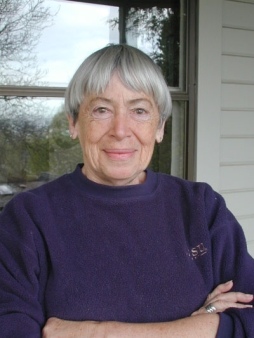 In creating an alternate culture, in imagining it as thoroughly and as profoundly as she does, Le Guin offers a critique of the themes and accomplishments of contemporary culture. In structuring the book around the fictional culture, Le Guin insists on the importance of the culture, on the importance of its thought and way of life. The structure brings out the theme. The ideas define the shape of the text.

Comparing this with Stapledon and London is interesting. The books all in some way insist that the present moment and present society is only relatively important; that not only are there alternatives, but that what we see around us must and will change in time. That the ideas we have always accepted, however unconsciously, as a natural part of how we shape our lives are not in the end permanent. There are other ideas. There will be other ideas.

Practically, London’s book is a didactic look at society evolving. There are some general thematic similarities with Always Coming Home, but ultimately the structure’s much simpler and, I feel, less engaging. On the other hand, though I noted that Stapledon’s Star Maker has the feel of an anthropological report, Always Coming Home is a much more thoroughgoing work of fictional anthropology. Stapledon writes as a detached observer. Le Guin not only creates a fictional people, but lets them speak for themselves, in their own language and their own stories, while also providing enough of a framework that we understand the rules of her ‘archaeology of the future.’ I think hers is the subtler and greater work. 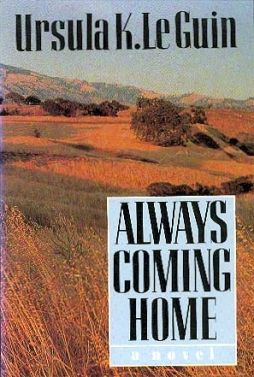 It’s not flawless. One of the other nations that live near to the Kesh is the Condor people, and while the Kesh are an individualised, credible culture, the Condors seem like the winners of an ecofeminist utopia reverse bingo: they’re patriarchal, and militaristic, and monotheistic, and hierarchical, and rather pointedly all the things the Kesh are not. The Condors are a problem in the book, I feel, not only because there seems to be much less authorial sympathy with them than the Kesh, but because their existence implies an instability in the cultural framework of the book: either the Condor culture isn’t functional in the long term, in which case it would be nice to see why, or else it is, in which case one wonders at the eventual failure of their dreams of empire. It’s a question Le Guin herself considers, but which she avoids answering. The evasion of this question is unusual for Always Coming Home, and I can’t find a way to read it as helping the book.

Still, this is a minor issue next to the overall coherence and success of the book. More than any other book of ideas that I can think of in sf, Always Coming Home keeps the reader involved through both the quality of the prose and the quality of ideas. The Kesh not only feel real, they feel surprising; there are layers to them. And they feel rich, in symbols and ideas; there’s a coherency to their way of life, to the way they look at the world, that’s reflected in the art they make and the poems they write and the way they lay out their villages. Le Guin doesn’t make a big deal about these things. The symbolism is there, if you care to look for it.

Personally, I look at the book as a demonstration of how a culture lives. It lives in the stories it tells, in the stories it allows its people to live out, but lives also in and of itself, as a collection of ideas that interacts with the physical world around it. The ideas and themes by which the Kesh live are the ideas and themes of the book. And the book is aware of itself as a fiction, so the writer knows her archaeology is more conditional than others, an archaeology of ideas. And so, also, this book that records it is a specimen of the true literature of ideas; perhaps the finest one I know.

I’m glad you included a scan of the trade paperback. The first copy of ALWAYS COMING HOME I purchased came with a casette tape of Kesh love songs (with music by composer Todd Barton), and was heavily illustrated by Margaret Chodos with sketches of plants, landscapes, artifacts, and animals.

It always made the Bantam mass market paperback seem like an aproximation of ALWAYS COMING HOME to me, since it was missing the music and about a hundred drawings.

Hmmm, I’ve always had the mass market version, so I wasn’t even aware that there were illustrations. I learn something new every day. Now I’m going to have to head to Ebay.

I’ve always loved this book, and your review is phenomenal Matthew. Makes me want to dig into it again. The only thing that I always felt was lacking was the material culture of the Kesh; words alone don’t fully flesh out any civilization. Of course, you were addressing a literature of ideas.

The original 1985 trade paperback release was part of a box set with the casette. Here’s the Amazon listing:

If you can’t obtain the cassette tape, or if you have a copy and it’s in bad shape, you can order the songs on CD. Le Guin’s website has info on that here: http://www.ursulakleguin.com/ACH/ToddBarton-KeshMusic.html

Sarah, thanks for posting that link!

John and jmichaelmatkin, thanks for the good words. Always Coming Home was a book my girlfriend lent me, and it knocked me out. Le Guin’s obviously a well-known writer, but at times I think she has, as it were, receded into the foreground; almost as though she’s taken for granted. So I was glad to realise I had a good chance here to talk about this book!