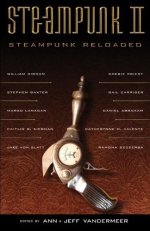 You can read my review of Steampunk II: Steampunk Reloaded by Ann and Jeff Vandermeer over at the SF Site.  Here’s the general gist:

The various VanderMeer collections stand out because of their sense of humor about genre classification lacking in most academic treatments and that they supplement terrific fiction with offbeat critical discussions, typography and other diversions of interest. A prime example here is “A Secret History of Steampunk,” a collage incorporating graphics, multiple authors, and just plain weirdness to satirize the academic research and discussion of obscure literary fragments…many of these tales are positively brilliant. Margo Lanagan’s “Machine Made” is a disturbing fable of a sexually repressed newlywed taking revenge on a doltish husband whom she discovers seeks pleasures of the flesh through a mechanical servant. Caitlín R. Kiernan’s “The Steam Dancer (1896)” relates the desires of a woman rescued from death with bionic appendages who only feels truly whole as a saloon dancer before an audience of opium addicts attentive to her body, but oblivious to her artistry. As long as we’re on the subject of mechanically enabled creatures, “The Cast Iron Kid” by Andrew Knighton presents a Western gunfight in which the title character is undone not by a six-shooter, but by principles of subatomic physics. “As Recorded on Brass Cylinders: Adagio for Two Dancers” by James L. Grant and Lisa Matchev probably could have been recast as a “mainstream” SF story in which a pair of androids share the troubling human emotions of love and loyalty;  however, put in a steampunk context, it seems to me that much more poignant..