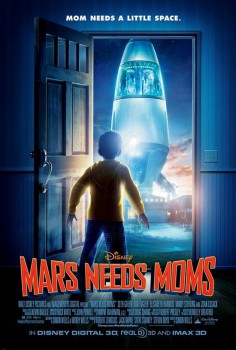 The New York Times is reporting that Mars Needs Moms, which opened on Friday, “is on track to become one of the biggest box-office flops ever.”

In the movie business, sometimes a flop is just a flop. Then there are misses so disastrous that they send signals to broad swaths of Hollywood. Mars Needs Moms is shaping up as the second type.

Walt Disney Studios spent an estimated $175 million to make and market Mars Needs Moms, which sold $6.9 million in tickets at North American theaters in its opening weekend. That grim result puts the 3-D animated adventure on track to become one of the biggest box-office bombs in movie history, on par with such washouts as The Adventures of Pluto Nash, Cutthroat Island and The Alamo.

Much of the blame for the film’s poor reception is being placed on high ticket prices, especially for Imax.  While it costs between $8 and $9 to seat a child for a typical movie, ticket prices for 3-D screenings average around $13 — and $15.50 for the Imax version.

The film is based on the 2007 book Mars Needs Moms! by Berkeley Breathed, creator of Bloom County. It follows the adventures Milo, of a 9-year-old boy (voiced by Robot Chicken creator Seth Green) whose mother (Joan Cusack) is abducted by Martians.

The NYT predicts the impact on Disney “will be severe.” Disney has already closed down ImageMovers Digital, Robert Zemeckis’ animation division. Zemeckis, the Oscar-winning director who helmed Back to the Future, Forrest Gump, and The Polar Express, was a producer for Mars Needs Moms.  His last film using the same motion-capture animation style, A Christmas Carol (2009) was also a disappointment for Disney, and now the studio has canceled his next planned feature, a 3D remake of Yellow Submarine.

I thought the trailer looked good, and Breathed’s book was terrific. My kids want to see Mars Needs Moms, so I guess I’ll discover firsthand if the film is enjoyable… but the odds aren’t promising.

That’s too bad it’s not gonna make its money back. Disney isn’t as great as it used to be, but it’s nice to have something animated in theaters. But it makes you wonder, if the animation of Mars Needs Moms was hand drawn would it have performed better?

Actually, Seth Green just did the motion capture acting. They changed the voice actor because he didn’t sound much like a nine year old boy (a decision Green sanctioned).

I loved the book. My mother loves Mars, so I called her when I read it and made her buy it. She then donated it to the library where she works.

Come see the movie with me!

Family As An Entity