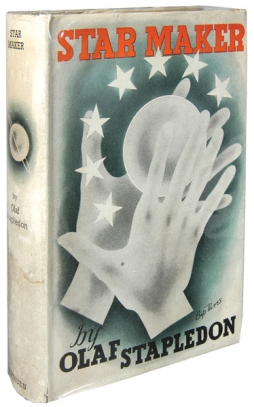 It’s often said that science fiction (or speculative fiction, whatever term you prefer) is a ‘literature of ideas’. I’ve never been able to agree with that statement. In part, I feel much the same way this writer does, though perhaps not as strongly; that is, to say that sf is a literature of ideas is to overlook the fact that the best mainstream literature is every bit as engaged with ideas, if not more so. Consider, say, Iris Murdoch’s use of Wittgenstein’s imagery and philosophy. Is that not writing engaged with ideas?

But I think also that there’s another difficulty with considering sf as a literature of ideas. That being: it seems to me sf very often fails to realise the promise contained in that phrase. What I mean is that ‘a literature of ideas’ would seem to imply a literature with a different structure than traditional literature; a literature with a different sense of how to shape a narrative, or how to use language. A literature actually shaped and structured by ideas, not plot or even character. I feel Murdoch goes some distance toward that sort of thing in a book like Under the Net, playing about with forms like farce and bildungsroman, and tying them together with the Wittgensteinian ideas about the representation of reality — with which, as somebody writing a basically mimetic work, she’s already engaged. What’s the science fiction equivalent of that?

It seems to me that an example of the true literature of ideas in sf is something like Olaf Stapledon’s Star Maker. Stapledon was a novelist, but a philosopher perhaps more so; and Star Maker seems often less like a traditional narrative than an extended philosophical meditation or anthropological field report. The whole book is essentially one big infodump. But a fascinating infodump. 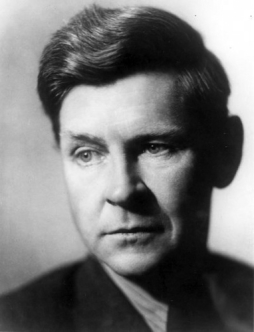 What happens in the book? Essentially, an unnamed protagonist, who has recently experienced some marital strife (apparently a kind of mid-life crisis) leaves his house and goes to a nearby hill; and there he has a strange out-of-body experience. It’s not unlike a Medieval or Renaissance allegory, that begins by establishing that all that follows is a dream as an excuse for using fantasy to illuminate the human condition. Except Stapledon never claims that it’s a dream. It’s simply something he, or his narrator, experienced.

In this vision, he travels as a disembodied intelligence through the solar system and galaxy, finding another planet filled with intelligent life. He spends some time there, bonding with a philosopher on that world, learning how life there is very different from Earth (due to the different nature of alien bodies and processes of life) and yet also very similar (in terms of the general political drift, which Stapledon meant to emulate his own era). Ultimately, Stapledon and his alien philosopher end up journeying together through the galaxy, bonding empathically to form a plural intelligence — the first-person narration shifts from the use of ‘I’ to ‘we’. The combined intelligence proceeds on, through other alien planets, meeting and joining yet more spirits, learning more and more about the nature of the universe, seeing time pass in its centuries and millenia and billions of years.

There’s no dialogue to speak of in the book; no real description of action. As I said, it has the feel of a report, with drama and suspense incidental products to the extent they’re there at all. It has a real point to it; that is, the structure Stapledon uses says something about how he sees intelligence, how he sees the universe, and how he sees communication and community. This last is perhaps the main theme of the book; the marital strife at the beginning of the book is the note that defines the key of the science-fictional matter. 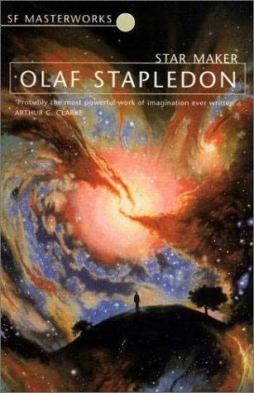 So the benefit to the way Stapledon wrote the book is that the ideas seem to shape the structure and sequence of events to an unusual degree. The drawback is that there’s a minimal amount of drama or suspense. There are some hints of things to come later in the book, as when a report of events must pause in describing a thing to indicate some exceptional aspect which only became clear to the report-writer at a later point; it’s a curious kind of foreshadowing that I think helps to reassure the reader that there will be some development of events, however unusual. Mostly, though, you read the book to see what the joint intelligences learn. You read it for the big ideas.

Structurally, then, it’s the ideas that are key, not the drama. Which means the book can only be as strong as those ideas. What makes the book work is that Stapledon’s clearly given considerable thought to how his universe works, and the notions he presents are consistently original. More: as the story goes further along, the scale increases in scope. So not only are you being hit with more and more ideas, the ideas themselves are grander.

Paradoxically, for all the grandiose notions of cosmic intelligences Stapledon puts forward in the book, he was also deeply concerned with the events of his time. The book was first published in 1937, and Stapledon was one of a number of thinkers who saw civilization as a whole at a point of crisis. Specifically, Stapledon (who held no academic post) three times contributed to the journal Scrutiny, founded and edited by F.R. Leavis. 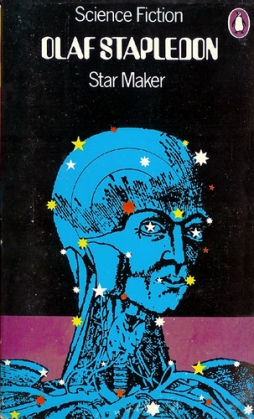 Scrutiny can generally be said to have been concerned with standards in literature, with the position of literature in society, and with criticism as an evaluative act. Politically, in 1939 Stapledon contributed to a round table article in the journal in which various writers tried to enunciate the situation of the writer and thinker relative to the society of the moment, and what their responsibility was in their art. Many of the writers considered their culture threatened from two sides; on the one hand, the apparent success and growing military might of fascism and communism seemed a challenge to traditional humanism, while on the other the rapid increase of science, mass production, and mass media seemed to call into question the sense of value these writers found in literature, and the acceptance of those values by society at large. Stapledon himself argued that the “creative people” had the responsibility “to produce works of imagination which symbolize and epitomize aspects of man’s struggle to adjust himself to his environment.” Star Maker might perhaps profitably be viewed as a product of this sense of responsibility. Certainly Stapledon grappled with these issues of creativity, responsibility, and the world’s situation in the book’s preface.

Stapledon would also write a fascinating article for Scrutiny on “Escapism in Literature,” considering how literature could be said to work and what sort of approaches were valid. Star Maker seemingly has little to do with aesthetics, except insofar as any book can be seen as inherently an aesthetic argument. But: Stapledon argued, broadly speaking, that literature can flow from a fundamentally ‘creative’ impulse (when the writer is seized by the pure desire to create), an impulse to ‘propaganda’ (when the writer is seized by a certain idea that he or she is compelled to explore), an impulse to ‘release’ (when a book combines an original creative impulse with things like power fantasies and sexual fantasies), and an impulse to ‘escapism’ (when the power fantasies and formula are all there is). Stapledon acknowledged that a given work could move from one impulse to another, but my point here is to say that in essence Star Maker would seem to be an example of a work written purely from the creative and propaganda impulses, exploring the idea of community through an untraditional structure, and trying to comment on the situation of the world as Stapledon saw it through the ideas of how the universe as a whole would develop through all the rest of time.

The book’s not been without influence on modern science fiction. You can see Stapledon’s big-idea approach in the work of a writer like, say, Iain M. Banks — though the use of narrative is wildly different, the structure more conventional. Stapledon’s even been given credit by Buckminster Fuller for coming up with the idea of Dyson Spheres in Star Maker. On the other hand, C.S. Lewis, while acknowledging Stapledon’s imaginative power, criticised what he perceived as an atheistical bent in Star Maker, and an amorality (if not outright immorality) in one of Stapledon’s other sf books, Last and First Men. Lewis ended up writing his Space Trilogy in part as a rebuttal to Stapledon’s ideas. Lewis, of course, wrote those books with a conventional narrative. For better or worse, Stapledon’s creation to the true literature of ideas has not inspired many true successors.

I think the cliche of “literature of ideas” developed as a kind of excuse for the cardboard characters and creaky plotting of pulp fiction. “Well, it may not be literary, but its about ideas,” the 12 year old boy in glasses and corduroys can harrumph. Of course, I’m guessing, and, of course, Stapeldon was not a pulp writer.

For what difference it makes, my here’s my take on Starmaker:
http://www.sfsite.com/09a/sm88.htm

I can hardly begin describe how amazed I was when I read Star Maker for the first time, around 03… It’s indeed a foundational work that deserves to be placed with the other primary works, Wells, Asimov, Clarke…

It’s akin to “Dr. Caligari” a movie it takes an artist or early cinema film buff to appreciate. Fairly obscure despite the very faithful fans who keep making sure it’s always available, but there’s hardly a work out there for a long time after that didn’t in some way have some element from it. Only the most blatant “What you see is what you get” stuff had no refs to it for a long time.

Likewise, it’s rather hard, despite being so dated, to find sci-fi that doesn’t have a subject not used in that book. Mass mind societies, world civilizations, composite intelligences. Constructed worlds, intelligent stars and gas clouds, life on and in neutron stars. It’s amazing how dense that work also with it’s sister volume, “Last and First men” have covered everything even before the genre matured. The tributes, the coincidental elements, the reactions.

For instance, CS Lewis was very outraged by an element in “Last and First Men” and wrote his own sci-fi stories as a kind of Counter to them.

Even the “Riddick” series which I dismissed till I saw Pitch Black reminded me of it. First, it was a philosophical thing, the main character not just an anti-hero, but an alienated criminal type, more societal alienation and desire to avoid society… But the background on Pitch Black, the world that had changed from a vast ocean to a desert planet and of course the symbolism of the suns/rare but lasting eclipse…Right out of StarMaker. The next movie “Chronicles of Riddick” awful name but again plot right out of StarMaker… The Necromungers were clearly a “Blight” that is a world civilization that the transition to space flight causes them to go insane, in their case and again from the book, due to a religion based around space flight, so they become a horrible plague going through the universe until stopped. Again there was good philosophy in the story, Riddick had made a snide remark to a character about belief in God in Pitch Black, and Chronicles had more or less proven him right.