The last couple of weeks I looked at Douglas Lain’s “Noam Chomsky & the Time Box” and “Intellectual Property” by Michael R. Fletcher from the January/February Interzone.  Rounding out the issue’s fiction are stories by Sue Burke, Sarah L. Edwards and James Bloomer.  All share to one extent or another the time honored science fictional Frankenstein theme that ponders the relationship between technology and personal responsibility. 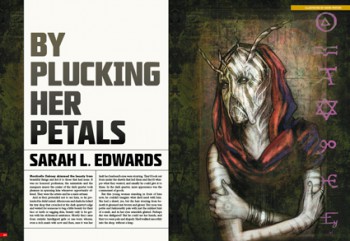 The Edwards tale, “By Plucking Her Petals” is the one out right fantasy among the science fiction, though, for those who care about making such distinctions, arguably alchemy could be considered a “science” and the ethical implications of manipulating human appearance purely for cosmetic reasons is a longstanding SF trope.

Monticello Dabney makes potions that, while painful, can improve the looks of his mostly female clients. Typically, the alchemical applications are brewed from plants and animals, but on rare occasion a human donor can provide a particularly valuable elixir.

Dabney becomes fixated on the motivations of one such mysterious donor.  A “beauty and the beast” riff that has a few creaky plot points, but aims to place humanity over mere technology. 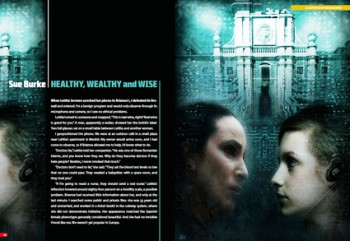 Burke’s “Healthy, Wealthy and Wise” is a bit more ambiguous on that subject.  The narrator is a “Friend,” an Artificial Intelligence that belongs (though who exactly who or what belongs to whom is part of the point) to a U.S.  college student, Brianna, seking to escape her dreary midwestern existence through an exchange program trip to Madrid. One requirements, however, is for Brianna to be the caretaker of Letitia, an unmarried, non-professional middle aged woman in cancer treatment. Letitia doesn’t much care for Brianna for reasons partially related her health, but also her age and social standing.  The Friend works to try to patch things up between the two.  However, even such a seemingly altruistic gesture to improve human relations carries with it a subtle hint of perilous prospects.

Bloomer’s “Flock, Shoal, Herd” is the 2010 James White Award winning story. This is a “going native” story in which the consciousness of military operatives can are somehow or another embedded in the animals and fauna of the title. The war is over, and the narrator’s lover has decided she much prefers her expanded  consciousness somewhere other than in human form.  The narrator wants her back to resume the pleasures of human existence as does the government (represented by a character named Humphrey that I have to think is a nod to Bogart) for other reasons than reuniting the lovelorn.  Love doesn’t win out, because you can never go home again, but you can escape it.

For my money, overall a particularly strong issue.