“Our gods prefer feasting. They live, Uhtred. They live and laugh and enjoy, and what does their god do? He broods, he’s vengeful, he scowls, he plots. He’s a dark and lonely god, Uhtred, and our gods ignore him. They’re wrong.” 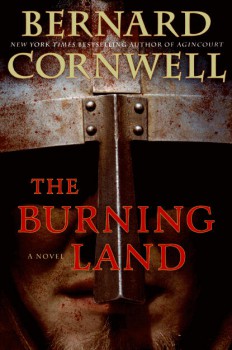 A Saxon-raised-Dane, Uhtred is a microcosm of the rough mixing of Christianity and pagan culture that occurred in war-torn ninth century Britain. Uhtred is a Saxon whose father was killed in a Danish raid. Taken prisoner as a thrall to the Dane Earl Ragnar and raised hard, he nevertheless grows to love the Danes. Although they’re ferocious raiders, the Danes drink deep of life, scorn Christian virtues of humility and pity, and worship the pagan gods of Thor and Odin (they expect less of their followers than the one God, and leave more leeway for fun).

But Uhtred’s loyalties are torn. His hereditary home is the Northern kingdom of Bebbanburg and his peoples are Saxon. Over the course of the series he comes to respect the coldly pious and serious, but brilliant and fair King Alfred of Wessex (Alfred the Great) and at times reject the occasionally murderous habits of the Danish warlords.

As The Burning Land begins Alfred is ailing and the Danish invaders under the wild Harald Bloodhair* are poised to overrun his kingdom. Uhtred has sworn an oath to Alfred and so meets Harald’s forces at a site called Fearnhamme, where he manages to defeat them and stem the Viking onslaught. After suffering a personal tragedy, Uhtred defects to the Danes and finds comfort in the care of his old friend and foster brother Ragnar Ragnarsson (Earl Ragnar’s son). But Uhtred later returns to the Saxon cause to honor an oath sworn to Alfred’s sister Aethelflaed.

The real tension in The Burning Land and throughout the Saxon Stories derives from Uhtred’s obligation to his oaths. Oaths were sacred to the Danes and so they are to Uhtred. Despite his love of the Danes’ pagan gods and their rough, passionate brand of living, he has sworn his sword in the defense of Alfred’s shaky kingdom of Wessex. Uhtred longs to retake his ancestral home in Bebbanburg, but duty—at least for now—trumps his desire.

Uhtred’s oaths are themselves subject to fate, or wyrd. As a pagan Uhtred believes in the three spinners, old women who spin the fabric of men’s lives and then shear it off at their appointed time. If men are puppets on strings, Uhtred asks, why make oaths at all? Because, he believes, they try to establish some rough semblance of order:

It is a question that has haunted me all my life, and the closest I have come to an answer is that oaths are made by men, while fate is decreed by the gods, and that oaths are men’s attempts to dictate fate. Yet we cannot decree what we would wish. Making an oath is like steering a course, but if the winds and tides of fate are too strong, then the steering oar loses its power. So we make oaths, but we are helpless in the fate of Wyrd.

Cornwell offers tantalizing glimpses of evidence that the gods might exist, things like portents (a bee sting inspires Uhtred to use the insects as weapons during a siege) and witch-curses that seem to have real teeth. Yet these “visitations from the gods” can be explained by coincidence or natural phenomena, and Uhtred asserts that “we can be certain of nothing… except our weapons and death.” The text bears this out: Uhtred’s aggressive, inspired battlefield tactics more often than not carry the day, not divine intervention.

Reading Cornwell makes you wonder if Christianity is more scourge than savior; you wonder whether which side is “right” in the Saxon-Danish conflict. The Danes view the Christianity as a joyless plague; Christians meanwhile think the Danes destroyers of civilization and enemies of progress. Cornwell offers no clues as to which side is “right.” But in the end the Saxon Stories aren’t about whether one God exists, or many. These stories are really about duty, and the hard slog to what’s right vs. the easy path to wrong. That’s how I see it, anyway.

If Cornwell has any weakness as a writer it’s that he has a tendency to slip into formula. Cornwell has a great conceit in the divided loyalties of Uhtred, which provide a dynamic tension and allow him to portray both Saxons and Danes sympathetically. But I have the sinking feeling that the Saxon Stories may be one Uhtred flip-flop away from jumping the shark. At this point I can’t imagine the Danes taking Uhtred back yet again, or Alfred enduring yet another defection from his beloved warlord. But I expect it will occur.

Despite these faults Cornwell always manages to reel me back in with each new release, be it the next volume in the Saxon Stories or works like his highly recommended Warlord Trilogy, or Agincourt. Cornwell is a natural storyteller and his stories move at a brisk pace, allowing little opportunity for boredom. And he always delivers on the battles. They’re written not so much with clinical descriptions of tactics (though you do get a good sense of maneuvers, and battle lines, and so forth), but rather the shock and confusion of massed men and horses colliding on the battlefield.

Uhtred relays the events of the Saxon Stories as an old man looking back on his glory days, and so the battles are delivered with imparted wisdom, from meditations on the horror of clashing shield walls and the skittish behavior of horses, to the fine line between incautious bravery and the sudden breaking of morale and the onset of panic:

I have seen it so often. A man will fight like a hero, he will make widows and orphans, he will give the poets a challenge to find new words to describe his achievements, and then, quite suddenly, the spirit fails. Defiance becomes terror. Danes who, a moment before, would have been dreadful foemen, become desperate seekers for safety. They fled.

I have enjoyed following Uhtred’s story and learning a little about the real mayhem and murder that occurred in Dark Ages England. And I’m glad that Uhtred will campaign again—Cornwell plans to write at least more entry in the Saxon Stories, and perhaps several more.

*Harald Bloodhair earned his appellation by killing a horse before each battle, then thrusting his head into the dying beast’s abdomen to emerge dripping with gore from beard and hair. Edward Teach with his burning fuses seems pretty bush league in comparison, IMO.

This has been one of the historical fiction series I’ve enjoyed I’ve enjoyed very much. The mid-series volumes faltered quite a bit, though the series picked up again in the following books.

Still, it is more than time for Uhtred to siege Bebbanburg, for the series to conclude.

Since I’ve liked these so much, as well as some of Corwell’s others, I cannot figure out why Sharpe remains of no interest whatsover to me.

I haven’t read any of his Sharpe series, either, though I mean to one day.

My favorite are still his Warlord Trilogy (a retelling of the King Arthur myth).

I liked the Warlord series very much too.