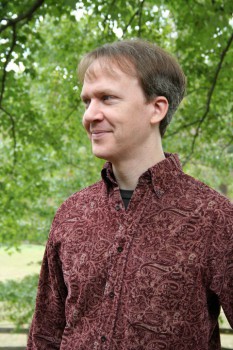 Howard Andrew Jones month continues with no let up in pace. Tuesday Howard published a novel and a magazine review; yesterday he held his first book signing (in Terre Haute, Indiana) and conducted an interview with Black Gate‘s Bill Ward.

Today Howard is the subject of The Big Idea at John Scalzi’s blog:

Neil Gaiman and P. Craig Russel’s brilliant portrayal of 8th century Baghdad (in issue 50 of The Sandman) brought that particular locale into sharp focus for me. Arts, mathematics, poetry, and science blossomed during the golden age of the Abbasid caliphate, while Europe wallowed in the the poverty, illiteracy, and disease of a Dark Age. Yet there were still plenty of blank spaces on middle-eastern maps, filled in by glorious storytelling. Men and women lived ordinary civilized lives, but they knew that the supernatural might lurk in the neighboring kingdom, or around any street corner…

The Desert of Souls came into being as an origin story, not just about how the characters met, but how Dabir and Asim came to depend upon one another. Two men are caught up in events bigger than themselves and in their journey they learn to work together so they have the strength to face a terrible evil. It takes place against the technicolor backdrop of the Arabian Nights, complete with lost cities and sweeping deserts, scheming sorcerers, implacable djinn, and secrets men were not meant to know. There’s romance and heartbreak, swashbuckling action, and hard won victories… In brief, it’s an adventure with the kind of elements I’ve always loved.

There’s no stopping him.  Today Scalzi’s blog — tomorrow, the world.