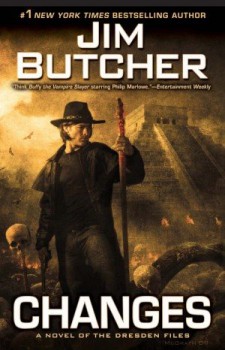 I recently read three more books from The Dresden Files, the popular noir magic series written by Jim Butcher.  And while I quite enjoy them, something was bothering me throughout the books, something that I couldn’t quite identify until I had nearly reached the end of Changes.   And then it struck me.  The noir genre, which these days is predominantly seen in its modern urban fantasy form, is considered to be based on the hardboiled school of American detective literature published in the 1930s.  So, we have a literature based upon the figure of the cynical, wise-cracking private investigator, who fights evil in all its various criminal forms along with the aid of his allies in the police department, who regularly risk their lives and careers on his behalf.

Which leads to the obvious question.  Has anyone, from Mr. Butcher to the writers of the various iterations of the CSI-NCIS-FBI-NY Miami-Las Vegas televised cop drama, noticed that police departments and their relationship with the general public have changed considerably in the last 80 years? Are they familiar with the term “police union”?   In The Dresden Files, successfully investigating a crime or apprehending a murderous criminal in an overly destructive manner is enough to see a cop permanently demoted, while doing a little unauthorized and unpaid moonlighting is enough to threaten a cop’s pension.  On the television shows, simply spending ten minutes doing computer research related to an investigation deemed unnecessary by the department head is sufficient to risk the loss of an officer’s badge and gun.

In the real world, on the other hand, an officer who breaks down the door of the wrong house, slaughters all the pets, and fatally shoots a little girl in the head will be risking a brief unpaid suspension at most.  In many states, there is not a single example of a fatal shooting by police in which the subsequent “internal investigation” did not determine that the shooting was justified.  For example, in South Dakota, the law explicitly permits police officers to commit justifiable homicide if they are “overcoming resistance to arrest, capturing escaped felons, arresting felons fleeing from justice, suppressing a riot or keeping the peace.”  A similar Illinois law would, you will note, permit Officer Murphy to legally massacre half the inhabitants in Chicago given the disturbances of the peace that regularly occur there. In the real world, police detectives regularly maintain multiple case files, run a number of investigations simultaneously, and can even spend the majority of their day surfing for porn on the Internet without anyone objecting.  It is not unheard of for on-duty officers to be caught publicly watching porn in their patrol cars without suffering any negative career consequences.  And the portrayal of police as working class stiffs grousing about their lousy pay is woefully out of date; the average municipal cop in New Jersey makes nearly twice as much as the average New Jersey resident.  In 2010, the median salary for the state’s 20,525 officers was $90,672.  That will buy an awful lot of doughnuts.  Forget the touching pass-the-cup hourly retainers, the fictional SI department could easily put pitch in to put Dresden on a $30,000 salary that would permit him to continue doing the greater part their work for them without the officers feeling much of a financial pinch.

As for police pensions, there is presently some doubt whether even the relevant government’s bankruptcy is sufficient to put them into jeopardy.  Even cops who are convicted of committing multiple felonies don’t lose their pensions; the Police Pension Board in Chicago, (where, you may recall, The Dresden Files are set), recently voted to permit an officer who was found guilty of lying about police torture and sentenced to four and 1/2 years in jail to retain his $36,000 annual pension.

So, much of the dramatic tension underlying the heroic sacrifices made by Harry Dresden’s cop friend Murphy is as nonsensical as it is outdated.  This ahistorical nonsense also reveals the thin nature of the bathos that is often meant to substitute for depth of character in the novel.  It becomes a bit grating when every time Dresden asks anyone to do something for him that we know perfectly well that they are going to do, he is moved to paragraphs of speechless, teary-eyed, heartfelt gratitude.  Even worse is the need to go into two pages of sudden, unconvincing indecision when Harry is given the chance to successfully do what he intended to do from the start.  The bathos reaches new heights in Changes, as we are supposed to believe that Harry cares deeply for a Macguffin that conveniently appears out of nowhere at the beginning of the novel and just as conveniently disappears at the end of it.  Fortunately, Butcher’s plotting is tight enough that the story works in customarily entertaining fashion, even as the reader finds himself quoting the old SNL Churchlady, Harry Dresden-style: “Well, isn’t that conVEEEnient!”

The Dresden Files is also coming to suffer from the disease that inflicts many successful series, as the protagonist fails to grow with his success.  An author simply can’t credibly hope to have the character continuing to play the plucky underdog as the character goes from one skin-of-his-teeth success to the next.  No military series would ever feature a soldier who rises from lieutenant to general while still leading his intrepid platoon into one deadly firefight after another, and yet most urban fantasy series feature characters who become implausibly powerful while still remaining the same quippy scrapper with romantic problems that they were at the start.  Nor would past allies who are now major political figures be informing the general that they couldn’t give him information directly relevant to their core job function because it might “upset the balance”.  (Don’t get me started on that one; there is no single literary concept more eminently stupid than the ubiquitous “balance” device to which so many fantasy authors who either a) lack a reasonable motivation or b) have written themselves into a corner resort.)  Now, there is nothing intrinsically wrong with this arrested character development, nor does it significantly reduce one’s enjoyment of The Dresden Files, but I advise those who wish to write urban fantasy that goes beyond the literary ghetto level to consider putting as much thought into the modern psychological and organizational realities of the real world as they do into magic systems, mythic lore, and the latest weapons.

I totally agree. I abhor CSI. I actually watch NCIS every so often because I think Zeva and Abbie are hot and the shows usually have halfway decent plots (I use the term “halfway decent” lightly here), oh and yea did I mention I’ve got the hots for Zeva and Abbie, oh never mind. Even on NCIS I consistently laugh out loud at their 5 second computer searches to get phone records or cracking some encryption in 5 minutes that would probably take even the NSA weeks to do, if at all. But then I do remember, ah well, it’s fiction, and NCIS does play the supsension of disbelief pretty well. Same thing goes for the Dresden files, decent show, not very believable in reality, but hey, it’s a freakin’ book/series.

But it would be nice to actually have some detective fiction out there that was a little more believable, that didn’t force me to ignore obvious, errr, how should I say it, bullcrap..?

(Even worse, how many people out there do you know who actually think that crap in these crime dramas is based on reality? Scary.)

I agree that the major procedural shows take the suspension of disbelief to incredible levels. However, there are three things that give the Dresden Files a (large) degree of carte blanche when it comes to law enforcement and such. (Note: I have only read through _White Night_.)The first is that it is never specifically said that the action takes place in our reality. All we know is that he lives in Chicago.

Second, Dresden is narrating the books himself and, as we all know, first person narrators are the most unreliable. It could be that Dresden is engaging in quite a lot of revisionist history. Did he really say all the witty things he claims or was it just something that he wanted to put in there to make himself seem more cavalier? (I realize this is incredibly cynical to say so because I absolutely adore the books. And I believe that in one of the later books he states why he decided to tell his story.)

And third, Mr. Butcher has stated that there are going to be at least 10 or so more books in the series. Who knows what’s going to happen to Harry between now and then?