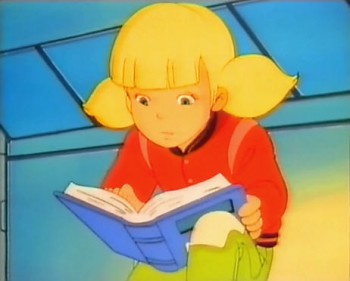 I wonder if elementary school children today have as inspiring a model on animated television shows as I did when I was ten years old. My hero was Penny Gadget from the syndicated series Inspector Gadget.

Why? Because somebody my age, armed with a computer (a proto-laptop disguised as a book) and an amazing wristwatch (able to fire lasers and tracers and whatever else the plot needed) was stopping a massive global criminal enterprise on a weekly basis while the adults around her achieved nothing except looking like buffoons.

Admittedly, in the long view MAD is an incompetently run Evil Secret Organization, staffed exclusively with dingbats who constantly fail to kill an opponent who can’t tell the difference between his own dog and his own dog wearing a wig. Perhaps MAD’s leader, the Blofeld-in-Steel villain Dr. Claw, has some intelligence — he has a Ph.D., apparently, although maybe it was through a diploma mill — but this “evil genius” regularly sees his world conquest plans collapse because of a ten-year-old. A ten-year-old he occasionally captures but never recognizes. Yeah, I’m going to go with “diploma mill.”

Inspector Gadget has an enormous online fanbase that follows it through its various incarnations, such as the follow-up animated series Gadget and the Gadgetinis (where Penny borders on levels of technical accomplishment that should have allowed her to crush Apple and Microsoft), video games, a CGI animated movie, and the two awful live-action films. The Gadget fans agree that Penny was one of the reasons the show succeeded, balancing out the slapstick action with a real espionage/adventure storyline. One fan took the step of using the “Garfield Minus Garfield” technique to create edited episodes of Inspector Gadget with Gadget entirely removed, making them into Penny Gadget Beats Those MAD Morons Again. It is amazing how easily Gadget slides out of his own show. He’s there for the laughs and the celebrity voicing of Don Adams, but even at age ten I was more interested in the serious intrigue and spy action of the show; I was on the verge of becoming a hardcore James Bond fan, so it made sense that the genuine danger of stopping world-conquering plots got my interest more than watching a cross-dressing dog prevent a malfunctioning cyborg from getting killed by an insane yodler. (I didn’t make that up; it reads more interesting than it plays.) 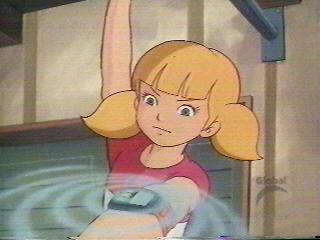 There is realistic empowerment in a character like Penny, despite the fantastic elements of the show. She’s intelligent but under the radar. She lives in a world of adults, and they expect certain behavior from her. She outwardly delivers that, knowing that the adults need the affirmation of their role as protectors. However, she’s better than the adults. Not only does she have a strong sense of right and wrong that comes through in her dedication to stopping MAD and preserving her uncle’s life, but she’s technically more skilled and more investigative. She’s also brave beyond belief, jetting around the world to exotic and dangerous locations on her own. The show occasionally makes nods to Penny having to go to school — her teacher named Mrs. Block-and-Tackle shows up in one episode to give her a crushing load of homework to complicate her current adventure — but otherwise she has unlimited power to dash across the globe whenever she needs to. Come on, how damn awesome is that if you’re a ten-year-old? The Hardy Boys have nothing on this girl, and the Scooby-Doo gang are limited to trucking around in the Mystery Mobile and donn’t have compact computers capable of hacking any security system in the world. Penny Gadget was, far and away, the coolest person my age on TV at the time.

There is also a “nerd factor” to Penny Gadget that connected with the state of personal computing during the early ‘80s. Today, the tech-wired kids are the cool ones. It was the opposite when I was in elementary school: computer knowledge or love of books got you teased or even bullied. I suffered from both because I loved computers and reading far more than sports or bicycles or race cars. To me and other young early adopters of the personal computer, Penny was “Nerd Empowerment” supreme. And she was prophetic as well, since now all the kids are armed with miniature computer communication devices. But how many of them have the guts (and the plot conveniences) to go out and save the world every week? Huh? Huh? Kids these days, I tell ya.

Looking back on Inspector Gadget through the episodes streaming on Netflix, I’ve come to realize that 1) it is very repetitive and formulaic and consequently doesn’t hold up well for an adult viewer, and 2) Penny Gadget’s character embedded itself in my brain and emerged in my writing without my knowing it. I have recently gone through revisions on a science-fiction novel I wrote two years ago, and I realized that my heroine, a sixteen-year-old girl from a genetic slave colony world who outwits her captors, had a huge dose of Penny Gadget in her. I have written a lot of young heroines — I lean toward Young Adult literature in my novels — and their independence and skill may have their origins in the stew of my brain in an ‘80s animated character. 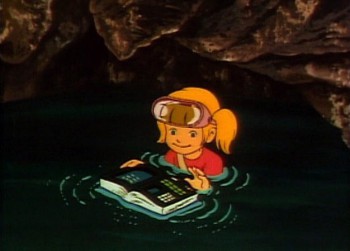 I was not conscious of this until I found the Inspector Gadget episodes on Netflix Instant. I had not given much thought to the show since I stopped watching it as a kid. But it makes sense to me when I think about my childhood with Apple //e and Commodore 64 that Penny Gadget joined the pantheon of heroes in my head that later turned into my own characters. She was an early lesson in writing the kind of heroes that I love to create… as well as a way to cope with a difficult elementary school life.

Penny has appeared in most of the later incarnations of the show, but the first season version (voiced by Cree Summer, who has gone on to be one of the most in-demand voiceover artists in North America) remains the classic one, and one of the few elements of the show that still works for an older viewer.

Final word: In the process of writing this post, I realized how MAD developed into the hopeless Evil Secret Organization seen on screen. No natural selection. SPECTRE cleans out its employees on a regular basis. Make one mistake, you’re exploded, electrocuted, poisoned, or thrown to the piranhas. MAD, restricted within the rules of children’s television, has no option to kill off its bungling henchmen, and therefore never had a chance to grow as an organization with superior replacements. (It might help if MAD stopped dressing its operatives in shirts that have HENCHMAN written on the front, or putting its logo on everything in sight during a covert operation. Just a suggestion.)

Now I have the Inspector Gadget theme song running through my head.

I’d FORGOTTEN her cool computer book. And the way she was always saving her uncle. He was her uncle, right?

Yes, he was her uncle. Where her parents were was never explained, or how she got her gizmos, or why Gadget was a cyborg, or why Metro City Police had world-wide jurisdiction, or . . .

Well, there’s a reason this show got so much fanfic. Numerous gaps to fill in.

Probably because I never saw the cartoon. Maybe it wasn’t broadcast in Ottawa when I was growing up.

It should have been in Ottawa, since it was a Canadian-produced show. (Well, French-Canadian; as a child I wondered why there were so many French names in the credits. I excepted the Japanese names, but not the French ones.)

Growing up we couldn’t afford early computers, but I was *still* enamored by Penny’s nerdiness – I even made my own version of her computer book with a cereal box.

Dr. Klaw, BTW, actually has a dual Ph.D. – in catstrokery and facehiding.

I think he did more “catsmashing” than “catstrokery.” I remember one episode where Madcat got so tired of getting knocked off the table when Dr. Claw bashed his fist onto it that he tied Dr. Claw’s arm down to the chair.

Penny really was the heart of the show. She was much more competent than her uncle.

Except during the short public service tag they put at the end of each show. Then she was uncharacteristically ignorant while Gadget got to play the wise adult.

Yeah, even as a kid, that bothered me.

Yeah, the PSA stuff was always idiotic. Gadget as the model of a responsible safe adult? (“Penny, don’t leave your bicycle in the street,” was the message of one I just watched.) It would have been fun if Dr. Claw had delivered the PSA material. (“When hiring thugs, always request a background check for mental illness, eh Madcat?”)

[…] This post was mentioned on Twitter by tweetgadget, Cho Pei Chin. Cho Pei Chin said: Black Gate » Blog Archive » Nerd Empowerment Role-Model: Penny Gadget: It was the opposite when I was in element… http://bit.ly/dMBwtk […]