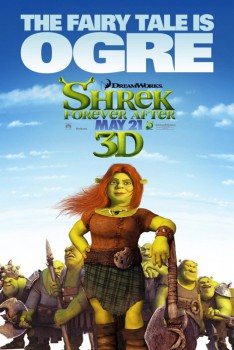 Last week, I discussed my favorite fantasy films of 2010 and realized that, surprisingly, they were overwhelmed by young adult films, and even animated ones. And this isn’t just because I have two young kids, it’s because they’re actually making some of the best films out there for young adults.

Maybe they always have and I just didn’t notice, because I was part of the demographic they were aiming at. But as I approach the age where I’m constitutionally-permitted to run for President, it’s clear that these movies are being made without my thirtysomething self as the intended target … yet somehow they’re resonating very well with me, in ways that the films which are being made for adults don’t seem to.

One film which didn’t make the list was Shrek Forever After, and that was for a simple reason: I hadn’t seen it.

Well, I took care of that late last week … and it certainly needs to be added. I swear, between Shrek Forever After and How to Train Your Dragon, Dreamworks might actually give Pixar a run for their money at the Academy Awards this year. (Although, once again, I must rant: Would it kill Dreamworks to include a digital copy of the film?)

I enjoyed the first two Shrek films, but Shrek the Third left me (and most people, I think) feeling that it was best to just drop the premise. The franchise was becoming a caricature of a parody, which translates into just … a mess.

But instead of actually letting the show end on such a weak finale, they realized that there was actually a storytelling element which was left dangling. Shrek needed to embrace the various changes that had taken place to him over the previous three films. Consider Shrek’s role in each of the films:

The problem, of course, is that Shrek isn’t alone anymore. He has a lot of friends, people who have been by his side through all these adventures, and whom he repeatedly treats like he can’t stand. (This aspect of Shrek’s character is also well demonstrated in the half-hour Christmas feature Shrek the Halls.)

Shrek is still the same grump that started the series, despite everything that’s happened. In order to actually complete the series, they really need to resolve the core issue: Shrek has to become happy with his life.

Enter the It’s a Wonderful Life rip-off, a plot device which actually works in this case. The writers actually convincingly contrive a situation wherein Shrek is tricked by Rumplestiltzkin into never having been born. Therefore, he doesn’t meet Donkey, rescue Fiona, have kids, or any of the stuff that happened in the first three movies.

And, if Shrek doesn’t fix things in a day, he’ll cease to exist.

By stripping him of everything that he’s taken for granted in the last three movies, it becomes clear to Shrek that he’s been a royal pain to everyone … including Fiona. He realizes that Donkey has actually been a valuable ally, despite his many annoyances. All of the companions he’s rejected real friendship with are sorely missed.

Everything about the film is well-constructed, from the set-up and Rumplestiltzkin’s trick to the finale and the way the “escape clause” is handled. All the standard fairy tale jokes are still there, but because the reality has shifted, they gain a fresh new appearance.

One of my favorite examples is the Gingerbread Man, who fights in a (very small) gladiatorial arena against animal crackers.

It’s clever little adaptations like this which bring the charm of the original film back in full force. If you ever enjoyed the Shrek films, this final installment will remind you why. The series ends with the feeling that there’s really nothing left which we need to know about Shrek. His life may not be perfect, but it’s good and, more importantly, he realizes that it’s good. His story is done now. The viewer is satisfied.

Dreamworks still isn’t done with the world they’ve created, though, as attested to by the prequel they’re planning, Puss in Boots.  Hopefully it will keep the fresh approach of this latest film instead of just feeling like they’ve made a Shrek the Fifth … without the Shrek.