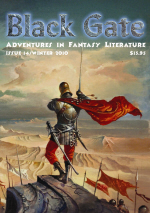 Over at The Elephant Forgets, Rich Horton continues with his review of every science fiction and fantasy short story published in Engish in 2010 (I know — wow.) On December 30th, he reached Black Gate:

Once again, Black Gate managed only a single issue in 2010, though also once again one more is nearly ready and presumably will appear early in 2011. It remains a beautiful thick magazine — and 2010’s issue was particularly thick! — with a strong and successful focus on adventure fantasy, and with a welcome (to me) tropism towards longer stories. The magazine also has a tropism towards series stories, but this issue mostly avoided sequels. This year the one issue includes 19 new stories: 1 novella, 8 novelettes, and 10 shorts (1 short-short), for a total of almost 160,000 words.

I will mention again that I am on the masthead of Black Gate as a Contributing Editor, which means that I contribute a regular column and regular reviews, and also, I suppose, that I meet with Publisher/Editor John O’Neill occasionally and amidst eating and drinking and selling books we chat about the future of the SF industry and so on.

My favorite story this year was Matthew David Surridge’s “The Word of Azrael”, which will appear in my Best of the Year book. It’s a first rate story that manages to both satirize numerous fantasy cliches and to celebrate them. Other strong stories include the novella, Robert J. Howe’s “The Natural History of Calamity”, which is basically Urban Fantasy, but with quite a clever central idea, a private detective with a difference: she detects what’s wrong with someone’s “karmic flow”, and restores the balance. Also strong was “Devil on the Wind”, by Michael Jasper and Jay Lake, concerning a group of magicians whose power arises from their own suicides (and revivals). Add strong work by James Enge, Pete Butler, Alex Kries, and Sylvia Volk — another very enjoyable issue of an always fun magazine.

5 of 19 stories (26%) are by women, a bit less than usual. Though they have published SF stories in the past, despite the Adventure Fantasy label, this year I don’t think any qualified.

Rich selected Matthew David Surridge’s “The Word of Azrael” for his Year’s Best Science Fiction & Fantasy 2011 Edition. His assessment of Black Gate in 2009 is here.