Ascension: Chronicle of the Godslayer is a deck-building game from Gary Games. “What is Ascension?” you may ask. Here’s a quick intro from the Ascension website:

Ascension is a fast-paced deckbuilding game that’s quick to learn, easy to setup, and packed with endless hours of replay value! Our goal with Ascension was to make a game that we would bring out again and again for our own game nights. With an all-star team working on design and development, including Magic: The Gathering Pro Tour Champions Justin Gary, Rob Dougherty, and Brian Kibler, we spent the better part of a year making a game that will appeal to fans of the board games, trading card games, and non-gamers alike.

It’s also useful to have a bit of the background for the world in which the game is set. Again, from the Ascension website:

The game takes place in Vigil, a world that has been protected for millennia by the Great Seal, keeping the realm free from divine influences. It was put in place after an ancient war with a corrupt god, Samael the Fallen, when it was decided that none of the gods should be able to interfere. But now, the Seal is failing, and nightmarish Monsters that had been forgotten are breaking through. Your job, as a hero of Vigil, is to take your small, ragtag band of Apprentices and Militia, and gather an army powerful enough to lead you to your destiny as the Godslayer, and in doing so, slay Samael once and for all.

The next obvious question is: what is a deckbuilding game? Deckbuilding implies that you do not start with a predetermined deck, i.e. one of your own choosing before the game begins. Rather, you begin with a starter deck and customize your deck through the course of the game, hopefully in such a way that allows you to outplay your opponents, who are customizing decks of their own.

This is a very enjoyable aspect of Ascension, because although everyone begins with the same cards in their decks, you can tailor the deck to your style of play as the game moves forward.

It’s not so simple as choosing a strategy and acting on it, however. The game has several mechanics that may force your best laid plans into the ditch. First of all, the cards available to you are pulled from a single, common deck. When it’s your turn, you have six cards in the common area (called the center row) that you can act on as one of the heroes of Vigil. You can defeat and vanquish a monster by utilizing Power from the cards in your hand or in your play area, or you can summon help by spending Runes. You cannot, however, always predict what might come up in the deck, and because of the random nature of the cards available, you can’t always predetermine your strategy. 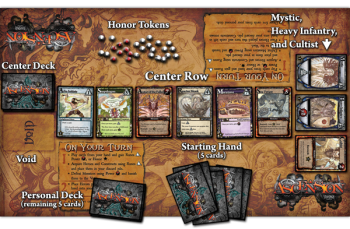 Also complicating your strategy is the fact that all players are building their decks from that very same center row. You might find a card that would be perfect for your hand, but other players might have the same idea, and they might get it before you do. The fact that the field is constantly changing, and that you have to change with it, is a clear strength of Ascension. It makes the game different every time, and it also forces you to change as you play more games.

Why? Because techniques that win will be adopted by other players, so a strategy that you use in one game may not work in the next.

Ascension is varied enough to keep gameplay interesting over time. There are Heroes, as mentioned above, that you use to grow your deck, and those Heroes fall into one of four factions: The Enlightened, The Mechana, The Void, and The Lifebound. Each faction has certain types of powers and abilities that (in theory, anyway) complement one another. You can also forego the deckbuilding strategy (at least partially) by focusing early on cards that give you power so that you can kill the monsters that appear in the center row.

Which leads me to the goal of the game. The player with the most Honor by the end of the game wins. You get Honor by defeating Monsters. There are Hero cards that give honor but the lion’s share are found by gathering enough power in your hand to defeat Monsters, each of which give you a certain amount of Honor tokens.

And here’s another key mechanic in Ascension: the number of Honor tokens available is static, but because you can’t predict how many Honor tokens will be taken each turn by the players, the length of the game is not static. Rather, it varies based on how quickly the players collectively burn through the center deck and how effectively they manage their decks.

As I mentioned above, during your turn you can either burn Runes to get new cards or you can burn Power to kill Monsters. You can do both, but each turn is built in such a way that you’re often building your deck for one or the other. The only way to win the game is to kill Monsters, but the Monsters are tough, and so you need to build a more powerful deck. But as you’re building your deck, your opponents are taking monsters and getting closer and closer to winning.

It’s a delicious combination: this constant struggle of “do I tweak for power” or “do I tweak for runes.” And the great thing is that there’s no single answer even within a single game. Early on you’ll want to build your deck, and to do that you’ll need to get some more powerful rune cards, to the detriment of your power-unleashing ability. Later in the game, however, you’ll need to forego the rune-building tactic and move to the power-building tactic instead, and the point at which you do this is one of the key decisions of the game. 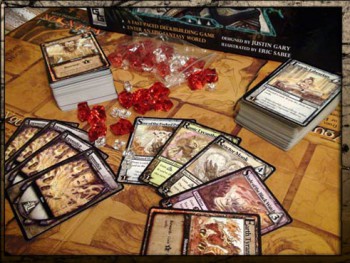 Gameplay is fast and dynamic. It keeps one’s interest, not only during the first game, but as you learn more and more about the rules, the cards, and the strategies you can employ. You may not have as much flexibility as you do in collectible card games, but then again, you’re not shelling out hundreds of dollars for the game, either. And the nice thing is that one person can buy the game, and you have all you need to play with up to four players.

Is the game perfect? No. One gripe I had was that the various factions didn’t complement one another as much as I thought they might. That is, if you focus closely on The Void, you may find yourself a bit limited in terms of your abilities throughout the game. I’m assuming the game designers wanted you to gather a variety of factions throughout the game, but in the end I found that this starts to take some of the individuality away from the factions themselves. At the end of the day, the factions are not like warring houses or different disciplines, a la Magic: The Gathering. Rather, they are shades of the same color. They do largely the same thing: help you to gain new cards with Runes or help you to defeat Monsters with Power.

Another thing I’m not so crazy about is the deck culling features of the game. There is a power called Banish in the game, which allows you to get rid of some cards as you build your deck. The cards are fairly rare, and so most players will end up with big decks by the end of the game that are progressively bulky and unable to execute your chosen strategy. Anyone who’s played M:tG and built a deck as tall as a house knows exactly what I mean. I realize the designers consciously limited this ability to certain cards so that players would war over them, but still, I’d love to have a rule that allows you to Banish without a card but forces you to pay Honor back to the central pool to do so. In fact, that’s exactly the house rule I’m going to implement the next time we play.

One more thing I’ll mention on the negative side is the lack of cards that allow you to mess with your opponents. One of the great things about many CCGs is that there are tons of cards that let you tie your opponents shoelaces and let you laugh as they trip into the mud. In Ascension there is a real dearth of such cards. When I bought the game at GenCon from the gamemakers themselves, they said they were planning on expansions, so I certainly hope this is one of the aspects they expand upon.

Still, minor gripes aside, this is a great, easy to learn, fast-moving game with lots of replay potential. As you learn the game and the cards, you’ll start to find more synchronicity between the various cards and factions, so your appreciation (not to mention your ability to win) grows the more you play. If you’re fairly rigid about pre-building decks and playing in that way, this might not be the game for you, but many will find this an extremely enjoyable game with lots of flavor and laughs to pull out on game night.

Bradley P. Beaulieu is the author of The Winds of Khalakovo, the first of an epic fantasy trilogy due in April, 2011. For more, please visit www.quillings.com.