You’ve probably heard about Marvel Comics’ latest big movie sensation, THOR, coming soon to a theatre near you. You may know that Anthony Hopkins is playing Odin the All-Father, Natalie Portman is involved,  and the great Kenneth Branagh is directing in a feat of Shapespearean brilliance.  You may be convinced (as I am) that this will be the best “comic book movie” since SPIDER-MAN.

Well, forget all that and pick up the latest issue of Marvel’s THOR comic.

Writer Matt Fraction and artist extraordinaire Pascal Ferry took over the title a few months back and Asgard may never be the same. It has quickly become one of Marvel’s best books. For fantasy lovers of all stripes, this is THE monthly book to buy into. Ferry’s art is truly amazing, a blend of fantasy and science fiction that creates its own unique style while hearkening back to the original Jack Kirby THOR designs with an amazing energy. The panels fairly leap off the page. 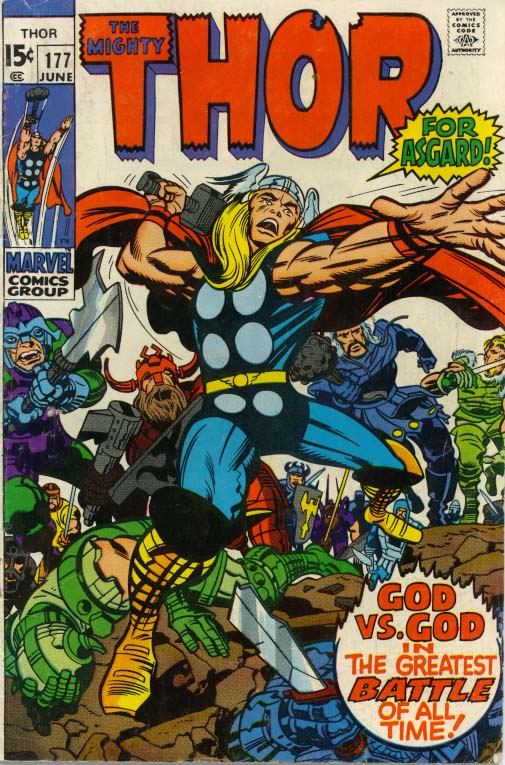 A little context: I am a huge fan of the old-school Stan Lee/Jack Kirby THOR run from the 1960s. Not the entire run, mind you, just the really good second half when Kirby was really off the hook. The Origin of Galactus, Ego the Living Planet, the ManGog, Tales of Asgard, just amazing and timeless Kirby goodness. There’s a reason this guy was called the King of Comics, and this series shows it like no other.

I also love the run that followed Kirby’s departure, the early 1970s run by the legendary John Buscema, who brought a whole new lithe and streamlined style to the Thunder God and his cast of friends and foes. Anybody into THOR will also tell you about the landmark Walt Simonson run of the early 1980s; this was the run that brought Thor back to the top of Marvel’s list.

A few years ago Marvel brought Ragnarock down on Thor’s head and destroyed everyone in Asgard, then J. Michael Straczynski and artist Oliver Coipel relaunched Thor and resurrected the Asgardians in a truly inspired run that ended recently. Now there was a reason to read the THOR book again, and it was good. This creative team left Asgard displaced in time and space, floating over the open fields of Oklahoma. Now, Fraction and Ferry have taken the ball and run with it. It’s the most cosmic and mythic book Fraction has yet written in his red-hot career, and it’s the wildest, most bombastic art Ferry has done in a career full of spectacular comics. 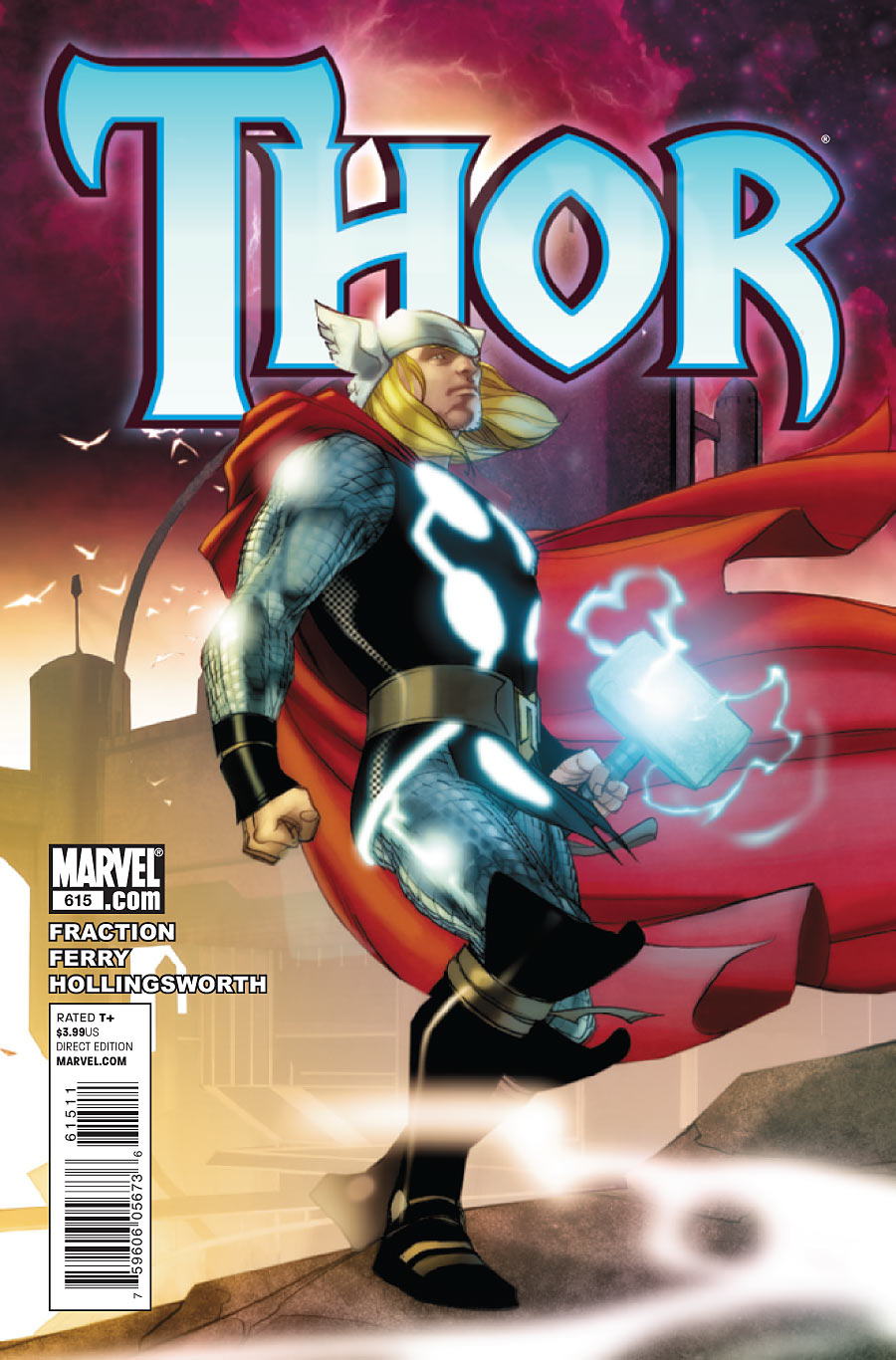 So when I say that this new THOR run is not to be missed, be sure that I’m an old-school fan who is not easily impressed. There is a feeling with the new run that the kid gloves are off…that Big Things are in the offing…that universes are colliding, the Great Cycle is beginning again, the World Tree is collapsing, and Asgard is facing its darkest hour. And in this week’s latest issue, the greatest return of them all has happened…it was inevitable…Odin is back!

Thor, who brought all the slain Asgardians back to existence during the Straczynski run, has finally done what he refused to do: Bring his all-powerful father back to life! And if the look of next month’s cover is any indication, Big Daddy Odin is NOT going to be happy about being robbed of his eternal reward. However, I’m betting that after the Thor/Odin slugfest that is bound to ensue, Asgard just might have a fighting chance now that Odin is back. I, for one, am ready to see the Golden Realm take back its place in the cosmos. It was fun for awhile to have a city full of immortal gods floating over the American Midwest, but it’s time to get Asgard back to floating in the cosmic depths of space.

I get the impression that Fraction and Ferry are going to restore order to the Asgardians’ world…after they unleash absolute chaos with a whole new crew of extradimensional baddies. These new villains are conquering realm after realm, rising up the World Tree toward Asgard—which is now on earth—and when the battle begins it promises to be legendary.  And what better to restore the Gods of Asgard than an epic battle? 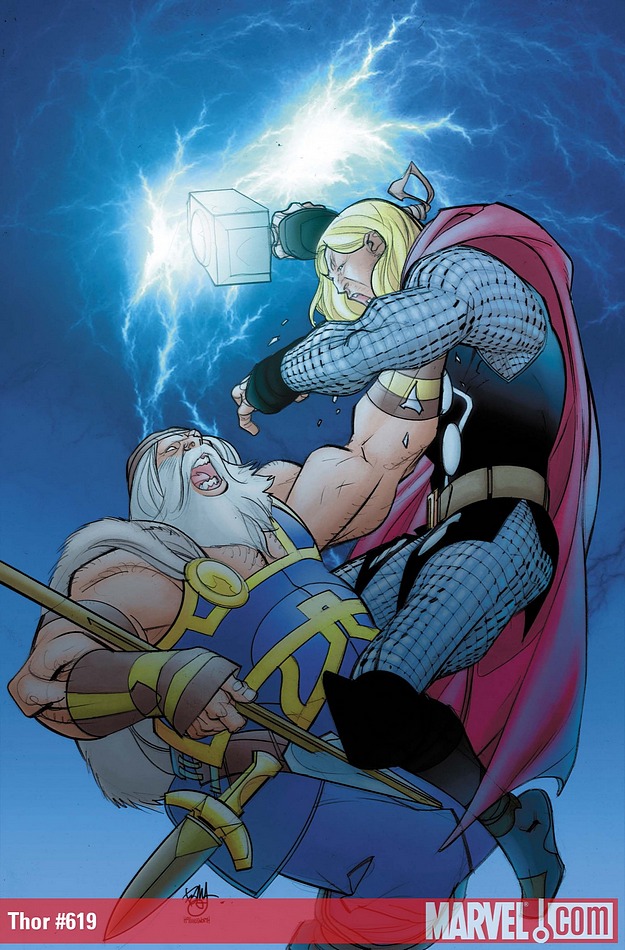 Jack “King” Kirby would definitely be proud if he were alive to see what Ferry’s doing with Thor, Odin, and the Asgardians…all his most fantastic concepts and myths. As good as the forthcoming movie looks to be, the comics are really what it’s all about. It’s good to know that Marvel is capitalizing on its successful spate of movies during the last decade by bringing quality talent to their main books. Comics are only as good as the creative teams that put their ideas to paper.

The Fraction/Ferry team is definitely one to watch.

This is good to hear. The only previous review of Fraction’s Thor I’ve come across so far was … well, less than glowing. You can read the thing in its NSFW glory here:

Anyway, I haven’t read Fraction’s Thor yet myself, though I like what he did with Iron Man. And of course I love Kirby’s Thor and Simonson’s Thor. No debate that Kirby’s stuff got so much better as it went on; but then that’s the charm of the early stuff, seeing him and Lee work out what it was they had and what they could do with it, and seeing them take a story that begins as a retelling of Little Red Riding Hood (with Idun as Red and Fenris as the Big Bad Wolf) and gets to the point where a magical battle-axe “slashes through the very fabric of infinity itself” to exile the villain in “the seething, shadowy land of the lost, which lies near the netherworld at the farthest reaches of the endless cosmos!” — I mean, that’s just brilliant. And so totally Kirby.

I have to admit, though, I had mixed feelings about the JMS run. Technically it seemed sound, but … getting rid of Asgard and the framework of the Nine Worlds seemed to impoverish the Marvel Universe overall, you know? There was a bit less wonder, a bit less mind-boggling strangeness in the world — and Marvel generally has not been good over the past twenty or thirty years in generating new strangenesses. (Plus, though I like much of his art, I cannot get my head around Coipel’s redesign of Thor’s costume. I know it’s supposed to be quilted armour, but it looks like sequins to me.)

All of which is to say that at some point soon I’m going to have to take a good look at Fraction’s Thor, and now I have some reason to be optimistic. Thanks!

A splendid review, sir. I’m making my weekly run to the comic shop today, and will take your advice and try the issue!

is Pascual Ferry the spanish artist?
maybe because I have read only a few comics of Thor I tend to prefer some stories I read as a child the first eighties issues by Alan Zelenetz with a Thor less cosmic and more located in NY city and with enemies like The crusader

Yes, Pascal Ferry is Spanish. He is fantastically talented. I tend to be the opposite on Thor, Francisco–I prefer him against an Asgardian/cosmic background. When he’s in the mundane world I feel the character loses some of its charm. However, good writing and good art can make either setting work well. Fraction and Ferry are doing that nicely.