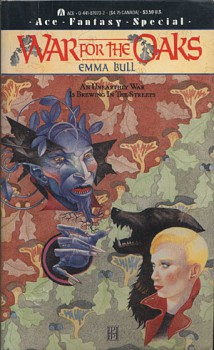 Thematically, War for the Oaks by Emma Bull has a lot in common with Charles de Lint’s Jack the Giant Killer, which also appeared in 1987 (and which I reviewed here.) If I’d known exactly how similar they were, I’m not sure I would have picked it to review for a few months yet. Still, it’s a good book, and I’m glad I got a chance to read it.

Eddi McCandry, guitarist and singer, is about to leave both her old band and her boyfriend, the lead singer. She’s ready, she thinks, for a normal life. It’s a plan that falls apart in only one chapter; the fey need a mortal presence to witness their upcoming war, and they’ve chosen her.

In short order, Eddi is stalked by a man and chased by a huge dog, insulted by a woman made of water, drafted by the Seelie Court, and saddled with a constant guardian: the man-dog shapeshifter who herded her into the encounter.

To make matters worse, Eddi finds out that she has to stay under surveillance for at least half a year so that the Unseelie Court can’t assassinate her. Her watchdog is a phouka who enjoys living up to his trickster roots, and keeping a regular job would be impossible with him following her everywhere even in the unlikely event that he decides to behave himself, so Eddi bows to the inevitable and decides to start a band. 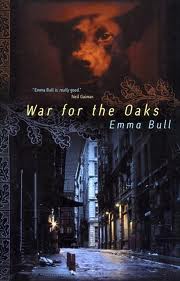 A surprisingly large amount of this story is set in the mundane world. It’s even more surprising because the band doesn’t stay unaware of faerie for long; like Jacky, Eddi’s first instinct is to tell her best friend (and new drummer) Carla.

War for the Oaks is a much more leisurely story than Jack the Giant Killer, so the story of Eddi’s band coexists with the story of the faerie war without messing up the pace. There’s also a romantic subplot which requires time to develop.

I felt that the breathing space and the human interaction lent a lot to the story, but if you’re uninterested in music, the emphasis on Eddi’s band may grate. Music runs all through this book. The chapters are named for songs.

This is also a darker story than Jack the Giant Killer. This Seelie Court is certainly better for humans than the goblins and redcaps of the Unseelie Court, but that doesn’t mean they’re nice. The nobility have a nasty habit of enchanting their inferiors to do what they want, and when they say “inferiors” they mean everybody.

They don’t need Eddi as a hero. They need her because, after a few spells, her mortal presence makes it possible to kill other fey. Together with the Unseelie, they have scheduled a very real and nasty war as if it were a social get-together.

And none of them is willing to tell Eddi a thing – except the phouka, who bends a number of serious rules each time he does, and may or may not have Eddi’s best interests at heart. 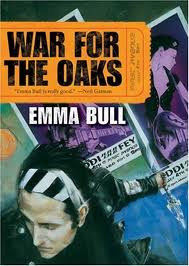 Eddi does not start out as a hero so much as a captive pawn, and the story revolves around her quest to regain some control of her destiny. That, as much as the plot, is the reason why Eddi’s band is so important; she has to move from dancing to someone else’s tune, whether her ex-boyfriend or the faeries, to creating her own music.

There’s one element of the book that I know is going to work for some people and not others: the lyrics. When Eddi and her band perform an original song, lyrics are generally provided. I’ve read at least one blogger who points out that portraying great art in fiction is a tricky business, often best accomplished by keeping the art offscreen. I’ve also heard it said that writing songs into stories is a lost cause, since they’re missing the melody, the harmony, and the beat. I was okay with the lyrics in this book, but I can’t say they especially moved me.

Aside from that though, the writing is clear and vivid. Traditional faerie lore is nicely utilized and integrated into the plot. Eddi is a likeable protagonist. The phouka is clever and interesting, although he’s one of those characters a person might want to strangle in real life.

It’s worth noting that he goes through the entire story without getting a name of his own, but that detail doesn’t derail the writing; I find that impressive. All in all, this is a great book if you like music and urban fantasy.

I just met Emma Bull this weekend at LOSCON and had her sign my copy of War for the Oaks. Fun and very friendly woman.