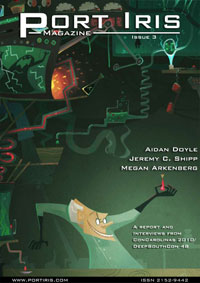 Kerstan Szczepanski responds to our recent post on the latest issue of Port Iris magazine:

I don’t know much about Port Iris beyond what I’ve seen in issue #3. A little too alternative for my taste. Although Aidan Doyle’s Salary Ninja was pretty good (“When I was young, if a demon had a blue tooth, it meant something different.”); if that guy submits anything to you, read him right away. And the cover makes me think of Tex Avery, very cool.
I’ve been a long time subscriber to Black Gate since issue 3 or 4 or something, absolutely love the mag.

I had never read your magazine until about a year ago. A friend from work brought in a copy and I burned through it in about two days (my job has a lot of down-time, heh). I am continually impressed by your organization — fantasy magazines seem to be dropping like flies lately, but you guys are hanging on. I’m glad there is a magazine out there still willing to print the sword-and-sorcery and adventure fantasy stories that are the real bedrock of the American fantasy tradition.
It seems like every time I check your guys’ webpage for when submissions are open, you aren’t accepting submissions. I realize the market is probably glutted with good adventure fantasy for you guys to choose from, but is there any reliable time when you guys are accepting submissions? Like, say, any specific time of year? If not, that’s cool too. Just curious.
Anyways, keep up the great work. I love the magazine!

We last opened to submissions in the summer of 2010, and to be honest we were deluged with manuscripts. While we’ve now returned most of them, we’re still reading the last of those submissions, and expect to be for the remainder of the year.

We’re likely to remain closed until we can work out a reliable system to better cope with the volume of submissions. We don’t know yet when that will be, but we hope it will be within 18 months.

Judy Heberger tells us how she discovered Black Gate:

John,
I knew about Black Gate because you are the one who had bought so many science fiction/fantasy books from me on eBay over the past couple of years. The books came from an elderly gentleman named Mike that loved SF/F like yourself, and because he had to go into a nursing facility where he could not take all of his books I thought your magazine would be a great substitute! I know he will be thrilled to receive some copies.
I am thankful that Mike’s books went mostly bought by you. You both have kindred hearts when it comes to Sci-fi/fantasy. I know he will love the books/magazines when he gets them. How can he not?

It’s letters like that that melt my heart.  Thank you, Judy.

I heard about your magazine from Martha Wells’ blog some years ago. She had three stories (in issues 10, 11 and 12) published with you, so I got a four issue subscription and enjoyed it immensely. Since then, I’ve been moving an awful lot (my mum has stopped writing my address in her address book, even in pencil, and resorts to sticky notes instead), so getting mailed copies wasn’t practical. I know you have digital versions, but they aren’t nearly so nice as something I can hold in my hands.
I’ll let you know how I like the new issues when I get them. My father, who does not normally read fantasy, also has also very much enjoyed them.

Do you pay Canadian writers and accept Canadian submissions?

Only during the colder months, Natalie.

Be honest now John: while you do accept Canadian submissions, you don’t pay Canadians! My God, man! 🙂

I don’t even remember where I first heard of Black Gate, but I’ve been subscribed since the very first issue. Did you send solicitations early on to people who had subs to other fantasy mags, because that seems the most likely route, or perhaps ads in one or more of those mags?

I don’t know what you’re talking about. I write Rogue Blades Entertainment (RBE) letters all the time!

We don’t have that many subscribers who go all the way back to the first issue… trust me, no one had heard of us back then. Thanks for all your support.

We haven’t done any swaps for mailing lists with other magazines, chiefly because we don’t do a lot of mail solicitation. We’re primarily relied on the internet to do most of our marketing and advertising, and so far it’s worked out well. The BG website receives over 50,000 visits/month (and growing rapidly), which brings in a lot of new subscribers.