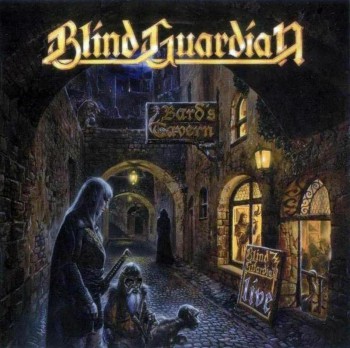 To the gods of the north, I pray
And raise my cup for the fallen ones
Then I cry
In Valhalla they’ll sing

As a life-long heavy metal fan who also loves fantasy literature, it was only a matter of time before I got to the subject of Blind Guardian. About all you need to know about this wonderful, semi-obscure German metal band is that they wrote an entire album about J.R.R. Tolkien’s The Silmarillion (Nightfall in Middle Earth).

Need I say more? I mean, look at the picture I’ve embedded — that’s a Blind Guardian album cover, and it looks like it could have been plucked off the cover of a Robert Jordan novel.

I’ve always been drawn to heavy metal for its power and grandeur. Narrowing that down further, I prefer bands with a clean, epic sound and soaring vocals. Even more specifically, I prefer those metal bands whose subject matter covers the fantastic, be it dark magic and the occult (Black Sabbath), medieval/ancient history (Iron Maiden), or sci-fi (Judas Priest and “The Sentinel,” “Electric Eye,” etc).

Blind Guardian fulfills all those requirements. To get an idea of what they like to sing about, all you need to do is view some of their song titles, of which I’ve included several in the below list. Note that Blind Guardian doesn’t just make oblique or occasional references to Tolkien, King Arthur, Dragonlance, etc, like other bands have done (Led Zeppelin’s mentions of The Dark Lord and Gollum from “Ramble On” spring to mind), they write songs–nay, entire albums–about fantasy, without a hint of satire:

I’m not making this stuff up, folks. These guys are hard-core fantasy fans. Their music may as well be the soundtrack of a Dungeons and Dragons game.

In a lesser band’s hands, the combination of long hair, electric guitars, and some German dude yelling “Mordor–dark land under Sauron’s spell” could be embarrassing, but Blind Guardian is able to pull off this material successfully and with a straight face because a) They’re passionate and obviously well-versed in the material; and b) They’re damned talented.

Don’t believe me? Check out this clip of one of their acoustic numbers, “The Bard’s Song,” on Youtube. You won’t be disappointed.

The bard’s songs do indeed remain alive and well in the capable hands of Blind Guardian. 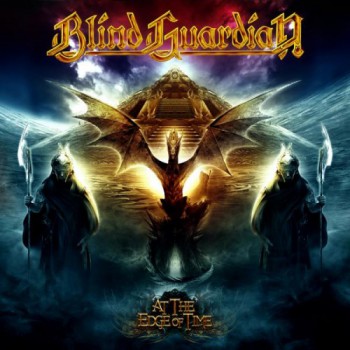 Many other bands have jumped on the power metal path blazed by the likes of Manowar and Blind Guardian. You can’t swing a short-hafted axe these days without striking a Kamelot or a Battle Beast, it seems. But Blind Guardian has been in it for the long haul and their passion for metal-infused fantasy has not faded with the passage of years. They just released their ninth studio album, At the Edge of Time, in which they’re back at it again with more fantasy inspired songs. “Tanelorn” is about Michael Moorcock’s albino hero Elric and his dark sword Stormbringer; “War of the Thrones” is about George R.R. Martin’s grim, sprawling, and sadly unfinished A Song of Ice and Fire series; and “Wheel of Time” concerns the series of the same name by Robert Jordan (which I tried to read, but could not force myself through the first telephone book-sized volume). “Valkyries” (one of my early favorites) is pretty self-explanatory.

So far I deem At the Edge of Time another excellent album; not at the level of a Nightfall in Middle-Earth or Imaginations from the Other Side, perhaps, but the next tier down. In particular I’ve taken a shine to “Curse my Name,” a medieval-style ballad complete with pipes and snare drums. Very awesome and catchy, and I can already hear the European crowds belting out “Curse my Name” along with lead singer Hansi Kürsch.

If I seem a little Blind Guardian-giddy, well, it’s because for the first time in my life I’m going to see them in concert. On November 21 they’re coming to my neck of the woods at the Worcester Palladium, and me and a friend will be embarking on a great quest out to the wilds of Western Massachusetts to experience them live. Even the supporting acts sound cool (though I know absolutely nothing about either): Holy Grail and Seven Kingdoms. The whole thing is shaping up as so medieval that I may have to wear armor to the show or something. Or maybe a steel cod-piece.

In short, it’s a very good time to be a Blind Guardian fan. If you haven’t experienced them yet, go to it.

To read more about Blind Guardian, go to their Web site: http://www.blind-guardian.com/.

Great post. Agreed pretty much all along the line (particularly what you were saying about the possibility for embarrassment being redeemed by the fact that the band’s just that damned talented). I will say it’s taking me a while to find my way into the new album, but that’s just because I find it very dense, in terms of song structure and arrangement. So that’s actually a good thing. As with you, I find “Curse My Name” an immediate standout, with “Valkyries” another particularly memorable song.

I will say that I do prefer the new Iron Maiden album. But, you know. Iron Maiden.

(And I want to stick up for Kamelot, who you mentioned in passing. I find they’re less straight-ahead fantasy than Blind Guardian, what with concept albums based on the Faust myth and epic songs based on Elizabeth Bathory and so forth, but still very good in their own right. Haven’t picked up the new album yet; we’ll see how that goes.)

Thanks Matthew. The new album is also a “grower” for me, with Tanelorn, Valkyries, and Curse My Name real standouts. I’m undecided about the rest of the album but I think with time it’ll get better.

It’s funny, the new Iron Maiden has not struck a chord with me yet, but I just bought it at the same time as the new BG and am hoping it will. Maiden is my favorite band and I’ve been extremely impressed with all their new work (since Bruce rejoined in 1999 or so). So I’m reserving judgement on The Final Frontier for now.