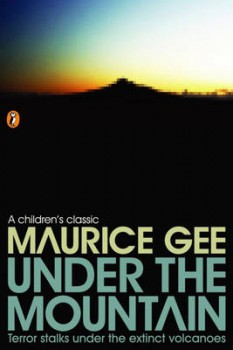 Under the Mountain (1979)
By Maurice Gee

Although not a household name outside of New Zealand, Maurice Gee is one of the island nation’s most prominent and respected novelists. Born in Auckland, Gee established himself as an author starting in the 1960s with his novels A Special Flower, In My Father’s Den, and A Glorious Morning, Comrade. His later acclaimed books include Plumb and Crime Story. All these novels are mainstream adult works, but Gee turned his hand to books for younger readers and made a parallel career in the field of the young adult science fiction. It started with Under the Mountain in 1979, which gained popularity outside of New Zealand with a television mini-series released in 1981. (For more about the mini-series, read my post on its appearance on the Nickelodeon program The Third Eye.)

Why did Gee decide to write a science-fiction book for younger readers? The author explained his choice in 2004 upon receiving the Storyline Gaelyn Gordon Award:

It all began with having two red-headed daughters—not twins though. Then there was my desire to write a fantasy—get away from the real world of my adult novels—but set it in a place New Zealand children would recognise, so that they might get “our story” feeling. What better place than Auckland’s volcanic cones? It was seeing Mt. Eden looming in the mist one morning that really got it started. Everything, monsters and all, followed from that.

It ended up as his best-selling book, never out of print in its home country. But, unfortunately, not so easily available in the U.S. It struggled even to get published in New Zealand in the first place, and finally ended up first released by the Oxford University Press. It has had a long home with Penguin since then.

Under the Mountain uses the popular conceit of “linked twins,” something Robert Heinlein uses in Time for the Stars, for a story that mixes alien invasion science fiction with some of the tropes of fantasy. An Old Wizard figure mentors two budding sorcerers with a destiny to fight almost demonic creatures intent on destroying the world . . . that’s essentially the outline of Under the Mountain before substituting telepathic powers and alien beasties for magic and demons. It has a lot in common with Susan Cooper’s Over Sea, Under Stone, the first and most magically subtle book of “The Dark Is Rising” sequence, in which children come under the tutelage of immortals caught in an ancient struggle with great evil.

Twleve-year-old twins Rachel and Theo Matheson go to spend the summer with Uncle Clarry, Aunt Noeline, and cousin Ricky in Auckland, which is the big city to the two children from a farm. Their relative’s house sits on Lake Pupuke, formed from an explosion crater, near the the volcano Rangitoto, which means “bleeding skies”—a name that already stirs some sinister thoughts.

The twins have telepathic powers, but they have largely abandoned them because they wish to be individuals and they see their powers as part of that “twinness” they want to escape. Gee brings this idea in abruptly, something that develops entirely between the first and second chapter out of the reader’s experience, but it works because of the naturalistic way the twins feel about—something that belongs to them, but which they don’t wish to cling to. You can imagine the two of them growing and up simply forgetting they ever had any sort of paranormal abilities, they same way adults grow out of many childlike things. As the telepathic powers grow back, Gee uses the visual concept of dropping pebbles into a well to describe how the wins places ideas into each other’s heads, and “pebbling” turns into a useful verb to describe Theo and Rachel’s communication.

The twins have tried to abandon their strange abilities, but they can’t escape a destiny hinted at in the first chapter, which occurs eight years before the main action in Auckland. The young Theo and Rachel become lost in the bush, and a mysterious and powerful figure, in the shape of an elderly man, comes to their rescue. Before he leaves them, he indicates that they have an important role to play in the world and he will call them when it is time to do their task.

The twins keep the strange memory of the rescue to themselves over the next eight years, and when they arrive in Auckland, the find the enigmatic old man lives near their uncle and aunt’s home. He is known as Mr. Jones, and he telepathically tells the twins that he has called them for their task, and to beware the strange couple who live nearby, the Wilberforces. The Wilberforces already have projected a sense of menace toward the twins with a strange, horrid smell that only Theo and Rachel seem to detect.

Mr. Jones, while training the twins to use their various telepathic powers and to wield two potent rock artifacts, explains the cosmic background of the war in which Theo and Rachel are now the central pieces. The Wilberforces (the general name that Mr. Jones uses to describe the species) are slug-like beings from a planet of mud who have a symbiotic relationship with giant worms that are vital to creating other “mud worlds” for them to conquer. (I wonder if Maurice Gee read Dune. Hmmm. . . .) Mr. Jones’s species opposed the Wilberforces’ conquest of planets, and eventually the long battle ended with both races nearly extinct. Earth is the last war zone, and the Wilberforces have waited centuries to wake up the worms from beneath Auckland’s volcanoes to drown Earth in mud, while Mr. Jones has searched for the linked twins who can wield the weapons to destroy them. However, the last pair he found didn’t fully survive the ordeal. Rachel and Theo are the last gambit, because the Wilberforces are almost ready to set their long-brewing plans in motion beneath Mount Eden and Rangitoto.

Gee’s writing is clean and fast, and events even faster; Under the Mountain moves so rapidly it’s possible to read the book in one sitting—although I wouldn’t advise it, since even with the straightforward prose, Gee creates moments to savor, such as the weirdness of the twins’ first journey into the tunnels when the Wilberforces in their various forms pursue them. This is a truly scary passage filled with claustrophobia and the feeling that the heroes are up against impossible odds. It also concludes with a great piece of strange organic tech. Gee also creates a terrifying section (vividly recreated in the mini-series) when a Wilberforce disguises itself as a policeman and tries to drag to twins from their aunt and uncle’s house to drown them in the lake—and Mr. Jones is nowhere around to help. 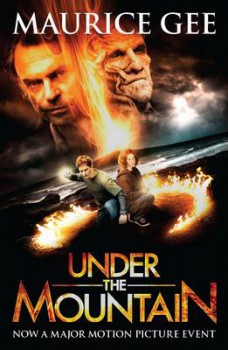 The book has one weakness, which starts to emerge as the climax closes in. The key to stopping the Wilberforces is a bit of hocus-pocus that comes across as too fast a solution for such an epic conflict, along the lines of “toss this rock here and say the magic words!” Still, Gee manages to write a breathless and grotesque finale as the twins and Mr. Jones wind beneath all of Auckland in the race to destroy the slugs. The conclusion is spectacular and surprising; I was genuinely shocked with how Gee chose to end his “children’s story.” This is a war with consequences, regardless of who wins, and the book doesn’t allow the reader or the Matheson twins to walk away easily.

If Gee originally aimed to give the boys and girls of New Zealand a taste of their “own story” with the Auckland setting, he also gives foreign readers a wonderful tour of the place and makes it live on the page. I can’t speak from experience as I’ve never been to Auckland, but Gee’s writing has a feel of authenticity that tells me he’s perfectly captured the location and its unusual culture. Auckland is the “big city” of the island country, but Gee invests it with the feeling of a mysterious wilderness filled lake craters and volcanoes and bays. Here’s a reversal of “city kids go the country,” where the city feels more like the weird rural places of other YA books.

Aside from the television mini-series, which is a permanent part of Kiwi popular culture, Under the Mountain was adapted as a theatrical film last year, starring Sam Neill as Mr. Jones. Although it had the participation of Weta Workshop and New Zealand’s top filmmaking force, Peter Jackson, it went straight-to-video in most countries. I haven’t seen it (yet) but I’ve heard that for all its higher production values it can’t match the original charm of the mini-series.

Gee has written further children’s books that have earned praise (most notably The Halfmen of O, which I must seek out now), but Under the Mountain is the sort of perennial that you can rest your entire career on, as the author has noted:

Children like Under the Mountain and tell me so. That makes me feel really good. But just as enjoyable an experience I’ve started to have lately—the people in their twenties and thirties who, hearing my name, say, “Did you write Under the Mountain?” I’ve had it from bank tellers, airline clerks, a courier van driver, the man who came to water-blast moss off my garden path. They’re getting older. The book seems to get itself remembered by some bit of magic that I don’t understand. And I wonder if at some distant date—very distant I hope—as my coffin slides into the hearse, the undertaker will be heard to murmur, “Maurice Gee? Ah yes, Under the Mountain.”

That “bit of magic” Gee mentions is the ineffable something the finest of young adult speculative novels grasp that turns its youthful readers into fantasy and science-fiction dreamers for life. It’s the thrilling ambivalent feeling that says inside you: “This could happen to me, and wouldn’t it be great if it did? Or maybe it wouldn’t be . . .”

Under the Mountain wasn’t that first fantasy discovery book for me—I only read it for the first time last week. But it could have been. It does have the magic.